Hi guys, I will be honest. I have held off on buying Lightburn for sometime now, because I honestly don’t need it. Everything I do is done from Corel and set to the DSP through either RDworks V8 to my 6445G or LightObject’s Laser Software to my T9. I have never seen the need for the camera deal because I just cut cardboard templates for alignments, etc… That being said, there are some features that Lightburn seems to have that has become very attractive, especially since I have been building whole machines for other people now.
Anyhow all that being said, I really need to know if there is an alternative camera that can be used. I don’t really have time to wait on unknown shipment progress if I can find alternate methods to achieve this feature.

In theory, any USB camera can work, but I can only tell you what lens angle / mounting heights would be needed for the cameras we sell. I haven’t taken measurements from anything else.

I’ve used a Logitech C920 and a few different ELP cameras from Amazon and they work, but you’d need to figure out mounting solutions.

I also love the “all I use RD for is to send to the laser” argument. RDWorks is slow. Once we have the T9 supported you’d be able to use the same software to talk to both machines, too.

First off, thanks for the info on the camera.
Secondly what I said was a factual statement, not an argument. That is literally all I do with either one of these programs, outside of setting arrays and defining block processing for individual completion of each task before moving to the next set.
Admittedly, the video you posted is impressive. But as an actual “argument” I never do any of that stuff with either laser UI software because I don’t really see the need. (That is not to say others don’t)
I’m just not sure how it’s really relevant for me personally. If I have something that needs fixed I just roll back to Corel and do it there in short order, then resend the file at which point it’s nearly instant and ready to go.
You honestly don’t need to convince me that Lightburn is better. There is no contest in that regard and it’s backed up with why so many choose to purchase an $80 program vs a free one.
It makes even more sense for those who want to do most of their work from a single standalone UI. And the tracing ability of Lightburn is far superior to any other choices I’ve seen yet. Even inkscape does a better job of this than Corel. That being said, I rarely use vector traces for fill rasters, unless I intend to outline trace said raster. This is because I generally diffuse/halftone my images, especially for low contrast photos which in turn prevents over saturation and preserves details. Maybe Lightburn has a feature for this as well, I would know yet as I have just started to look at Lightburn more in depth.
Anyhow on another mentioned topic, both RDworks and Lightobject’s UI is essentially broken in the plugin department with Corel X8-2020 and the newer version of AI. That being said, I’m not your typical user that would have just thrown their hands up and either reverted to X7 or looked for an alternate solution. I dug into both program installers and discovered they where unpacking .dll and other files into the wrong system folder location and fixed them both in about 20 minutes.
I’ve created a repacked .zip for both of them and stored on my google drive for others to download and have essentially fixed the issue that the programmers couldn’t seem to do for the last 2 years.
Pretty sad. I’ve even sent the repacked folders back to the programmers so they could revise their mistakes with a patch, but I’ve yet to see either of them actually implement the revisions, so what ever…

Lastly I would be most interested in seeing you get Lightburn compatible with the T9. The T9 is actually a better controller than the more expensive Ruida 6445G to my surprise. Mostly for one simple reason. They incorporated a physical output for the U axis. This is where Ruida has dropped the ball. You have to literally disconnect the Y axis from the board to plug in a rotation tool in order to use that feature. This was incredibly stupid on the manufactures behalf. With the T9 you can simply plug the rotation tool into it’s separate port and set the job parameter to “rotate” in the dropdown menu before you send the job to the DSP. This is far easier to setup and still allows you to control the Y axis from the DSP’s arrow buttons instead of making the function dead in the water. Again, incredibly stupid via the designer. The only thing the Ruida has over the T9 that I have found so far is a better DSP control box. The onboard screen, button layout and menu is better laid out and aesthetically more appealing. But I’m pissed that I paid more for it only to lose what I had considered a basic function that I had mistakenly assumed was a standard practice… Oh well.
So… To that I must ask. When do you plan to bring us a complete Controller/DSP to market???
I’d pay $5-$600+ for that if you ever get the wild hair. Maybe more if it addresses things in the manner you do with your programming. Just say’n! Give it thought for the sake of us all. We’re in the golden age of laser home-builders right now. It would be the perfect time.

The video is intended to show how long it takes RD to process and send data to the laser compared to LightBurn. It’s also worth noting that for most vector work, LightBurn produces more efficient cutting paths. An Eiffel Tower model (with lots of small cuts) takes 26:30 when output from RDWorks and only 24:45 when output from LightBurn. If all you do is engrave, the difference won’t be as significant.

LightBurn has a variety of different image dithering options, including Halftone with an adjustable cell size and angle: 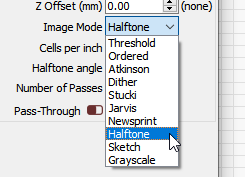 When do you plan to bring us a complete Controller/DSP to market?

It’s something I’ve considered, but if it did happen it would take a considerable amount of time to develop and bring to market. I have my hands pretty full with just software and support for the moment.

A controller will be great!

Well I am sold on the software, so I will be purchasing it and have already sent a client to purchase the software for the machine we’re building. Now just to get you motivated enough to GET THAT CONTROLLER BUILT!
I do understand the overhead of such a task, but man would it be a game changer to have an entire DSP/Controller/Software package from US made LightBurn. You’d sell out so fast it would make your head spin. That being said, when you do decide to take the leap… And you will… haha
I want first dibs on one!

Now you gotta make it! Prototype is already rendered! 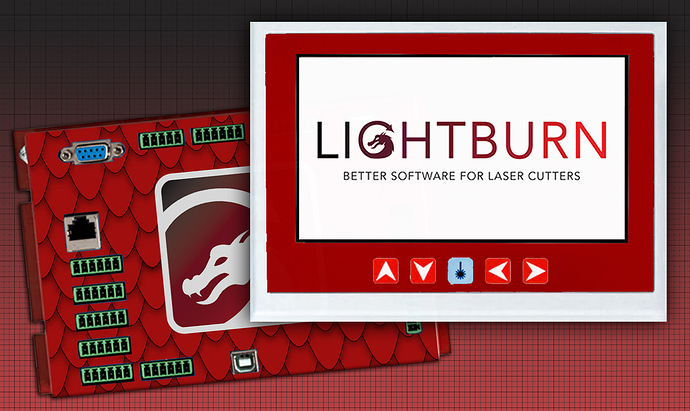 Now just to get you motivated enough to GET THAT CONTROLLER BUILT!

I have a suggestion …work out a licensing deal with LightBurn to endorse a controller that you develop… this will allow @LightBurn to wrap up the development of the needs many are asking for first.