I am making an engraved map of a state and want to include the riverways.

The issue I am running into is that the data provides the riverways as filled shapes. But when viewing the entire state, they are indistinguishable from lines.

I want to engrave by simply tracing the lines, but right now it will go over each river twice as it traces the outline. I would like to convert the 100ish rivers to single lines automatically somehow.

If Lightburn can’t do it, does anyone have any ideas of how to get this result?

There’s no automated way of doing this in LightBurn.

Can’t think of a really clever way to do this but you could try isolating the layer for riverways, converting the vector to a high quality raster image, then use a centerline tracing feature in Inkscape or other program like Illustrator to convert raster to a vector using only lines.

Does inkscape have centerline tracing for bitmaps? That would probably be fine. It doesn’t need to be amazing accuracy. I have just never seen that feature in Inkscape but it would probably work!

Indeed it does. And note that Inkscape has had a major update very recently. 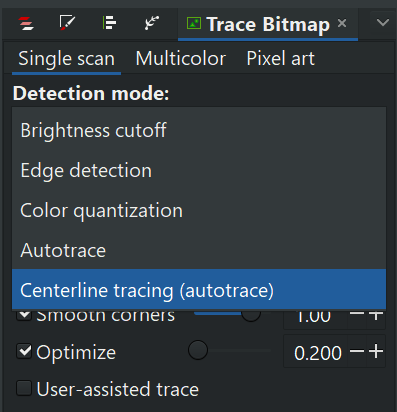 Welp, that did it. I just selected all 700 rivers, converted to bitmap with one click then centerline traced it. And it all worked exactly how I wanted it to… that was… unexpected. Thanks!