I have laid out a series of repeating shaped to be cut. I laid them out to maximize the space by snapping them next to each other. When I set up the laser to cut, the laser cuts around each shape, going over the common side twice. I am sorry if this is confusing but I am not sure of the terminology or that exactly I am trying to say, so some help with that part would be appreciated too.

Is there a way to increase cut time by stopping the laser from duplicating a cut on a common line? I think the pic will explain it better. Just imagine the laser cutting around each shape. 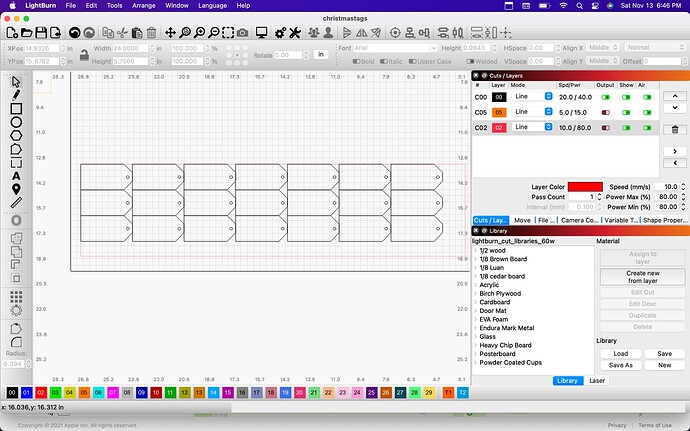 Answered my own question by accident. I was searching on how to square up one shape to another and came across the answer to this question. Unfortunately, I did not figure out how to square two shapes to another.

Here is the answer, and boy did it work slick! Square tool - *We need to be able to select each of the 4 sides to this square individually so that we can layer them with different power settings - #3 by Rick

Here is an option. If you don’t want to burn overlaps, you could build your file like attached. I created it in 4 different virtual arrays, with each array on a separate layer. You could do all of the virtual arrays on the same layer.Tag.lbrn (20.1 KB)

Under the Console tab->Optimization Settings, have you tried “Remove overlapping lines”?

They have to be exact duplicate lines for LB to remove one of them. In this case, it wouldn’t remove the short line segment on the edge of the tag nearest the hole, because the overlapping line on the back edge of tag is larger.

@JMichael that is how I ended up doing it. I broke apart the array and removed the duplicates, which it did for the long sides. Like @RalphU stated, it did not remove the short line segment. Those got double burned.

@RalphU, I am not sure I 100% I understand what is going on with the file you attached. It appears you had the break apart the single tag into the sections then figure out which sections could be grouped together to be cut without overlapping? You next put each of those sections on a layer. The way I did it took about 2 min less, but there was overlapping. Your way has zero overlapping but took longer and I think probably took longer to map out…or at least for me it would. I am going to try it though and see what I can come up with.

When you created the arrays, did you do one tag and set up the four layers then do the virtual array?

When you created the arrays, did you do one tag and set up the four layers then do the virtual array?

I did each color as a separate virtual array to show the different steps. If all of the virtual arrays are put on the same layer, when LB sends to laser (it flattens all virtual arrays), you could just optimize by layer.

Well, I will definitely need to read up on how to use virtual arrays then because I believe I have the concept but operationally I never could pull it off.