This is my first attempt with LightBurn on my 20w diode diy laser. As you can see in the photo, I’m getting burn holes.

How do I reduce this effect. Also it’s leaving tabs were it’s skipped slightly. 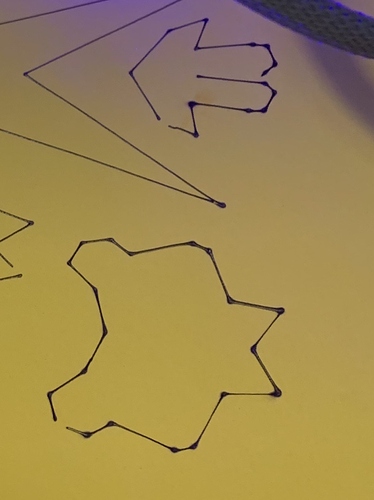 Which version of GRBL are you using, and which driver in LightBurn?

If you have GRBL 1.1F or later, use the “GRBL” driver in LightBurn. If you have older firmware, the only option you have is to run slower, with less power, so the speed changes at the corners don’t affect things as much. Grbl 1.1f allows variable power (M4 mode, instead of M3) which varies the power as the speed changes for corners, and produces a much more even burn.

Thanks Oz, I only have an earlier controller. I’ll give slowing it down.

Could you recommend GRBL m4 controller with a double Y axis.

I don’t know of any with a double Y axis, sorry.

Which 3 axis Control Board would you recommend?

I reduced the speed and power and tighten my Y axis belts. And now it’s cutting so much better. All issues have gone.

Thank again for your help and quick response.

A Smoothieware based board running GRBL-LPC is significantly faster at processing, and will handle image engraving with higher detail much better. If you’re only planning on cutting, what you have is likely fine.

Good to know, thank you.