I am having 2 separate issues

(1) When I tried to calibrate my camera, it would not do so properly. It kept saying that it did not see the image. When I finally thought I was done, instead of a clear image of the bed of my laser, it was at an angle, with the back corners “cut off” so it was a trapezoid shape instead of rectangle.

(2) Now it is crashing, I have received this message when I tried to “update” the camera overlay. And yes, lightburn does have permission to the camera. This occurs no matter if the camera is plugged in before lightburn launched, or after. And it does not matter what file I am using either, whether its an existing file or a brand new one. 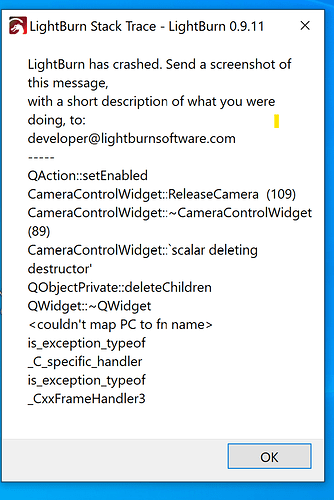 Starting with the calibration, can you show what you see in the preview window before taking a capture for the calibration? We have some tips for calibrating here:

These are the most common reasons for difficulty with camera calibration: The camera doesn’t need to be on the machine for the lens calibration - It’s ONLY the lens and pattern that matter for this part, and the pattern can be scaled up. If you do it on the machine, if you have a honeycomb bed, cover it (bedsheet, paper, wood, etc) - the pattern gets misinterpreted as more circles and confuses the software. The printed circle pattern has to be as flat as possible . Glue it to wood or f…

Get through that first (and post here if you’re having trouble). Then you do the camera alignment, and then you can use the update overlay feature. 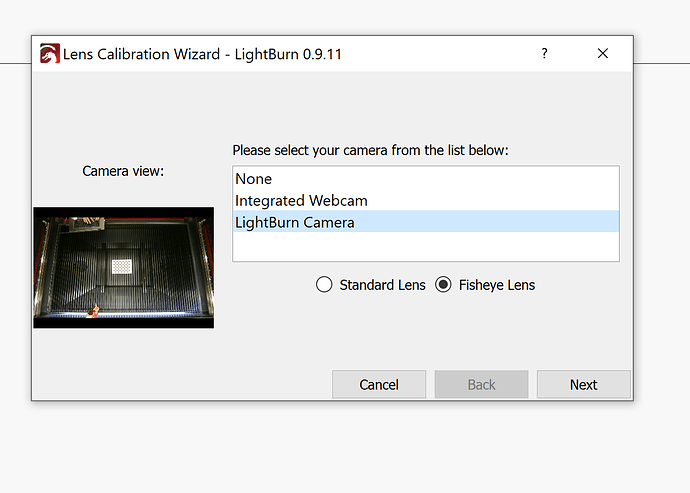 This what is on the screen BEFORE I hit the capture button: 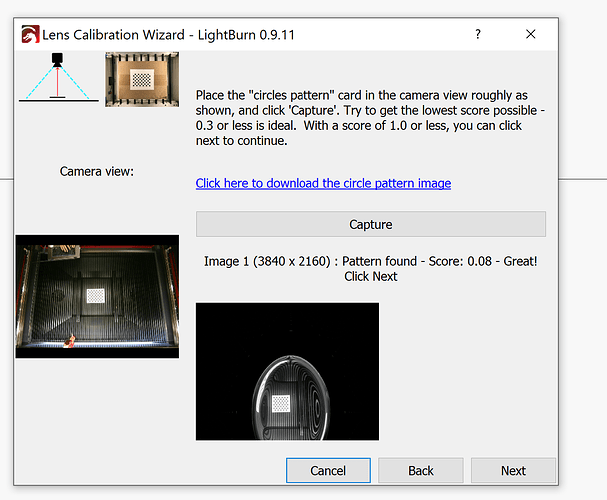 Ahh - That’s part of it. You’re capturing a postage stamp sized pattern - it should fill roughly the same amount of the camera view as the sample image shown there. You’ll need to move it closer to the camera, or print it larger (possibly both).

I can’t tell from this image, but you might need to mount that image to something too - It doesn’t appear that you have, and if the paper is curled at all it will be interpreted as lens distortion.

I’ve had my camera for 5 months, and have used the same template without issues in the past . . . so I’m really at a loss here. Any help is greatly appreciated.

Like I said, you can move it closer to the camera instead - The ideal size is about 1/3rd of the camera view height.

If you’re having trouble with the camera with the newest version, you can try switching back to the older camera capture system by changing the capture system setting here: 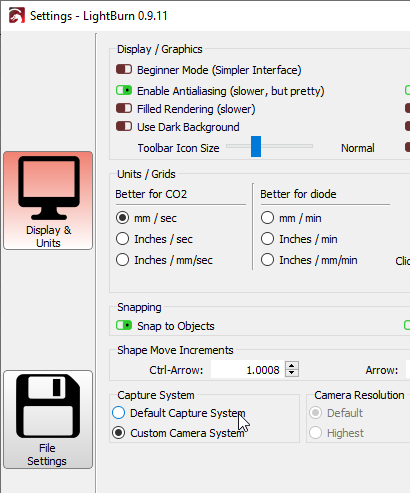 Change that from Custom (the newly written capture engine) to default (the old system).

If you can make it work with the new one, it’s preferable, but the newer system might require up to date graphics card drivers, and is ‘closer to the metal’ than the older system.

Sorry to ask silly questions, so I should hold it in my hand closer to camera (since camera is already mounted on lid of laser)? I only ask cuz thought I read something that I shouldn’t hold it cuz it might move around.

You’re right that you shouldn’t hold it if you can avoid it, as it will likely move and make the image blurry. I usually rest it on a big cardboard box if I need to move it closer.