Camera setup will not go to third step

In stalled light burn camera from cohesion3d. when doing the calibration it will go beyond step 2, repeats same location of right side. Getting acceptable reading with first two steps, but does not show me moving to left side as I have watched in videos. No honey comb installed just solid back ground.

How do you mean? Is it saying “Good! Press next” and not letting you press the Next button?

It allows hitting the next button, and but keeps repeating step 2. 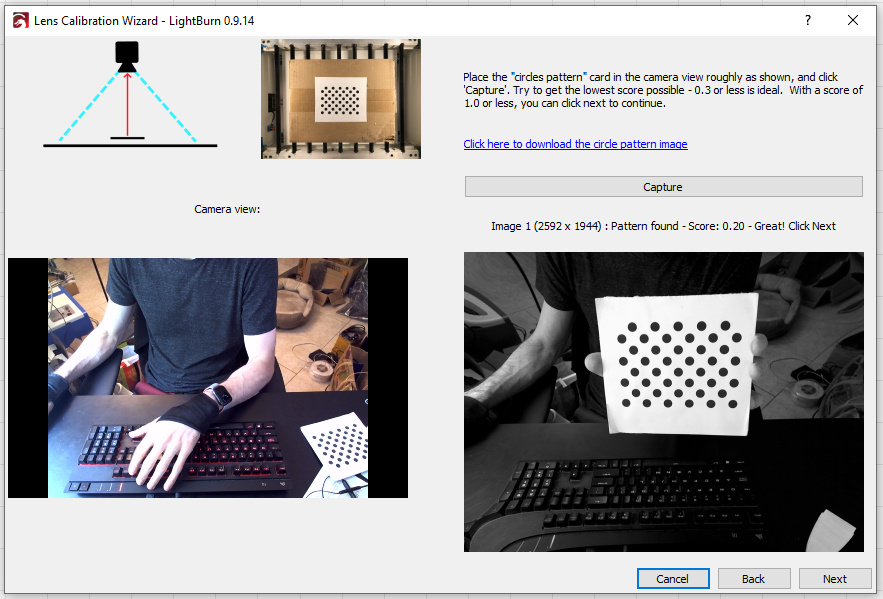 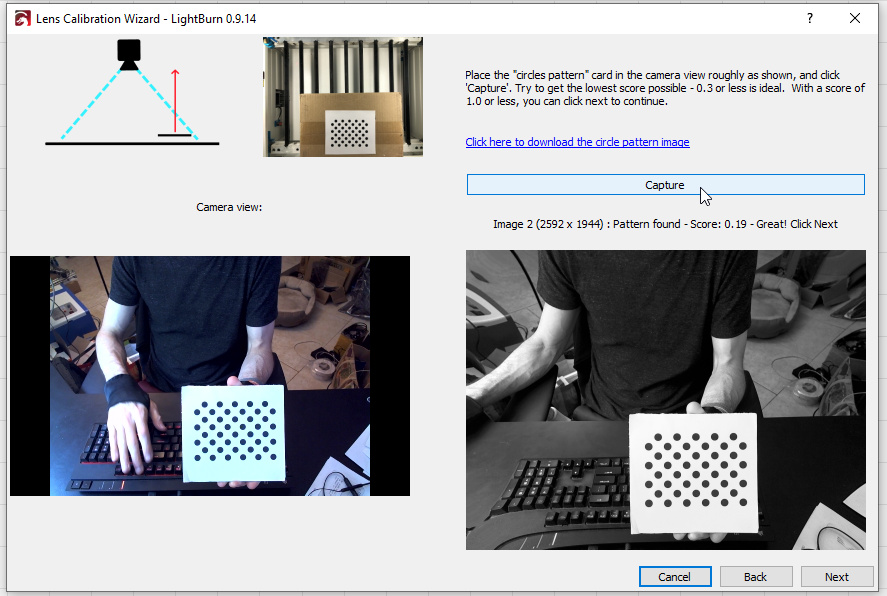 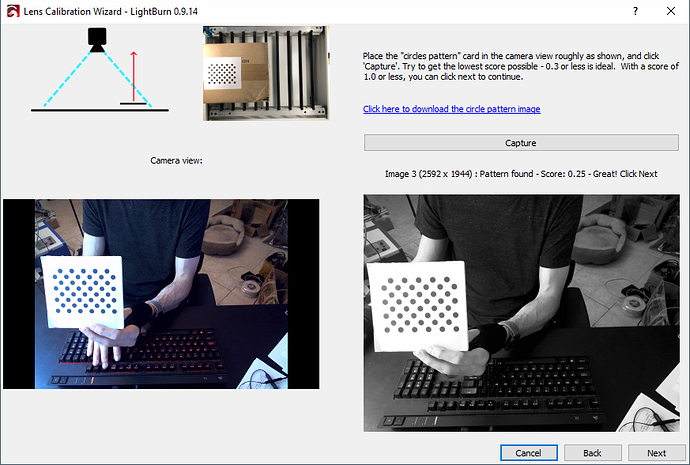 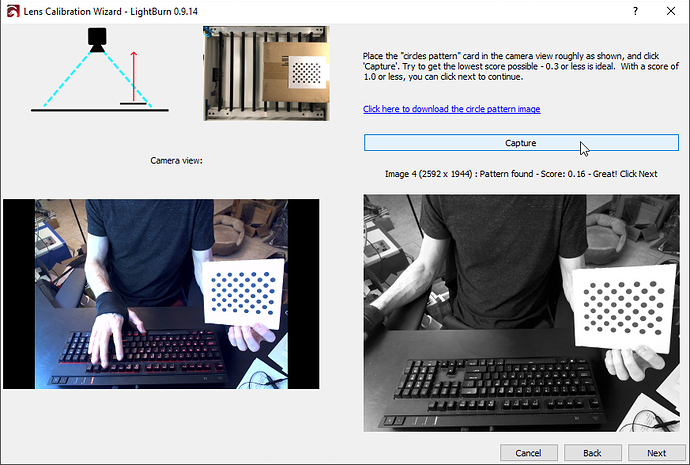 Notice that in each step it’s telling me a different image number, and the position of the pattern is changing in the little sample view up top. Are you saying these things are not changing for you?

wonder is the keyboard messing things up,being in the photo I mean

Those are my photos of everything working properly, and the keyboard is not causing an issue.

As i get to step 2, step 2 just repeats it self with the pattern card showing tilted of the right side of the machine. never does it show in the little window to do it flat on the right. I stepped through the next buttons several times an it never changed from step 2 directions. step 1 shows it centered and flat.

You understand that your description is not the same as a picture? I might spot something in the interface that wasn’t intended, or perhaps a cue you’ve missed. You’ve described the issue several times, and I’ve been through the process and haven’t been able to reproduce what you’re describing. You can post a picture (or series of pictures) to show what you see, and hopefully I catch something, or we’re at an impasse. 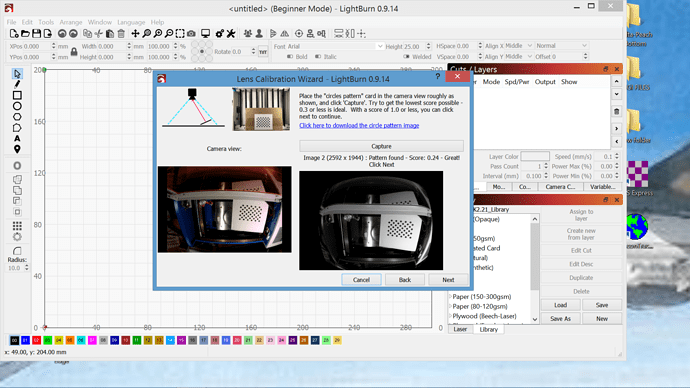 Here’s what I see: 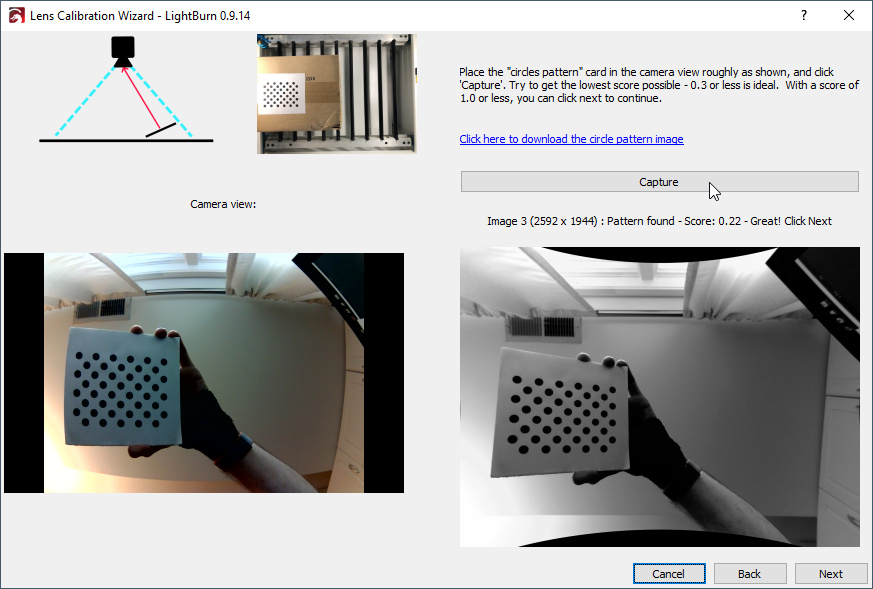 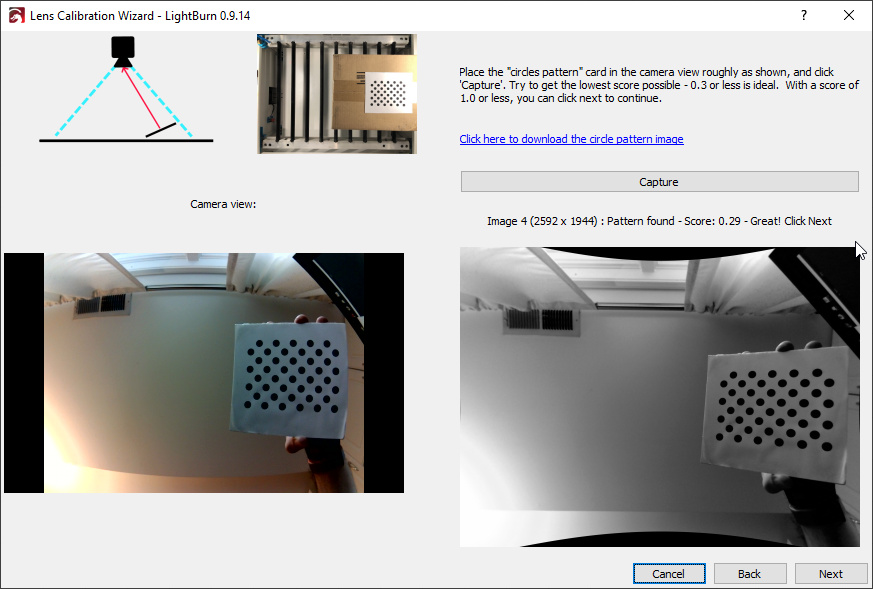 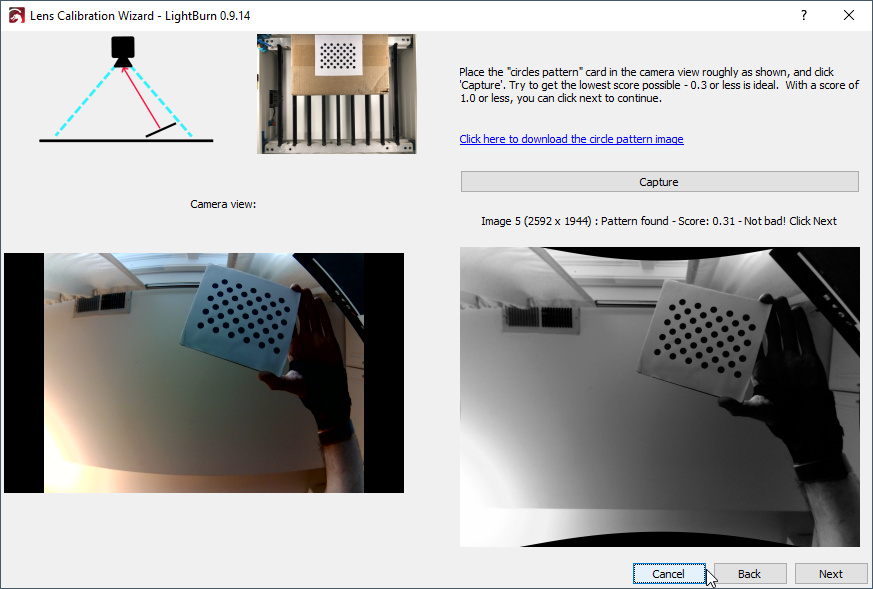 You can see that each time I capture it tells me ‘Click Next’. I do that, and the sample image changes to show me which entry to do next. You’ve only shown a single picture, so I can’t tell if your sample image is changing or not, or if the image number is increasing (mine says Image 2, Image 3, Image 4, Image 5, etc to tell me which one I’m capturing).

I’m trying to figure out if there’s a genuine bug here, or just a misunderstanding of how this works, but you’re not giving me what I’m asking for. I need to see what you see at each step, because I’m not able to reproduce what you claim is happening. 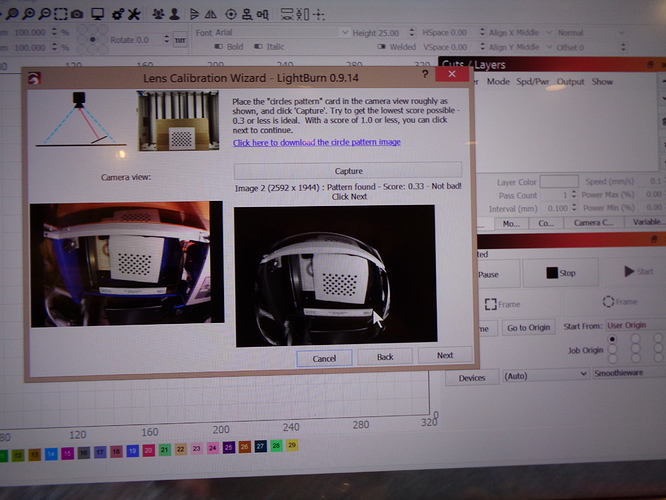 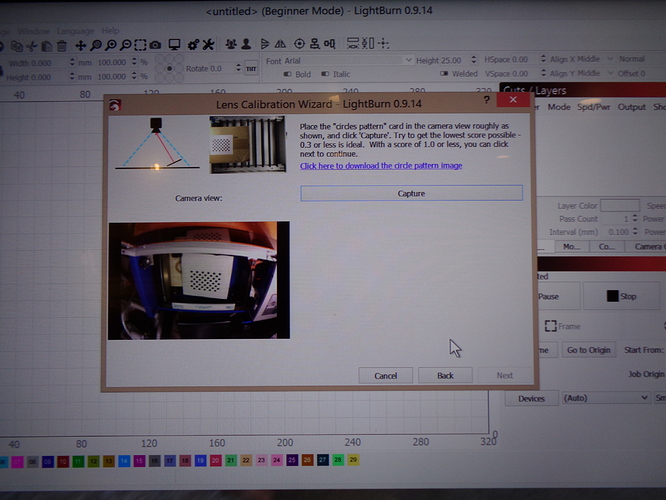 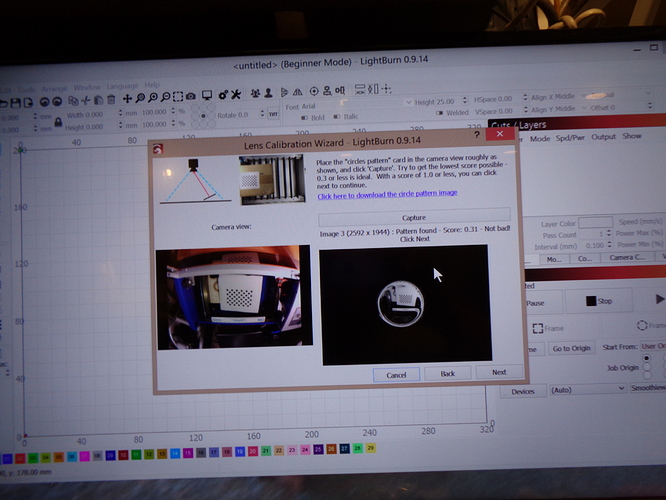 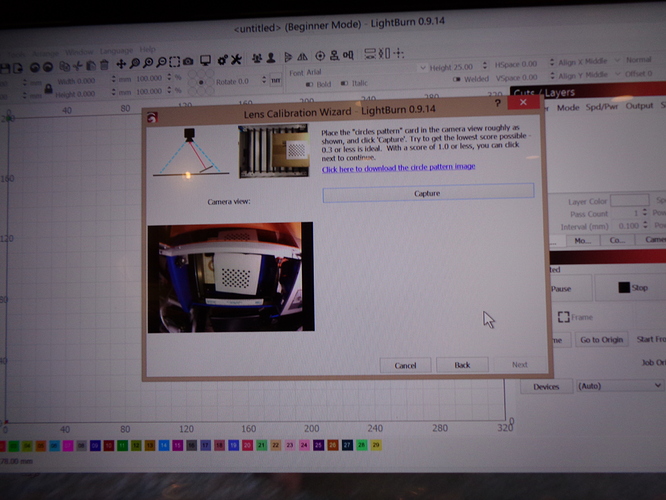 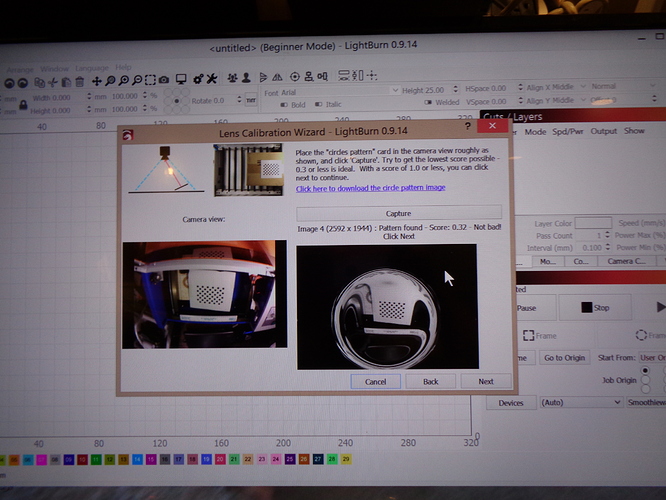 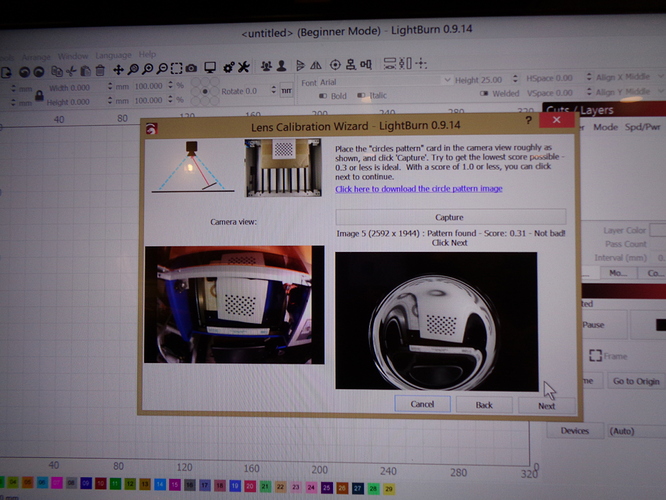 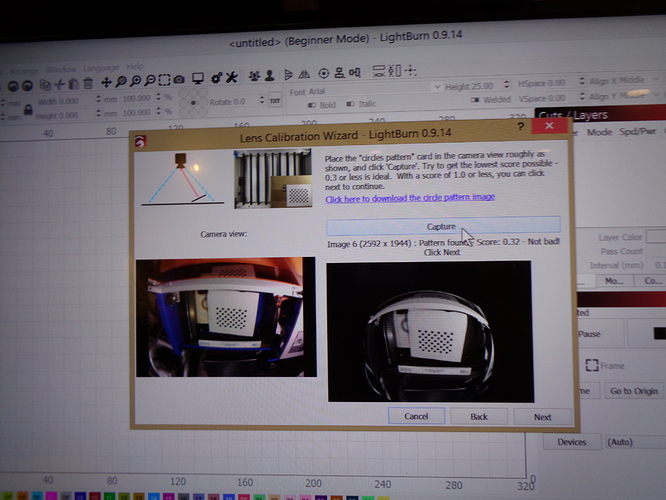 You don’t appear to be moving the pattern card around like it’s asking you to:

If you don’t move the pattern to the different parts of the camera view, the system can’t accurately measure the curvature of the lens.

I watched the video of how to set it up, like a tic tac toe. will try it tomorrow.

Success, cut piece of cardboard to cover whole area and followed directions which was probably the problem. Take notice of pattern position show in window and not the graphic showing card position. YouTube video several times, any every thing will chug along, Thanks for your patience. The worst student is a retired teacher with a lot of time on his hands.

A honeycomb patterned bed looks like circles to the code that tries to find the circles pattern, so having the honeycomb bed visible confuses it, and it gets stuck trying to work out where they all are.

You don’t have to have the camera in the machine at all to do the lens calibration part - it doesn’t have anything to do with the laser for this, just the lens and the pattern card. Since the first thing everyone does is mount it to the machine, that’s out the window, so the next best thing is to cover the honeycomb pattern with a bedsheet, chunk of cardboard, sheets of paper, etc. You’re just hiding the honeycomb pattern so the camera doesn’t see it - nothing special.