I have a curious issue with my Creality CV-30 Laser Falcon and files created with Lightburn.

Curves are not closed at the end but offset by up to 1 mm. The picture below is from a 20 mm wide engraving. See at the bottom of the left eye of the smiley and also a bit on the lower left of the mouth.

The gCode itself is correct. The end position is exactly the same as the start position.

The issue happens with any speed I set in Lightburn.

It also isn’t because of switching from G1 to G0 commands, it also happens when I replace the G0 with G1 so that the laser stays on all the time.

I would also rule out a mechanical issue since I checked, tightened and aligned everything at least twice. Also this is not my first laser, I’ve owned a dozen (hobby) laser machines already. 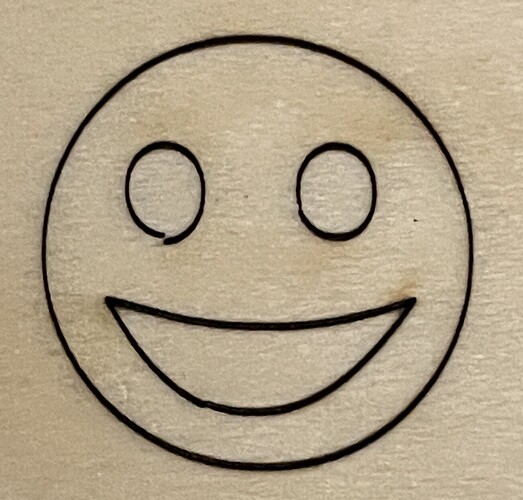 With which I have another issue:

It doesn’t save any $xxx=yyy I send it via CoolTerm.

It does reply with OK (twice) but when I use $$ to view the settings it hasn’t changed to my new value.