I have two PNG files that overlap to create one image of a geometric design. Each PNG file has different cut settings for visual interest.

Is there a way to scan/engrave both images simultaneously with their respective settings instead of engraving the first image and then going back to engrave the second image which effectively doubles my cut times?

I originally had one file set as a vector cut and the other as a raster but I found it easier to control the line weights if everything was cut as a raster image.

The only things which come to mind for me are merging the images into one image being sure to manipulate each image so that when rastered they have the effect you want for that area. Using dithering there is only one power setting but the density is defined by the contrast and brightness of the image. Grayscale would give more control but lots of firmware seem to be iffy on how much range the grayscale has. As you probably know, grayscale engraving varies the laser power based on the gray scale.

Thanks for the response, Ill give it a try

We do not offer this ability within LightBurn at this point. We did recently add to ability to scan several images at the same time, but they need to be on the same layer. 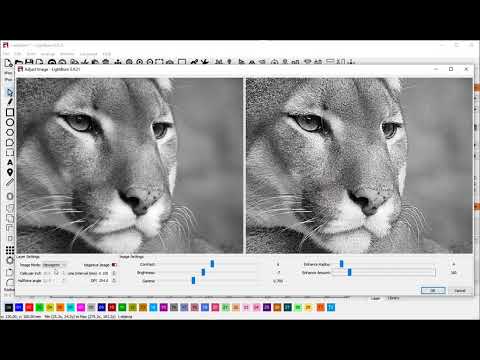