I’m attempting to calibrate our new JTech 7W diode laser for Gray Scale images. I can’t seem to get the settings correct. I can post my LB device settings, Machine settings, the test image and the test result. But it only allows one file.

Any help or thoughts would be helpful!
Thanks!
Jeff 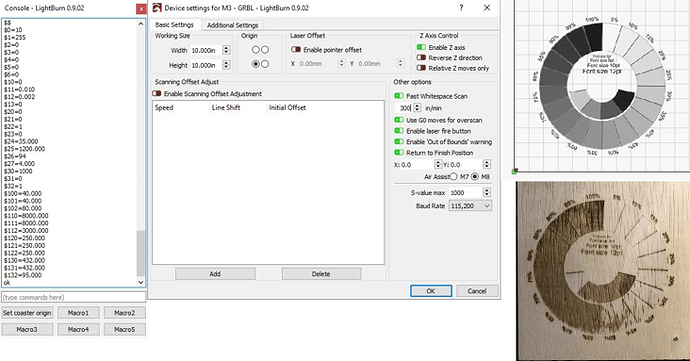 I have the same laser. I copied by grayscale image into a project about 6 times, set the power to 100%, then changed the IPM. I found that the sweet spot was 100 to 130 ipm to get most of the levels of gray to show up. Some of the lower gray levels are just too light to work.

Shouldn’t you be using the M4 instead of M3 control for your laser as it supports power control by pwm? It would entail setting up as a different controller. My 7w uses M4 and it shades superbly.

Thanks, Donnie.
I will try reducing speed to the sweet spot range you mentioned. I’m running @ 200ipm on that pattern I posted.
I’ll follow up and let you know if that helped! Will probably run some tests this weekend.

Hi Phil,
I would guess I should be (and am?) running M4 over M3, but I don’t see where or how you set that? I have my controller running the generic GRBL. If you are referencing the title header for the middle window in my posted image “Device settings for M3 - GRBL”, the “M3 - GRBL” is just the name I gave my machine. I run the laser on my MillRight M3 CNC. I have another profile for my Millright PowerRout CNC. I’ll do some research to see if I am indeed running M4 over M3. I agree it should be M4.

OK, I finally got back to making some scale wheels at different speeds. There doesn’t seem to be much of a gradient.
First run was at 150 IPM, and that was better than the first attempt. Second image was at 130 IPM and that seemed improved over 150. However, in both cases, there isn’t much of a gradient. See the image I attached. The Z height didn’t seem to affect much. the letters and numbers appear just as crisp in both cases. Right now, Z.25 equates to the laser being about 2.25" away from the work piece. Z.5 would be about 2.5". 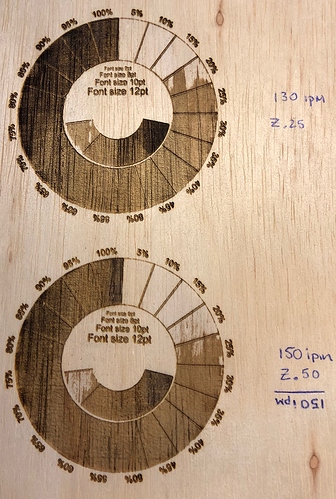