Fill issues since upgrading to 0.9.04

Upgraded today to 0.0.04 and i have a file with some fill and cut lines, when i click preview job or start i get a warning with “Shape(s) were set to fill, but were’nt closed. These have been removed as they cause problems”

it works as it should and the job completes perfectly fine but this popup on every job is very annoying and not needed, can it be disabled somehow or does the warning actually mean anything?

Yeah, it means you’re trying to engrave open shapes. You can go to edit -> select open shapes set to fill, and it’ll select the exact ones you’re messing up on. Likely you need to optimize your design. Did you do your design in LB or another program?

Every once in a while this means that there’s an empty object in the file. I haven’t tracked down everywhere these happen yet, but if you do a drag-select around the origin point and catch something there, you can delete it.

Heres the thing, i have 1 design that i’ve been using for around 3 months in the old version so i know its not the design, i do an upgrade yesterday and suddenly it finds an issue with the same working file.

This to me would suggest it isnt the file or perhaps only now the new version can detect such issues? If so, can i disable it as i know the file is good?

The check was added, likely after whatever your old version was, but if the file contains open shapes then it’s not “good”, it’s just not bad enough to be noticeable.

Click Edit > Select open shapes set to fill, as Blake suggested. That will select any objects in your file that aren’t closed, but are on a layer set to fill. You can delete them since they won’t output anything, and then you won’t have the error.

Another possibility is that you have text applied to a path shape, and have used the same color for the path as the text, like this: 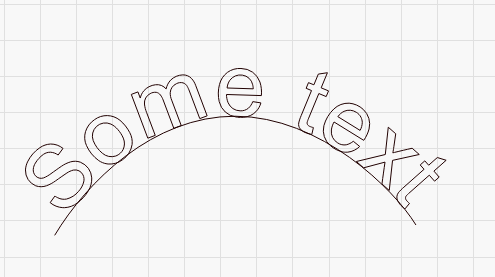 If I have the above text set to fill, the curve it’s applied to is an open shape and won’t output. Putting that curve into its own layer and turning off the output for that layer will get rid of the message.

Thanks, thats fixed it. I had dashed lines which were set to colour the same as text. In the previous version 0.9.02 i never got the error so can only assume this is a new function.

Thanks for the help guys.