Following the infos on how secure a diode engraver

I have closed my engraver and made a system for air extraction and purification.
And here is what i have done

Nice! Very sexy. I hope you’re not ducting that exhaust to the downstairs neighbors.

no the exhaust passes in an activated carbon filter

no, i decided to use it only at full power, even if can be regulated

e reopen this post cause i have a question for you @anon88048707 @berainlb @LaserWillie
as you have seen i have closed my engraver with transparent plexy, but i thought… what about i put this on the surface of plexy? i will obtain something similar to safety glasses?
My goal is only to reduce laser reflection from inside out.
What do you think about?

sorry but the only link i have is in Amazon Italy

I’ve seen people use something similar but usually for a smaller window, not the whole enclosure.

I think the idea is solid. The only thing I don’t know is how you would identify a proper safe material. I’ve seen some places sell acrylic with an explicit OD6 rating like this:
Laser Protection Red Acrylic (OD6 Protection) — makergadgets

But these are usually pretty small and pretty expensive. I don’t know of a good source of large, safe, and cheap acrylic.

the link i put before is for a self-adhesive film that i will put on the outer side of plexy, not inside, and normally i launch the job and leave the room.

I know there are some films that have protective features but don’t know how truly effective they are. I suppose you could test it by shining a light through with a sacrificial material behind it.

Not sure but it’s possible that a mirrored window sheet applied so that the mirrored side is directed toward inward might also work for this.

If you’re looking to simply reduce risk of light exposure this might be of some benefit but I worry that it would give you a false sense of security. At least without proper certification or testing.

maybe this can be of some interest, i have found this farm that sell self-adhesive film certified for laser filtering not only diode
http://www.eot.it/engpage_1/comp/home/home.html

I was looking at similar material yesterday after you brought up the idea of using a film.

This one looks promising. 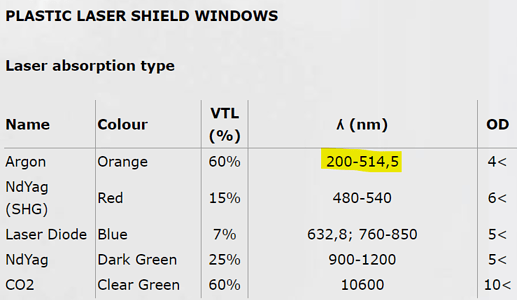 was exactly my thought

I filled the contact form for some infos, when i know something i let you know

Ok i got infos from them and… well i let you judge by yourself, they asked me $340 for a self-adhesive film of 240X143mm… too much expensive for my wallet. I will try other ways

Oh wow. That must have some very specific industrial application to justify those prices. And the oddly small size.