What it is doing here is running the head into the left bracket and off the bed. That causes lots of rattle and step loss. Is there a way to move the green dot, which should be origin, back to the middle? I keep center origin set both in the cut panel and the button on the top bar but sometimes it is put lower left anyway. I don’t know of anything I’m doing differently between designs. I have tried the set origin button in the move panel and it doesn’t seem to have any effect. I keep the machine with 0,0 in the center of the bed, except when it loses it and I have to reset. I usually jog to the lower left, then g0x150y90 to get to the center. I suppose I need to get tuits and install the limit switches so I can home.

I have the same issue randomly with different fonts. When I zoom way out and select everything there is nothing visible in the lower left. Sometimes it doesn’t use that path, other times it does. This file last night worked fine even with the path to the lower left. 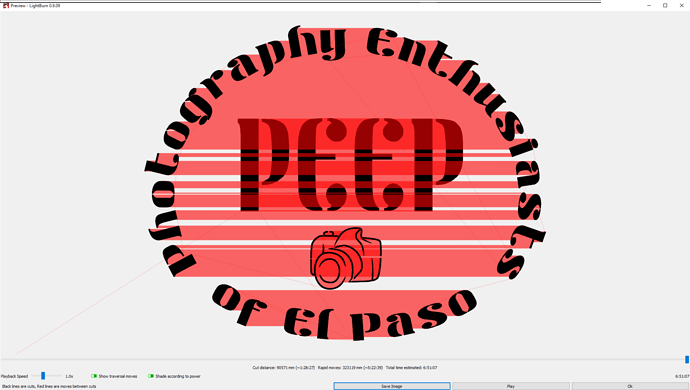 Device settings does not have a center origin, only the four corners. That may be a clue.

If, when the laser returns to the origin point, it’s hitting the side, that means somewhere along the way your machine has lost steps. All LightBurn is doing is saying ‘Return to the pre-set finish position’, which defaults to the origin.

You can set it to be anywhere you like by jogging the laser somewhere and clicking this button:

You can also directly edit the value, or disable it completely, in the device settings here: 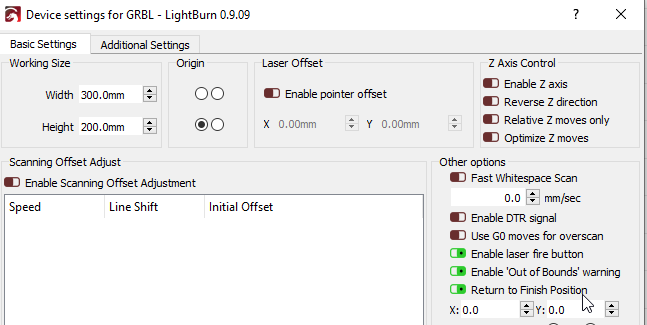 If your laser is losing steps, that moves the problem somewhere less visible, but doesn’t actually fix anything.

When running the job in “Absolute Coordinates” or “User Origin” modes, the laser will return to the finish position if that setting is enabled. If you’re losing steps, I advise you to figure out why - probably from acceleration being too high, dirt or sap on the rails or bearings, not enough motor current, or having your rapid speed setting too high.

It is not hitting the side when returning to origin, it is doing it either at the start of a burn or in the middle of the burn. It returns to the start position after a burn, usually. I do have return to finish 0,0 set in the device settings. The only difference from your screen shot is that I turned off the out of bounds warning since that’s a pita to have to click every time I do a burn. I make sure my design fits when I make it, and I often frame just to confirm. I noticed that the square frame will run to the position indicated by that mysterious path, while the rubber band frame doesn’t, just outlines the pattern and ignores that path. .

Your machine is reporting coordinates in absolute, not workspace. $10 should be zero. Also, check what the controller emits when you type $# in the console and hit enter. G54 should be all zeros - if it isn’t, you have a workspace offset configured, and that could be part of your issues.

The machine was centered when I turned it on and connected it so machine 0,0 should be at the center, right?

Not necessarily - G54 is remembered across runs. If you use workspace offsets (IE, zeroing to the workpiece) when in CNC mode, you’ll have to clear them when using the laser.

I’ll have to remember that command, hadn’t found a way to reset that before. It worked, now returns 0,0,0 when it is centered. A quick test, stop, and go to origin worked this time. Thanks, that’s definite progress

I’d like to find a reference that explains every setting and what it does, haven’t found that yet in a search. the documents on github don’t do a lot of explaining, which I’ve found to be typical of open source stuff, the assumption is that you already know it all which I definitely don’t.

G54 is remembered across runs. If you use workspace offsets (IE, zeroing to the workpiece) when in CNC mode, you’ll have to clear them when using the laser.

That’s not really a GRBL setting, but standard GCode. This page has the GRBL workspace offsets (coordinate systems) on it: https://github.com/gnea/grbl/wiki/Grbl-v1.1-Commands

And this one talks about all the settings and what they do: https://github.com/gnea/grbl/wiki/Grbl-v1.1-Configuration

Thank you. I’ll read those.