Have to increase power after machine warms up

I don’t know if there’s much I can do about this issue, so just hoping for some conversation and enlightenment;

I have an 80W Chinese CO2. Brand is HL-Yeah. I feel it’s a few steps above what can commonly be found on eBay, though is still somewhat of a bargain machine. It has been serving me well, except for this issue: The minimum power at which the tube will fire seems to change. For example, to engrave fine text (2 - 3mm), I use 20mm/second, about 7.4% power. But after a couple jobs at this setting, when the machine seems to warm up, the tube will no longer fire at this low setting so I have to increase the power to around 9% - 10% and then the tube will fire again. But if I let the machine set awhile (cool off?), then this setting will be too high. I’ve lowered the chiller temp in an effort to fix this problem, but to no avail.

Do you think it is a tube issue, or power supply?

It doesn’t matter when I’m using higher power settings for faster engraving or cutting, but for more delicate engraving it really is a problem.

Anyway, I’m getting a much better machine (Thunder Laser) pretty soon that I expect/hope will not have this problem.

Thanks if you can offer any insight.

My initial thought was the laser cooling water was warming up which would affect the cutting ability of the tube but you mentioned you are using a chiller and adjusting it didn’t help. I assume you’ve got your chiller set to fixed temperature vs the default and have the temperature set to remain between 16°C and 19°C.

Yes, I have my chiller set to maintain 16C, but I glance over and sometimes its up to 18C, though I have the variance set to .5 degrees, so not a lot of confidence in the chiller. It’s not an S&A, it’s a clone.

Still odd to me. I had cut ten 18" x 20" 1/8" birch ply boards through the day that comprise an 11 layer stacked topographic map and it didn’t do this until the last board at the end of the day. So not necessarily convinced it’s water temp. 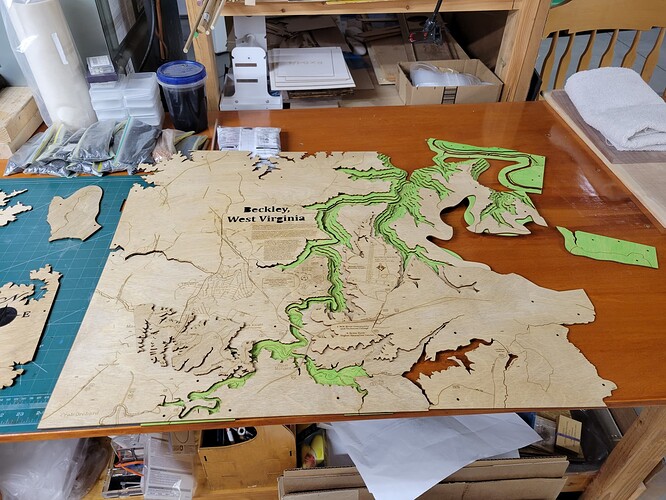 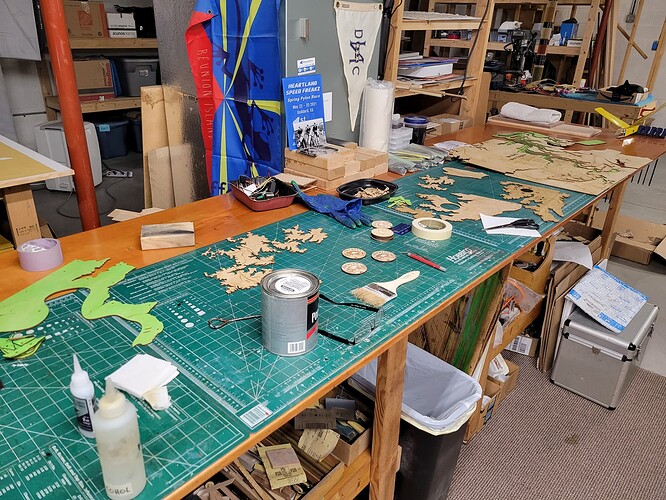 This could be related to the laser PSU, but the easiest way to test that would be to swap in a spare.

The initial voltage from a laser PSU used to start the laser is many thousands of volts higher than the volts relative to maintain the laser.

There may be an issue with the PSU where this strike voltage is falling off after warming up.

The same fading output could be possible for the running voltage as well.

Thanks for the tip Jeff.

Yea, a little over my head, but for some reason I was thinking (hoping) it is the laser PSU. I guess a simple check - as you said swap out for a new one. I wonder how strong the assumption that a new PSU of same brand will not be faulty if the original is. ???

Or, I did a little, I mean LITTLE research. The one in my machine is simply labeled “HY-100W.” I found another 100W power supply unit on Cloudray: 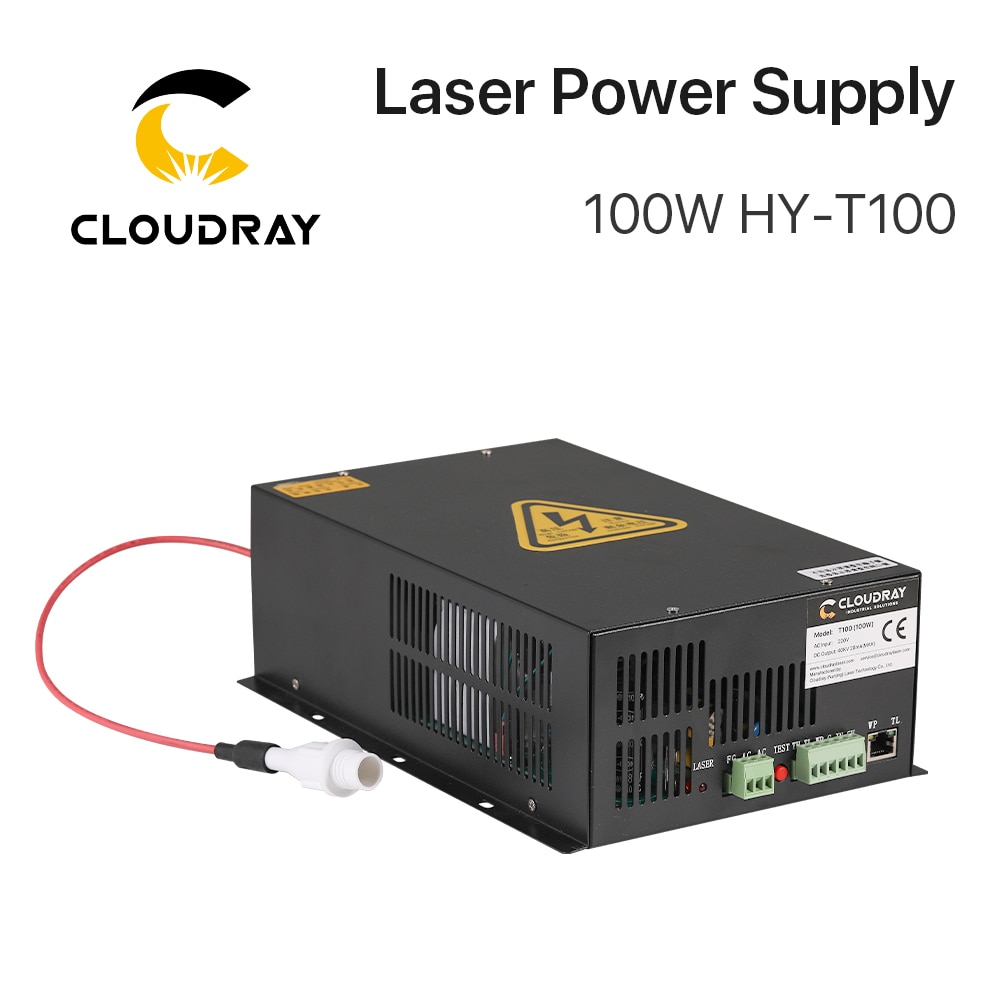 What do you think? Looks like a quick, simple swap. (Famous last words.) 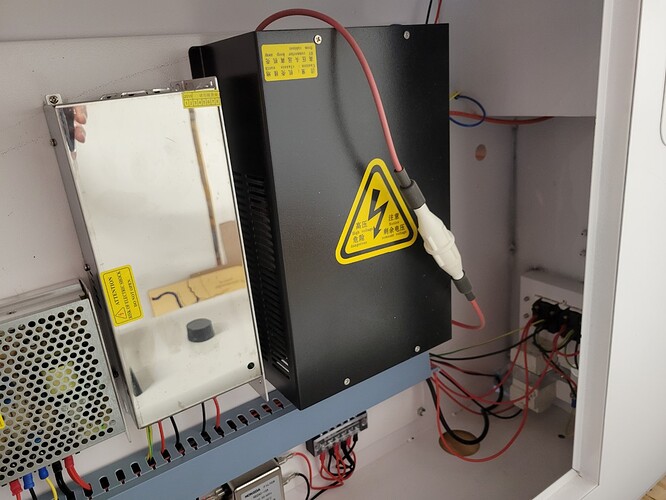 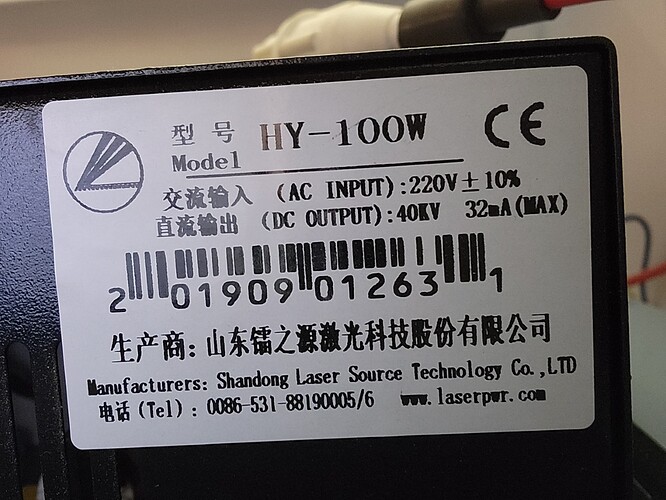 Have you considered just increasing your speed so that your min power is at 10% or higher? As far as I know, there isn’t a temperature compensation adjustment in any of the machines.

I believe that, when doing tiny details such as 2mm text, the speed has little effect. So the difference between 20mm/second and 100mm/second doesn’t matter with such small moves of the head. Also, with my machine, if I keep the speed down for these small moves the circles and such come out smoother, better precision.

My new machine that will be arriving in a couple months (Thunder Laser Nova 51) has hybrid servo motors that I expect will yield the precision needed for small details, so then I am hoping I will be able to increase the speed. It is a 100W machine, so I know there is a possibility the tube will not fire until around 10%, but I’m hoping the precision of the servo motors will allow a speed increase without sacrificing precision.

Have you adjusted the trim pot so that 100 percent power matches current draw for safe tube operation? I noticed after adjust mine that the minimum power necessary to trigger engraving changed.

If you don’t mind please let me know how the Thunder laser works out. I’ve got a same Hi Yeah (?) 100W laser and it’s fine but I’m rather feed up with poor quality rails mine came with and the horrible x axis configuration. Briefly looked at higher quality units recently and then got side tracked. Ultimately want a unit that is solid and well built.

As I wrote before, I’m wary of increasing speed for tiny detail work such as 2mm font and such for fear of loosing precision. However, I went back and did some more testing. It’s difficult to see in the pics, but the one on the bottom, right worked pretty well. I had to turn the minimum power way down and the maximum pretty high to get a consistent engrave at 150mm/second speed. It looks pretty good. I’m getting ready to do another big job and I’ll see how it goes with the new setting of higher power and faster speed. 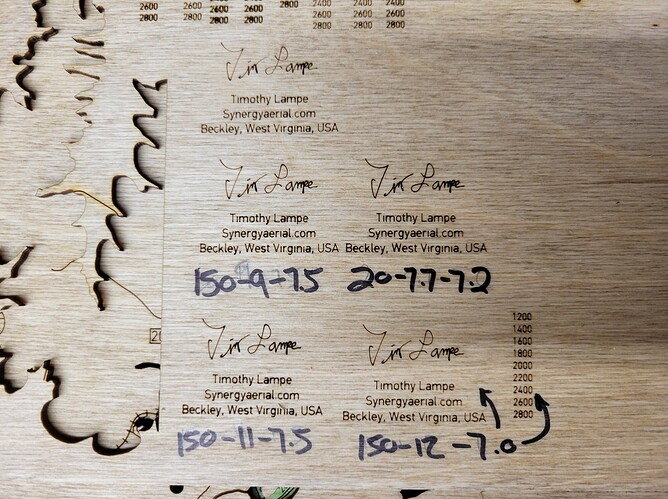 I haven’t tampered with the pot. I have no need to use power any higher than 60% and even that’s rare.

I’m mostly quite pleased with my HL machine. The problems I have like this are few and probably not noticed by most users who may not do finer detail work or may not be as picky. But I am expecting this kind of stuff to not be a problem when I get my Thunder up and running. Here are examples of the work I am doing with it now: 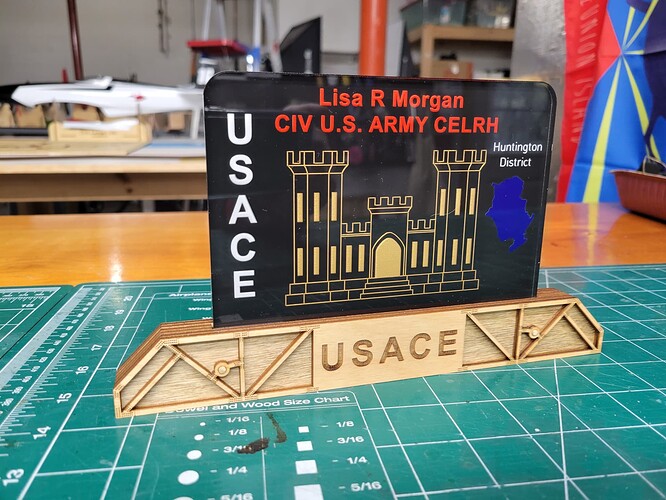 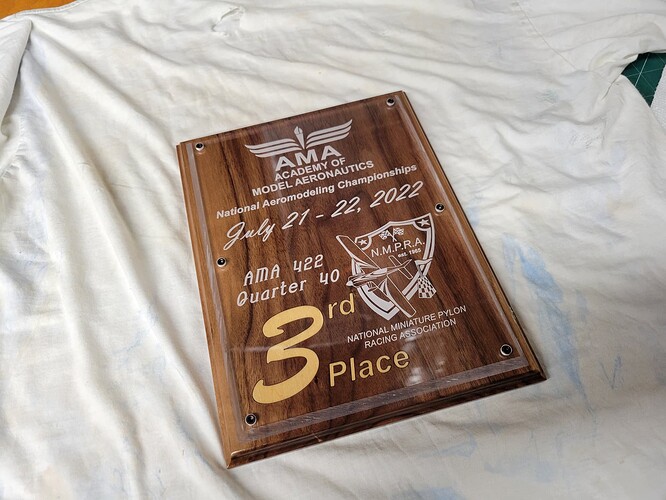 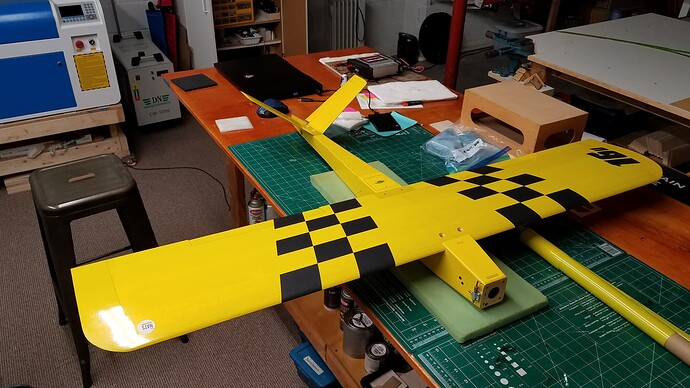 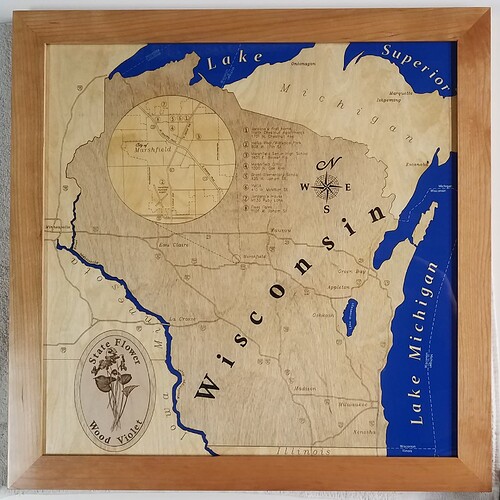 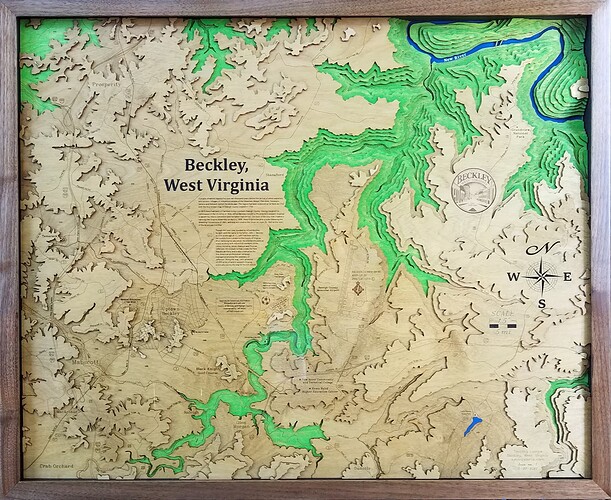 Wow! Work is amazing!! Thanks for sharing. Inspirational.

As an aside. Please don’t get me wrong, I love my HL-XM1060 laser. I probably should call it the Millennium Falcon though as it’s a love/hate relationship

. I guess with all tools, it is more about the person using the tool though and the saying that a poor craftsman blames his tools…

That said, my version came with rails that are impossible to tram/make true. So I effectively lose 25% of the bed area as the one corner is always off. It’s good for what it is. I’m just itching for something more refined that ummm works with me instead of what at times feels like against me.

Here’s one of my latest projects , or as my wife loving calls it, “tool inception” – The making of tools for your existing tools. This one was inspired from one of Russ Sadler’s videos. 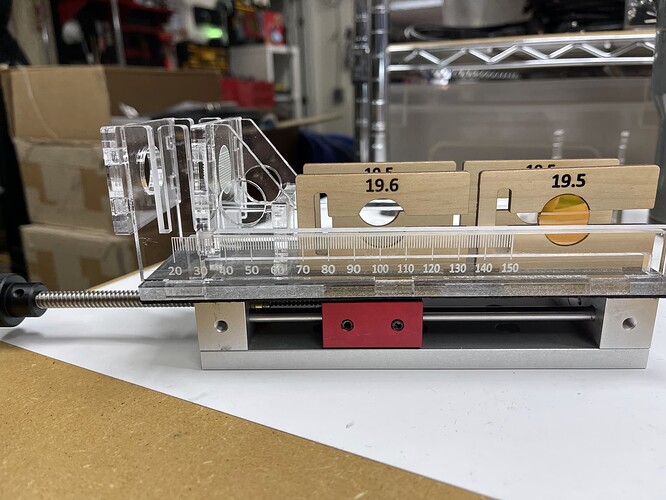 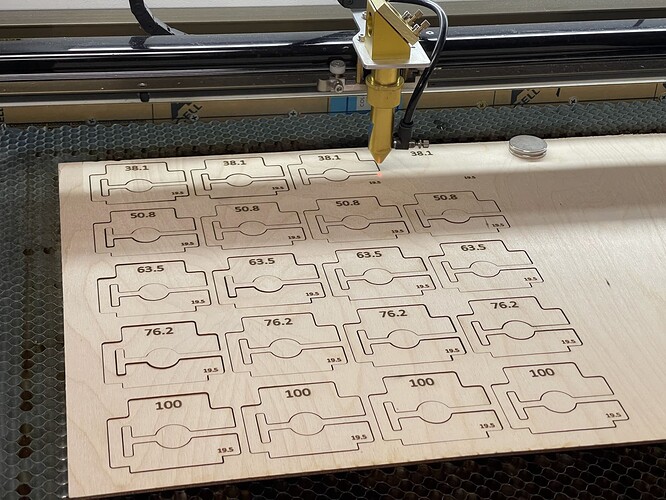 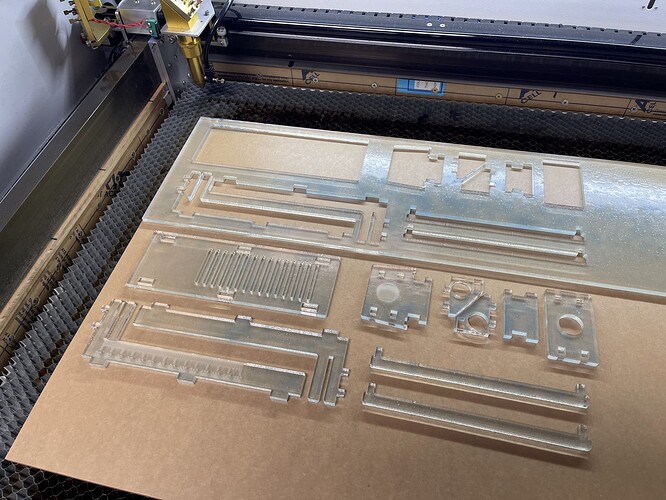 You may be butting your head against physics.

If you are running an ‘image’ or scan type of operation, you head has time to reach 150mm/s, because it has a place to slow down, change directions and accelerate back up to speed. This is overscan.

However if you are using vector image, it has to keep running and take the corners with the laser on. Which means it has no where to accelerate/decelerate to get to speed.

I highly doubt that you ever reached 150mm/s on your 2mm text.

Probably dealing with mostly the minimum power setting. I believe that is set by ‘Start Speed’ in the device manager.

I believe you are exactly correct. Yea, minute text laser never really gets any speed going.

Thanks for your comments.