Having issues with my custom built laser's steppers

Hello, and thanks for help, I’ve been fighting with this problem for a month now and I’ll give up if don’t get solution on this forum…

I have built my laser half a year ago and it worked nice and got even better with the Lightburn, but I’ve noticed this strange noise when it’s moving. It was ok, cut shapes were OK, but recently the lines become non-linear and circles become not round. I felt like it getting worse by time, so I’ve decided, that it is my position system issue, so I had my main rail replaced, it won’t help. I’ve replaced rollers and tried to switch belt – no change. I’ve tried to use another stepper motor – no change. But today this problem become critical – when moving from object to object the cutting head just don’t reaching it properly! It is cutting inside shapes of object one, then for second and when it is going to cut first object’s contour it just did not reaches the starting point… So I checked the firmware, checked GCODE, checked steppers tuning – when moving ultra slow the issue won’t show up.
Video I’ve recorded here: 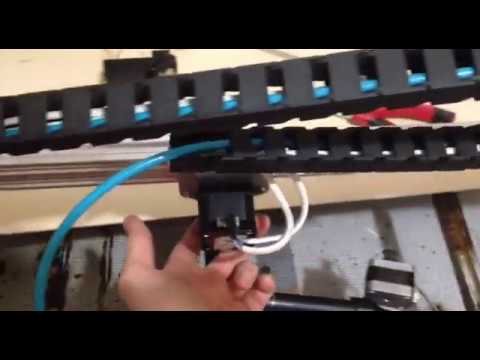 When I move the carriage without plugging to driver – it is going safe and sound, but when the driver is plugged it starts… Losing steps? Sticking? How could it be? Driver? But it is not even powered… Same is for Y axis, so switching drivers won’t help, I think… Have you ever faced this problem? I got critical budget so I can’t just order new power supply (Currently it is good 24V supply), new motors (Nema 17), new drivers (currently it is THB7128), new wires and controller to find out. I could buy new driver, but can the issue be here or I should try new motor instead (I tried to set my 3d printer’s motor here, but it has other issue – pressed belt bearing, so it skipped during miss in belt alignment)? Or I’am missing something obvious?
Medvezhonok (Misha) June 1, 2020, 9:05pm #2