How does the focus test work?

I saw a reference to a new feature in LB and also located it in the menu system. The online docs have not yet been updated to include the focus test option and a determined search of the system doesn’t say much either.

What might one expect if one selected the focus test? Would the laser immediately begin to fire out a pattern of a certain size? What preparation should be made for selecting this task?

It’s pretty straightforward. You need a controlled Z for it to work - the software produces multiple lines with varying Z height, labeled. You specify a start and end height, speed, and power, and it will let you preview or frame as well as run the job. 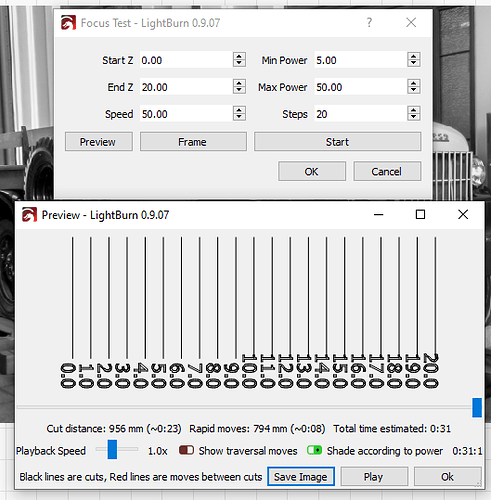 Well, shucks. No controlled zed on my machine. I kinda hoped there would be a programmed pause/resume option to allow for the equivalent. That leaves as the only practical option Russ’ cheese wedge focus tester, I think.

So, can somebody give a step-by-step on how to get the most effectiveness for the focus test, and also tell me if there’s something I did wrong that is causing it to move the z about 100 times more than necessary?

The Z moves the way it does because I don’t optimize Z moves yet for DSP systems (the feature is still in test for GCode systems, and DSPs are next).

The test itself is simple - it draws a bunch of lines at varying Z heights so you can tell where the optimal focus point is (the thinnest line).

For the range, I suggest using your normal focus method as a starting point, then using the “Get Positions” button on the Move window to figure out the Z height that gives you, then make a focus test of Z-5 to Z+5 or Z-10 to Z+10 (for example) to figure out if your existing focus height is ideal or not.

Do all values need to be entered using metric units even though I am using imperial for everything else?

At the moment, yes. I work in metric, so when writing new features I often forget to add all the unit conversion stuff necessary to handle both. I’ll make a note to circle back and fix that.

Focus test has been updated to support inch measures as well. This will be in the next release.