How nice to have Lightburn working with my Fettled SO3

I recently got my standard sized Shapeoko SO3 sorted for true squareness and belt tension. I have run a few small CNC projects and have been really pleased with the results. I had started to use Lightburn with a different CNC system (which I no longer have) and it showed a lot of promise. I used Lightburn and my new SO3 to create a small pine scrap wood project for a friend’s 11 year old daughter.

She has started entering Target Sprint air rifle competitions this year, though many have been cancelled. The air rifle is single shot and .177 calibre as well as being regulated and restricted to under 6 foot lbs of energy. The competition consists of 3 rounds of each competitor running 400 metres then shooting from a standing position at a 5 target biathlon target from 10 metres.

Each competitor has to have their own rifle stand on the firing line. The rifle is removed and replaced before and after each series of 5 shots, which are taken from a standing position only. I had found some scrap pine and after sanding it with many different grades ending with 3000 grit silicone carbide abrasive paper, I used Lightburn to burn the girl’s name and a rose of York (English White Rose) in addition to an outline of her Air Arms MPR 400 rifle.

This small plaque will be screwed to her rifle stand. After sanding it was covered with a coat of liquid beeswax in antique pine colour. The ease with which Lightburn controlled the burning process was delightful. The name and the rose were .svg files and the rifle was an .svg file but many of its drawn paths were left open. I figured that turning the rifle image into a raster image and used it as a .png file, was the easiest solution to hundreds of different open paths. 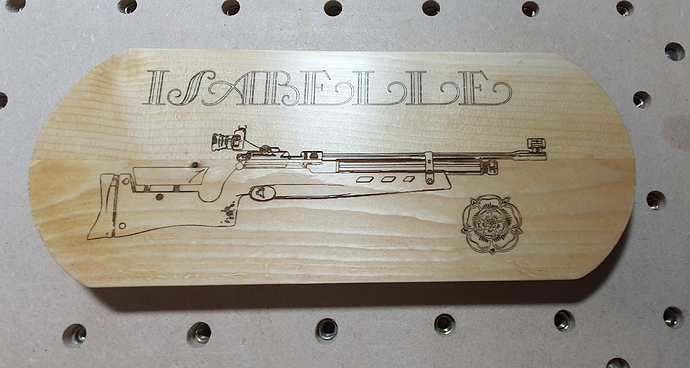 A happy Christmas and a much better new year than 2020 has proven to be to all forum members. Thank you Lightburn developers for a fantastic piece of software.