And a link to the bamboo you are using…

I bought the cutting boards at bed bath and beyond. Set of three for $20. They vary in size. As soon as I get home I will attempt to add a photo. 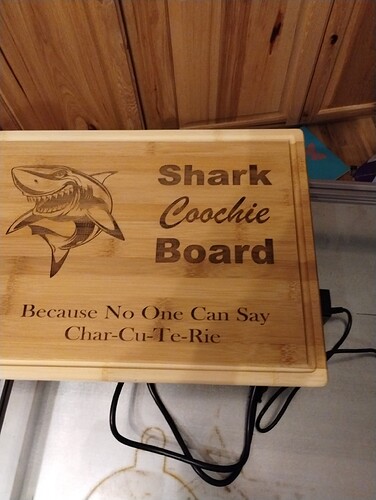 I have no problem burning black on bamboo. I gave it some thought and you might try this. I’m using
ortur 15 w. with Opt. output power of 4.5 w. max. I do my burning at 90%, (which is 4.05w. power) and I’m running 1000 mm/m. So, lets forget mm/s and % of power and your 80 w. power rating. Instead go by your true opt power output. If your true opt. output is, lets say 30w. power, 90% of 30 = 27w. Now figure what percent of your 30w = 4.05w. and convert your mm/s to mm/m. If your laser will will go that low and slow, you got it made. Turn your power all the way down and start with slow speed travel. Keep increasing your speed a little at a time. Somewhere in there will be your sweet spot.
Here are a few of mine. My 3D pics came out almost BLACK!!! Tricks I’m doing is:
After burning I’m blowing off my burns about with 20 lbs. air hose pressure (Do not brush off at all). Then I’m putting on 2 coats of " MINWAX Polyurethane Clear Gloss " clear coat in spray can. My bamboo looks real shiny, it darkens the grass, (bamboo) a bit and it also darkens the burn. Here is what I have been the last few days. 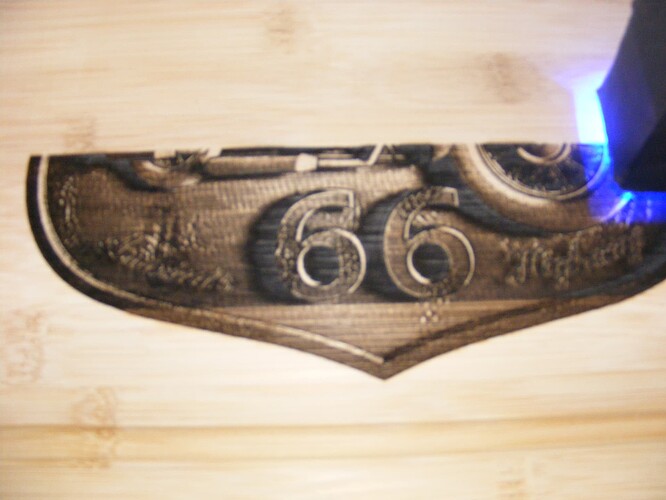 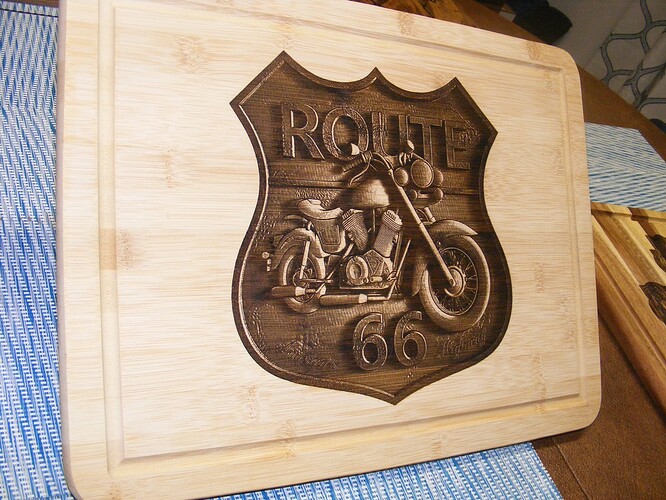 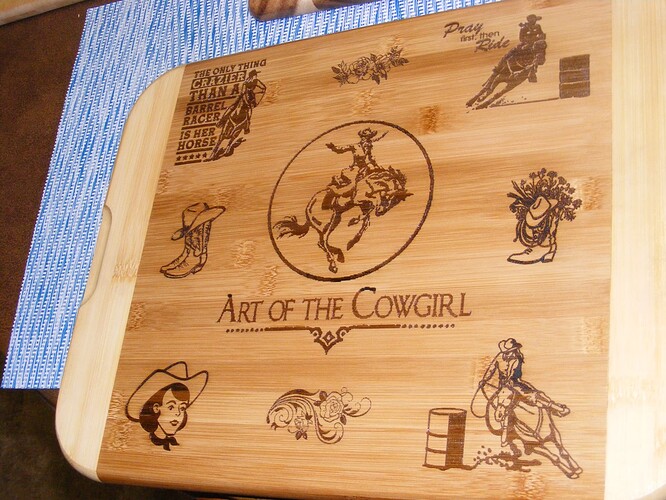 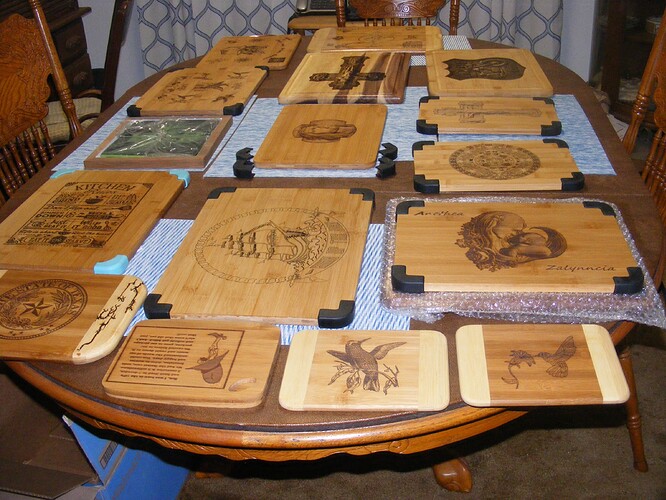 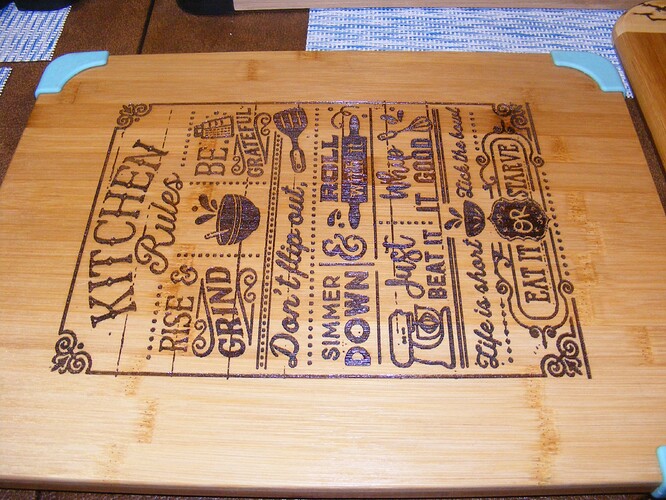 I bought the cutting boards at bed bath and beyond.

Thanks for the info on what/where purchased. Finding that kind of simple information with todays technology is sometimes a headache.

Unlike an led, co2 are measured as output power, not input power, like most other ‘things’…

His tubes output is likely near that output. You cannot ‘reduce’ the lasers output by turning down the ‘power’ percentage. The percent power is only an imaginary power control and is not the true story. I mentioned his machine being too ‘hot’… when his machine fires, it fires at 100% power, just like your led laser. He cannot lase at anything other than 100% power, nor can you.

No sense - are you saying that a co2 s power cannot be turned down at all? If you burn some thing at 10% and it looks good, then you burn it at 100% and chop it all to scrap. Is that not turning the power up and down? So if his power cannot be turned down then it seems to me that he needs to make his speed somewhere in the super sonic speed range ??? How do you frame something in without burning a line around it? Yes, I’m lost.
RC

It does now !! So, could percent be a value of time? Meaning, ( I think) if one firing or blast of the laser takes X amount of time to fire, then would 19% power mean that you are firing the laser for only 19% of the total time it takes to fire the laser at 100%? Have any of you big laser gentlemen made any sort of burn test with both diode and gas to compare? Two blocks of wood setting side by side, one test done with a, (say) 10W opt output diode with speed and power burns and the same with a gas/ fiber laser. Now I can look at the diode burn and say, this 500mm/m - 100% power looks about the same as this gas set at 19% power and 3500 mm/s speed. – Remember, it will be another 10 years before I graduate laser 101 !!
Randy

percent be a value of time

That value is the generated pwm. At 10% power, your hardware will generate a 10% pwm signal… This is the basis of whole percentage power thing… Has no need to know the end lasers power.

That time is usually referred to as the ‘period’. My Ruida comes set for a period of 50uS which in 1S/.00005uS relates to 20kHz or what many refer to as the pwm ‘base’ frequency.

I change only the speed to 1000mm/s and it is a broken line, but the color of the ‘burn’ is almost indistinguishable to that at 500mm/s.

I get a broken line, because I’m moving 1mm/mS and the period at 1mS, one cycle of the pwm across 1mm of material… you can see the actual on/off of the pwm…

For some this is an epiphany, … unfortunately it eludes many. Possibly because we are brought up that this isn’t true.

Now you can see why I think it’s best practice that you set the maximum current at the lps. Tubes will draw whatever the lps will allow.

Mine had a factory stated maximum current of 21mA. I measured the current on the mA meter with 50% power. It gave me 14mA. Since I know the driving current is only ‘there’ half the time, I’m only reading half the current. When it lases, it is drawing 28mA.

I’ve found it’s not exact, probably because of the strange resistance device it is, but plenty close for what I do and seems to hold. I do most of these setups and changes at 50% power. No need to run 99% for long periods for no good reason.

No matter what type of machining you do, it’s “speeds & feeds” that make for the best performance of any operation. The speed is tool or spindle, but it’s power on a laser. Feed is how fast you move the ‘tool’ across the material.

And who said you could not teach an old dog new tricks! I learned.
Running your rig at the power you do, about how long (hrs.) should your tube last and what is your replacement cost. – I’m debating on which laser I want to get that my wife said she would buy me. What I’m still considering is,

It’s less then 2 year old, but it hasn’t failed, knock on wood…

Depending on whom you purchase, some of these tubes are as low as $150, from ebay and Amazon at $260.

Both devices are consumables, what I hear, is a few years on the tube and less from a diode… I’ve never lost either…

With a tube, you have to get the heat away from the tube, using a coolant, you would need a chiller of some kind to keep the animal cool. The 5000 series chillers are actually refrigerated while the 3000 are a fan/radiator and probably work well in cooler temperatures.