Hi there, been using LB to create continuous engravings on cylindrical objects, and getting inconsistent results. Have all 3 styles of rotary, and all of them have the same issue so pretty sure it’s not mechanical. If I set my circumference at 190mm and my artwork at 190mm when I do a simple line box test it lines up perfectly. When I engrave, on some jobs its perfect on others it is plus or minus up to 4mm. Adding or removing length to the job makes it worse. As a test I ran the same Illustrator file from RD and it lined up exactly. Without changing any settings on the rotary, I ran it again from LB and it’s 1mm short. Changing the DPI makes the length change too in LB. It seems to be some kind of rounding error? It’s V 0.9.07 on OSX.

It’s possible this is fixed. You said “DPI” - are you working with images or vectors?

If it’s images, I’ll PM you a link to a current beta release with a bunch of changes to the math for image engraving.

Apologies, I was referring to DPI when outputting a fill. Line’s seem to be OK, just fills that do it.

So, if you do something like this (blue is Line, black is Fill): 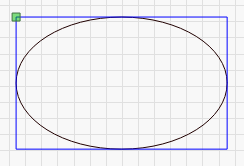 You’re saying they come out differently? Only on the rotary, or in regular engraving too?

I’m asking for specifics here because the math for images is quite a bit different than for vectors, but lines and fills are very similar. Fills have a “lines per inch” value, but only images have DPI - I just want to make sure we’re talking about the same thing.

Never had an issue with fills before, only on the rotary. Thought it was the roller rotary I had, swapped it for another, same result, then a chuck rotary. When I run a 190mm tall square in line mode, it comes out at 190mm. In fill mode, with vector drawings from Illustrator I will get a short or long image. The same file output from RD at the same size and rotary settings unchanged is the correct size. If I try to correct the length, for example if its 1mm short, I output at 191mm and it gets worse.

for example if its 1mm short, I output at 191mm and it gets worse.

Does it get shorter, or longer? (“worse” isn’t specific enough, sorry)

Does this only happen with stuff imported from Illustrator? Are you setting the size in Illustrator or in LightBurn? I don’t have a rotary up and running at the moment, so I’ll have to put one together on a test bench to play with this. Someone else mentioned an issue with perfect wraps as well, so this is logged as a bug to look into, I’m just trying to get a bit more info.

Setting the size in Illustrator or LB, same issue. If it’s 1mm short, and I make the image 1mm longer it becomes 2mm short or 1mm long. I have run the same file at fractions of mm changes to try and fix it but if it’s wrong it will stay wrong regardless of any changes in size. I went through around 40 failures (at 39 minutes engraving time each!) before I figured out it was an LB issue and switched to RD. I have also tried imaging 10mm wide strips as tests, and have had the 10mm work, and the full 190mm wide be the wrong size.

You say in your profile, “Ruida”, but not which model of controller. Can you tell me what you’re running? For some reason I figured you were using a gcode based controller. I’ve just finished setting up one of those, and the outcome is exactly as expected, so I’ll have to wire it up to a Ruida next.

It’s a Ruida RDC644XG. I’ve exported all the artwork I use from LB to AI files and run them from RDWorks and haven’t had one size issue yet (done about 30 so far) so it has to be a software issue not the hardware. Happy to test anything you want me to.

I asked because Thunder Laser uses a different controller firmware, and older Ruida models (like the 320) don’t support the rotary in hardware. Sounds like your issue could be a genuine bug, so I’ll get a roller set up and dig in.

Hi Oz, did you get anywhere with this?

I did some testing and everything I tested on my side came out exactly the size requested.

I asked you for specifics but you never replied to this:

So, if you do something like this (blue is Line, black is Fill): [image] You’re saying they come out differently? Only on the rotary, or in regular engraving too? I’m asking for specifics here because the math for images is quite a bit different than for vectors, but lines and fills are very similar. Fills have a “lines per inch” value, but only images have DPI - I just want to make sure we’re talking about the same thing.

You said “images” and then “fills” and then “lines” and I was trying to figure out which mode you were using, and if they were all wrong, or just one of them? The options are different depending on whether you’re doing vector fills or images too, and it could be a setting issue, but again, I need to know whether it’s an image, vector fill, or line that you’re sending.

There was also a fix released in 0.9.08, specific to images when rotated (which people normally do for the rotary), but again, you never specified - you said “when I engrave”, and said “changing the DPI makes the length change” so I’m hoping it was an image, and that it’s fixed now.