Since I updated my software a few days ago a few issues have really bugged me, and resulted in added time to my workload. Why were these changed??

1 - I always used to import my files, but now I have to open them, unless I am adding another file into an open file. This is annoying, but at least a box appears informing you that you have to open, not import.
2 - All files now open as ungrouped items. Beforehand I would open say 10 files, click on one and move it into position, click on another and move it etc etc. This was no problem as every file opened would be grouped. You only had to open files once. Now if you want to place 10 different files into one document to cut you have to open file 1, group it, move it, open file 2, group it move it etc etc. It takes much longer to set up a multi file document.
3 - Previously if I ever changed the speed and power of a colour in one file, whenever I opened another file the changes made beforehand would be shown. Now if I change the speed and power of a colour if I open another file it is at the old settings. I have to change every setting on every file that opens. I am only human so many mistakes have been made.
4 - When you used to open a file, and it was the wrong one, you could click the back button and it would remove the file. That no longer works…

There was a couple of others, but the elude me for now. I only updated for the ‘snap to’ feature, but wish I hadn’t now. Can you undo updates, or is there any chance of a fix?

Import options are in your settings: 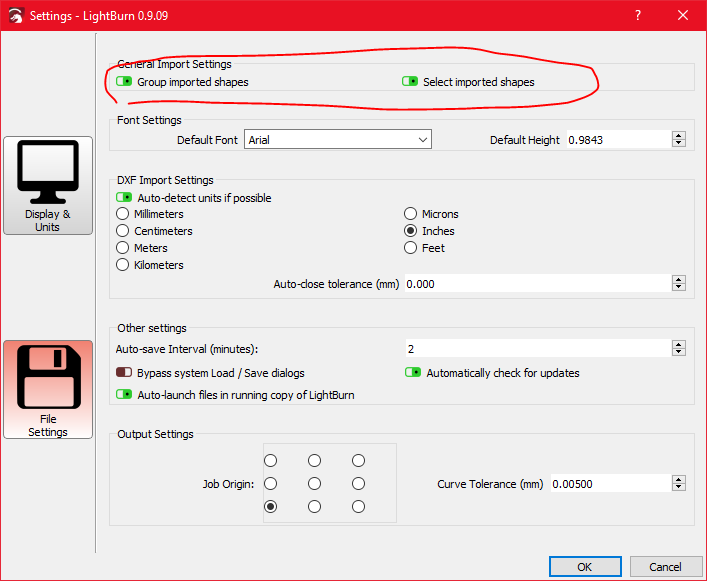 I’m not sure what your issue is with importing. I can import AI files and lbrn files just the same. I get this dialog box, but it still works when I click import. You just get shape data, not layer data.

You can revert to an older version if you’d like. There’s an archive somewhere…

How do I find older versions of LightBurn? FAQ

All previous versions of LightBurn are available in our version archive, here: https://drive.google.com/open?id=1j8Z0gfKS0ert7n0qnN05W5aimU6Fontm

There is a significant difference between opening a LightBurn project file and importing one:

It became apparent that quite a few users didn’t understand the distinction, and would Import their project files into a blank workspace, then wonder why all their settings were missing. This is the reason the warning was added.

Importing of other file formats, like AI, SVG, and DXF, has not changed.

Regarding your point #3, how changing your settings isn’t reflected in your old files, that’s the exact opposite of how most people expect the system to work - If I save a file with specific settings, I want those settings loaded with that file, forever. If you don’t care about the settings, just use the ‘Import’ instead of ‘Open’ and click the ‘Import’ button when it prompts you.

The 4th point - “when you used to open a file and it was the wrong one…” - you were using Import into your current project, and undoing the import. You can still do that, but you can’t undo ‘Open’, because it replaces the current project, wipes the undo stack, replaces the settings, etc. All of this is the way it’s supposed to work.