The laser was burning fine until about a week ago. The problem started out of nowhere. One burn was fine, the next wasn’t. I’ve tried resetting everything to default. Also have cleaned the laser, tracks, and tensioned the belts.

The initial line it burns is offset. Then it’s like every other line is offset. Also, images have jagged edges now, instead of defined edges.

Also, when I preview the burn, I draws fine. It’s just during the actual burns that there’s an issue.
The attached picture shows the offset. Look at the I and the K. 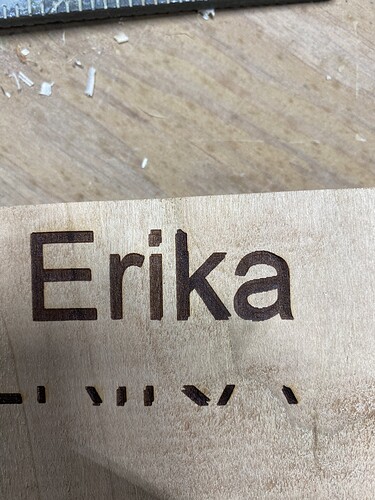 Try turning off crosshatch in your fill parameters and see what happens. It looks like you have multiple passes enabled - is that right? Not that crosshatch is, in itself, a problem, but reducing your axis moves may help to highlight where the problem is coming from.

Also, jaggies on such lightweight-framed machines are usually because your belts are too tight - you are getting artefacts from the belts climbing and dropping into the crenellations causing uneven motion.

Crosshatch is off. Single pass.

I’ll check the belts. Maybe I over tightened them.

Thanks for the response.

The picture you sent has crosshatch on and multiple passes, no? If not, I’m at a loss how the dot on the i managed to be crosshatched, both on the original and offset.

The fill is complete on both, not mechanical slip/slop, which would result in only partial fill on both artefacts. (does that make sense?) 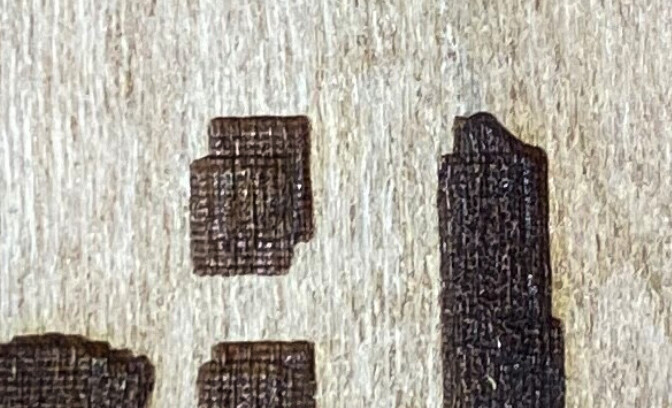 Belts should be one-finger push tight, no more. It’s not a friction belt - it only needs to be tight enough that the teeth don’t ride up the crenellations in the pinion. It should not ‘boing’ when you flick it, it should be dead and absorb any flick, but not floppy.

Nope. No crosshatch. I think that’s the grain in the wood causing the effect you’re seeing.

If you look at the partial burn below the full name, you can see where it looks like it’s doubling and superimposing burns.