Laser not consistent when skipping tabs

I am running the latest version of LB, on windows 11 and using an xTool D1 5W.
I am having issues when the head reaches the tab/bridge position as inconsistently changes the size of the tab, which I have set to 0.7mm to tabs that go from 0.7 to 13-14 mm long.
Please, take a look at the picture from the bottom of the job for clarification of my issue. 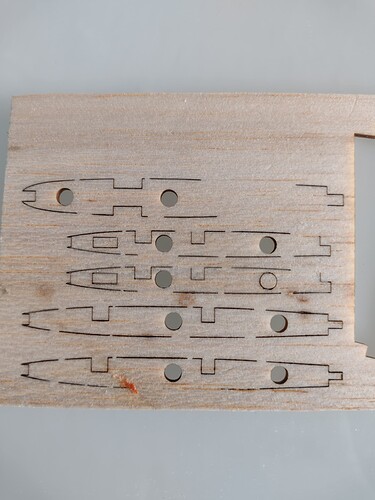 Just to be clear - the photo is of the underside of the engraving?

Are you almost completely cutting through the material at your current speed and power levels? Are the Tabs the correct width on the top surface?

Do you have air assist? Have you tried a two-pass or three-pass operation?

Thank you for your response John. Answering your questions: Yes the picture is from the underside. At the set speed and power, I have full cut. Material is Balsa 3/32 in. The tabs show the correct width. I am attaching two screen shots with cut setting and tab setting. I have been doing some other cuts and all of them came right. At this point I think I did something wrong when I started that job. In a later test, I found that if I set the tabs too big, I will have the same results. I think at this point it would be wise to put this issue in the fridge and take it back if it happens again. 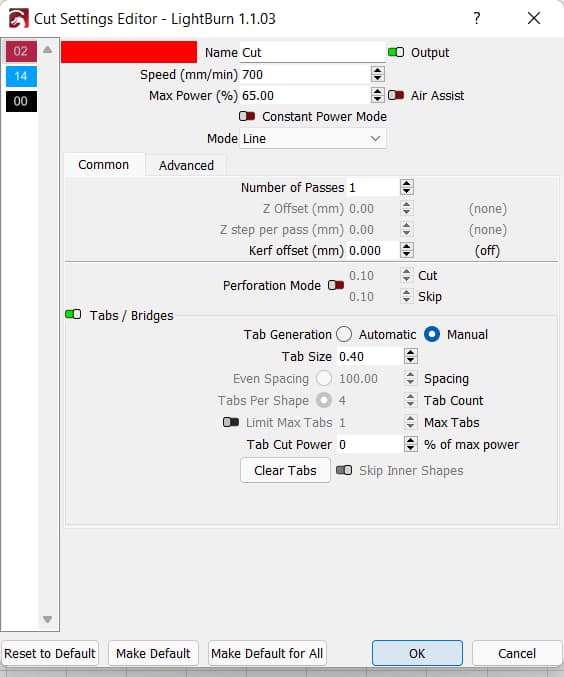 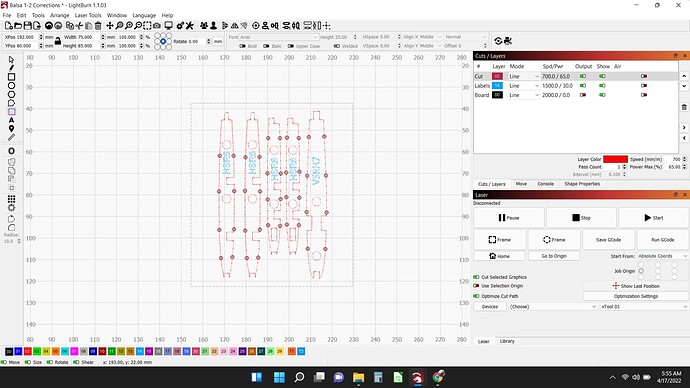 I have been doing some other cuts and all of them came right.

Are the other cuts in identical material?

The phenomenon you are seeing could be unique to that piece of wood as you are experiencing the variability in tab length in the direction of the wood grain. Slowing the engrave speed may help reduce the variability. If the tabs shrink to normal we’ve found the culprit.

At this point I think I did something wrong when I started that job. In a later test, I found that if I set the tabs too big, I will have the same results. I think at this point it would be wise to put this issue in the fridge and take it back if it happens again.

I think there are lots of variables remaining before it’s time to take it back.

You have a point on the material. Actually, I used a different material. I will try the changes in speed and power. However, as I mentioned in my first message, on those “extended tabs” the head moved faster than the cutting speed, which makes me think the issue was an error on my side at the time of the cutting, that I may have corrected later. Anyways, at this time I do not have more cuts to do in balsa, although sure enough, I will have more in about one week, and we will see what we get. Thank you for your suggestion, as the speed-power is a good idea when dealing with this type of wood.

There is a firmware glitch in some implementations that Oz found about a month ago. I’ll have to go find thread, but it was definitely about the tabs and it may have been xTool. The glitch was that the Traverse Speed (max speed) was being applied to the engrave speed.

Really a good lead. I understand the issue is in the xTool FW right? I will check that out. However, if I have that glitch it should be independent of the type of material, isn’t it?

Not good news on this one.I dropped speed and power by 20% and still the unit runs funny. Hare are the pictures front and back of the job at the edge of the board. Tomorrow I will have some more cuts to do. However, and to confirm this is related to the cutting speed, before the next cuts, I will use the same speed I used on cutting ply, and adjust the power to avoid burning the balsa, and see what happens. I may also try to use laserbox with the current speed and power settings to compare results 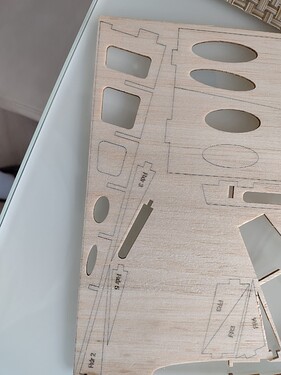 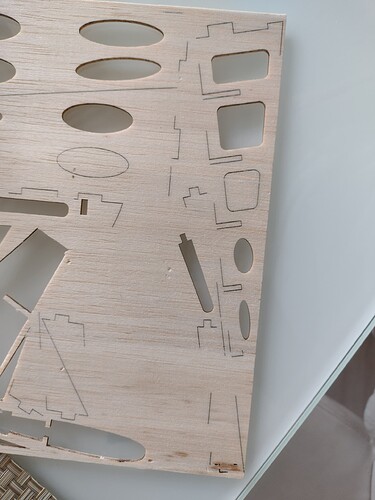 The problem is definitely related to the cut speed. I was not able to use the laserbox, because I don’t understand how that works, and I cannot get distracted in figuring that out at this time. However, I did a number of tests plying with speed and power until I got a combination (not necessarily the best) that produced the cut and did not get crazy when jumping the tabs. I am sure I can increase the speed and even at 0 power I will see when the tabs start messing things up. I’ll do that when I have some extra time to play with the unit. Anyways, as mentioned before, this is an issue with xTool code that they should fix. BTW, I verified I have the latest FW and SW installed from them.

I checked the fw and sw revs, and laserbox says they are up to date. I also did a test run introducing tabs and running the same project at different speeds. I found that above 350 mm/min the xtool gets nuts and after the second tab starts moving at light speed until the next change of direction. I was looking into the lbox sw, and found no way to set up tabs, what makes me think that their design does not include cutting other than slow the head and increase the power. Anyways, I will report to their support. Do you think I should open a new thread so that anyone with this kind of problem can know about the max speed for tabs limitation?

Hopefully we can generate a sufficient number of examples to motivate xTool to provide an update for this.

FYI, I contacted xTool support reporting the problem, and their answer was “Our group would establish the new software in the next few months, wish you could wait for it.”.
Kind regards

Well, they better work on that one otherwise their more powerful lasers will be cutting speed will be limited to the 5W’s.