Light Burn vs. Program supplied by the maker

I generally use Light Burn to load the project, move it around etc., and the Send it to the cutter. Several times I have had problems with the order in which the supplied software decided what to cut first and last. Had a problem today. So instead I used Light Burn to run the cutter by using the Start button rather than the Send button. At least today the problem went away and the cut was fine.
My cutter has the Ruida RDworksV8 DSP contoller.

Should I be controlling the project from Light Burn or from the supplied Chinese software?

At this point there is very little need for using RDWorks on your Ruida. You should be able to run directly from LightBurn without the need for any other external software.

Do you think my problem was due to RDWorks software? When I tried with LB it worked fine.
Jay

I want to say yes, but I have no idea what the problem is. You identify you are having some, and it has to do with “what to cut first and last.”, but beyond that, no clue.

What is the exact issue you are trying to address? Optimizing the cut order?

Let me try and restate my inquiry. Is there an advantage in using LB to control the laser via the Start button?

For example I have a drawing with cuts inside of cuts. All were Red for cutting. It seemed not to have a particular preference (using the RDWorks) as to what cut was first. Generally I have noticed it cuts the “inside” cut first and then the “outside” cut. But sometimes it does the reversey and cuts the “outside” first.

So would LB provide more control over the order of cutting without me having to use different colors to keep things straight?

The best way for me to answer this is to share a video discussing the LightBurn Cut Planner. That way you can see for yourself the types of control you have in setting the order and direction of your cuts. After reviewing, fire back with your specific questions for a specific job and we can help with a suggested workflow. 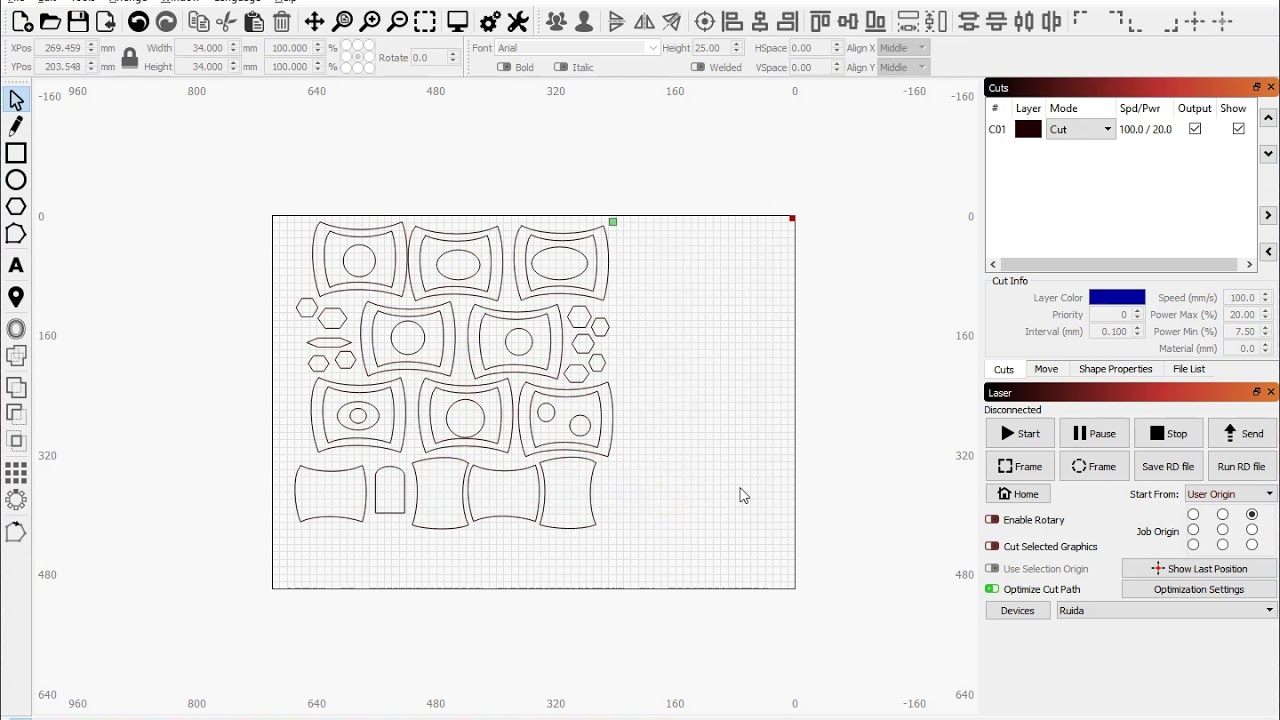 LightBurn is likely smarter about what is inside and what is outside - I’ve seen RDWorks get this wrong before.

There is a case where both programs will do poorly, and that is art that isn’t actually closed. If I draw four distinct lines, one at a time, that happen to touch at the ends, it might look like a square, but the software still sees it as four lines, not a closed shape, unless they are actually connected together into a continuous path. Both RDWorks and LightBurn will not properly sort things that are inside square defined by these four separate lines.

Does that make sense?

Rick and Oz
Thanks so much for the advice. The video explains just about everything I have had problems with.

I do have one hopefully final question.

Does LB tell RDWorks how to cut and in which order particularity if I use the various options mentioned in the video? In other words does it create the file and send it to RDWorks to be cut? If that is so then I guess it doesn’t make any different if I click Start or Send. Except that Send allows me time to walk over to the cutter. Of course I could install the camera i purchased and not have to walk over to the cutter, just press Start and watch the video on the screen.

LightBurn does not require RDWorks at all - you never have to install it, and they don’t communicate. The only way they can affect each other is in the settings in the controller itself, which they’ll both allow you to edit.

The difference between Start and Send is that Send asks for a name and sends the file to the machine memory with that name, allowing you to recall it later. Start just stores a temp file, and begins running the job as soon as there’s enough buffered in the controller. This is usually the preferred method, but if the job is complex, like a detailed photo, it’s a good idea to Send, then start it from the controller panel, so the controller isn’t devoting CPU resources to receiving the data while it’s running the job. For simple vector stuff this isn’t necessary.

I am going to stop you there. LightBurn does not talk to or know of RDWorks. They are both software that provides art editing tools, job setup controls and the ability to read from and send commands and files to the controller. They basically are doing the same thing, but we think we do it better!

You do not need to have both, but it can be handy to check each others work.