Well, I downloaded and installed lightburn Linux on Debian 10.10. The 9.24 version has worked for several months so I downloaded 1.0.1 the .run file. It opens a terminal window, deletes the old version and then waits for a key to exit the terminal. And it does the same thing every time it executes. Linux tell me the .run file may be an executable script.

Do you guys test on Linux?

Also, you are shipping a 16 MB debugger file with the Windows version. The lightburn.pdb seems to come along for the ride.

The .run file is an installer. Afterwards you need to load LightBurn from your application launcher as the installer has installed a application link.

The Windows pdb file is so that we have more context if there’s ever a crash.

A Linux update. First, in prior Linux versions of Lightburn, the executable was downloaded, this time it was a script with a .run extension. Don’t give us a file is is suppose to be an executable and isn’t. It’s OK to let us know its a shell script.
Next, the install script deletes the old version of Lightburn and replaces it with the script renamed to the prior executable. Don’t do that, some of us would prefer to simply know the program has been deleted, and have the script delete itself after the installation. Finally, this version creates a /.local folder in the users home folder. Once again provide a README.tx file advising. I doubt this will play well with apparmor.
Also let us know that we can no longer create a shortcut and must use the program as installed under the graphics menu. Finally, the system has to be rebooted or the first execution of the program may kill the desktop manager. The new version starts but there is no version number, and apparently no about box, so its tough to say what is running. There does seem to some new menu items.

Some professional advice for Linux software.

Most of us using Linux are not Windows users, we actively are involved in some way with the Linux community. About boxes have been around for almost 40 years and are a standard way to determine what version is running quickly. Put an about box in that takes clicks, Help → About, and get over it. Do try to change history, make it easy. Next, consider using the apt package manager to install your software. Normally, the executable would be installed in /usr/bin which is customary for applications installed on all versions of Linux in the past 20 years. There are stand folders for storing logs, executables, and configurations. i suggest you familiarize your staff with customary Linux development staff with customary Linux paths and procedures, it will make installation and support a much easier task.
I run Debian 10, Debian 9 RT, Debian 11, Arch, Manjaro, Gentoo, and Mint. I have yet to see a program that I, or anyone else experienced in Linux development, install a program that doesn’t work on all of these platforms, out of the box.
It appears my problems, except for finding the version numbers, have been resolved.

The .run file is an installer and has been around for over 2 years. It’s actually the first thing I wrote for LightBurn. You can still, however, download the .7z archive and install it wherever you want. No extra directories will be created and you can create whatever application shortcuts you want. This is why we provide both.

There are details about both of the ways of running LightBurn on Linux in our documentation here: Installing Lightburn - LightBurn Software Documentation

Please also note that our key audience for Linux users is mostly people who are running lower-end machines that they are trying to get some extra life out of by installing Linux (instead of paying for a newer version of Windows which may not run well) and using them to control their laser.

Also, we test on Ubuntu 16+ and Fedora 28+ and that is officially what we support for Linux. Anything else is in “Your Mileage May Vary” territory as there are a host of variations between the distros and it would be very difficult to make it run perfectly on every possible Linux setup out there. Linux users represent less than 1.5% of LightBurn’s user base, so the Linux version is effectively a ‘best effort’.

About boxes have been around for almost 40 years and are a standard way to determine what version is running quickly. Put an about box in that takes clicks, Help → About, and get over it.

Are you talking about the “about” box that appears after clicking Help > Quick help and notes > About? 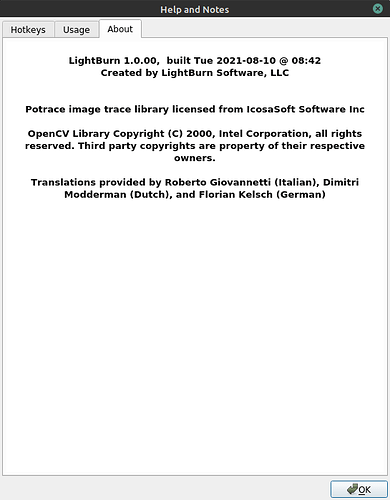 It’s there. Get over it.

I found it unusual to not have an About dialog under the Help menu but eventually found it and that was that. Not a big deal and if Windows users don’t complain about it then it REALLY isn’t a big deal.

Understood. Debian is the official GNU Linux that ALL other Linux distros must test against to use the Linux name. Fedora is a Redhat variant that is not GNU compliant and tagged as a vertical distribution. Ubuntu 16.04 is older, 21.04 is the current LTS version. Ubuntu 18.04 is compliant, 16.04 is not with Debian 11. If you test against the current Debian (11.01 as of this message) you will be compliant with current GNU distributions. If you test against the latest GNU distribution, your application will work on any GNU compliant distro. Almost every vertical distro (Redhat, SUSE, Fedora, Gentoo, Arch, and Ubuntu) provide instructions for installing Debian applications properly on their distros. The easiest way to comply is to build a .deb installer package that ALL GNU compliant distros can install with dpkg or apt. This eliminates the 7z archive vs. .run file issue and uses the native GUI shortcut launcher to make the shortcut with a single click from the menu. Your manual script does all but make the shortcut lancher aware. It shows up under xfce but when the desktop shortcut is created, it can’t find the app path. I have been developing hardware drivers for trsdos, msdos, Windows, NT through Windows 10, Server, and Linux, including embedded, for 46 years in addition to being a subject matter expert in Linux, Windows, Server, and Networking for the Computing Trade Industry. I write once for Linux and embedded Linux, including BSD variations and never have a problem going from one distro version to another. I still have applications developed for the 3.1 kernel (2011) working on the 5.1x kernels without any modifications, including com and USB port access. You just need to know what tools to build your installer with. You can also run the Windows version under Wine 5.0.3, the latest stable version which is reported as Windows Server 2012R2 to Linux. That assumes you can use a Windows license installed on Linux under Wine.

That’s because Debian is archaic. Its easy to have everything work when there are no modern developments in the code. Any Linux admin should be able to figure out how to install things without complaining, the point and click gui and have things work is for windows users. Its not that big of a deal to do some manual action in Linux. Its whiny posts like this that will divert the Lightburn team from releasing future Linux packages. I prefer to use Linux over Windows for things that cannot be interrupted since Windows loves to reboot and install updates on a whim even when forcing group policy not to. I’m an admin for Linux and Windows for a fortune 50 company. I will always prefer Linux over Windows for anything important.

Really,
Archaic! It is much easier to build an application that can run from any users home folder if you placed the libraries in the proper system folders. Linux does’t have the complexities of the Windows registry and a GUI application is no more difficult to run from the command line than a one button click. It’s not archaic to have consistent behavior on application execution across platforms, if you know what you’re doing. It makes it easier for the end user reduces platform specific. That isn’t “archaic”, its a smart idea from a business and development point-of-view. Anything less means you don’t care about customers.

I can assure you that I’m not “Archaic”, and my hardware is not an older system. I never stated that Debian was “state-of-the-art” or my preference. I simply said it that if you build a “deb” package, it will eliminate having different installation instructions that are distribution specific, since “dpkg” is available on all distributions for that very reason. It also make you compliant with the Linux that all compatibility is measured against, including embedded Linux. It’s not all about “Archaic”! it’s about making things consistent across different Linux distributions and functionally identical for the “user experience” across all platforms, wisely eliminating “platform specific” differences wherever possible.

Obviously, you have no interest in making the user experience better and less “platform specific” even across Linux distributions, much less between Linux and Windows. I think you have clarified the real problems. They are “personnel”, “human”, and “archaic” in nature.

You’re quite a piece of work!! I seriously doubt that the crew at lightburn wiil abandon Linux. But you don’t speak for all the lightburn users and if I met you face to face, I would do something your mother and father failed at. Teach you when to ne quiet and have respect for other people. I believe Oz and his staff have a vested interest in the topics I mentioned and how to accomplish those tasks. You should have the same interest in an improved product that can improve market share through higher quality.
And frankly, I think you are a complete idiot! You know nothing about software and I don’t care what you think, its an opinoin without merit or foundation.

With 1.5% share of licenses one has to ask, is this conversation providing positive reinforcement that it’s worth while to continue paying for development and support of the Linux version or not.

I personally really like Lightburn and I only use Linux systems and I also advocate for Lightburn no matter the platform or laser machine. Please consider the consequences of such adversarial posts.

There is a Requested Features section if you’d like some things changed.

LightBurn wants to know what you want. Do you have an idea for a new feature you want added to LightBurn? You can add and vote for additions to LightBurn by following the link below. (please search voting system first as to not duplicate requests) “Have a feature you’d love to see in LightBurn? Suggest it here. We actually read these things. Please be specific, and include the type of controller you have, if applicable.”

They have mentioned dropping it before as Linux is less than 1% of their user base. Sorry you have had to resort to insults. I said Debian was archaic, not you. Take it easy and enjoy the software.

We are happy to consider all perspectives when presented in a polite and constructive manner. We are not ok with anyone insulting other forum members or staff members, or acting in a generally aggressive manner. This behavior is unacceptable and will not be tolerated.

Thank you to all who have shared opinions here, this topic is now closed to further replies.