Looking for a joiner

The part is a bit more than 50 mm in diameter (the valleys of the teeth are close to 50 mm) and 3 mm plywood. The dog-bone shape (grey) is a second piece, while the red gear is split in two underneath the dog-bone.

The width of the torus is about 11 mm from tooth-valley to center circle, expanded from 4 mm in the original design, which would be far too small for anything.

I’ve been trying to come up with an approach to allow the dog-bone to hold the star-gear thingy together, but allow for easy separation multiple times, without regard for friction wear. I can tune my cut to provide for a great friction fit, but time and physics will eventually result in a loose fit, which is unacceptable.

The dog-bone is 16 mm wide at the fat part, which means a small work space for two junctions, although I think 3 mm each side is doable.

I’ve been thinking bamboo skewers, at 3 mm diameter, tuned for a snug fit, at least in the dog bone or in the star-gear, but can’t come up with an easy connect/disconnect configuration.

I’m not comfortable with more than three layers of plywood, one for the star-gear, one for the dog-bone and one form or another for the fastener. 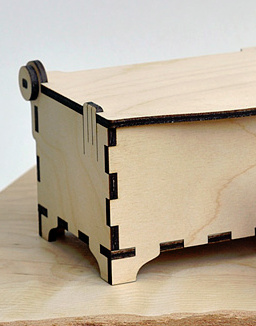 I’ve considered a rotate-to-lock type of fastener, with friction fit and wear issues, again, plus the lack of space to apply a part of respectable size.

I’d like to avoid anything 3D printed, even though I have a 3D printer and could spit out dozens of prototypes and dozens of finished fasteners. I’m also aiming away from metal fasteners such as screws and bolts and small daggers.

With such a small starting point, this specific item is going to be challenging. Later builds are going to be larger and easier overall.

FYI, this is some form of hand held loom. After looming all the strings, it is split apart, allowing the creation to be easily removed. The dog-bone could be two pieces, but the requester indicates she typically loses two-part connectors such as this.

It would be interesting to expand this to some form of iris panel, with the star-teeth extending for the weaving and retracting for the removal, but if I can’t create a simple, elegant fastener, I sure can’t build an external tooth iris, can I?

Multiple sprung fingers, through the dogbone into the gear, aligned with the direction of force.

You can make it flat both sides, but would need some cutaway to pull them out with pliers or something to allow you to grip them as they needed replacing. 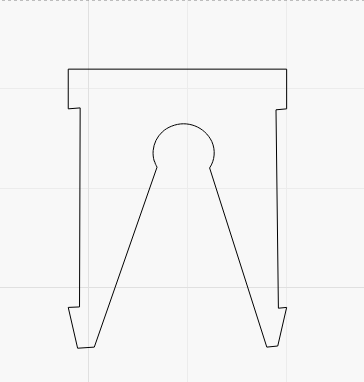 Thanks for the drawing.
I’ve been thinking too one-dimensional, using slots of minimal width, while your wide-angled slot has great merit. The fangs on the pointed ends would be rounded, making insertion and removal easier, I think.

Is there a technical reason for the asymmetry, or just a quick toss-together?

Just threw it together using node editing to show the concept. I could make it properly if you gave me the dimensions.

I haven’t yet figured out dimensions. It’s going to be a matter of slicing out a few iterations for strength testing and fit. Up until now, I didn’t have a shape.