I had a friend ask me to walk him through making a clock with his laser in Lightburn, so rather than spending hours on the phone, I made a YouTube video instead.

You WON’T get lost in this tutorial like other YT videos.
I don’t skip steps like most YT videos!
This is a step-by-step guide, start to finish.

Hope it helps the newbies here too… 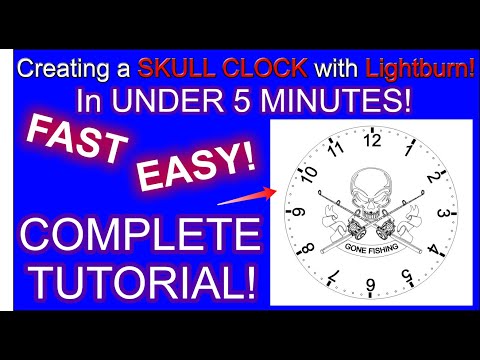 LOL! You couldn’t find a Trout vector? Or, I guess in this case, maybe a Sea Bass…

@TomWS I create all my own vectors and put them on ShutterStock. But yes, I do have a trout! The skull with the fishing poles symbolizes what my wife thinks when I go fishing. She says she’s getting old waiting for a Redfish dinner

Excellent video! I ended up watching the whole video. I was pleasantly surprised that despite some significant time using LightBurn I ended up learning a couple new tricks. It was also an excellent example of some of LightBurn’s excellent integrated features (creating multiple copies around a point, text on a line, etc.).

Nicely done - you have great pacing for beginners, and the explanations were very clear. Thanks for doing this!

@dizzyd Thanks Don, I try not to get too technical or use too many keyboard shortcuts since they’re supposed to be beginner friendly tutorials. But I do find myself stumbling sometimes trying to remember where the UI icons are

I think I’ll probably do some more videos since I already started the YouTube channel and website. I’m working on a drinking game for my son today at his request. A laser etched game on a cutting board - total cost $1.71. I’m sure some folks will want to see that one.

@LightBurn Wow, thanks for the compliment! Coming from the great Oz that means a lot. I’m still learning this video stuff though. Steep learning curve figuring out YouTube videos.

It gets easier. I cringe when I watch my early videos - loud mouse clicks (it was the software adding them), and I say “um” wayyy to much. The more recent videos are paced better, sound better, … but practice makes perfect, so I hear.

Yours is great - what do you use for the editing software if you don’t mind me asking? The zooming on specific UI parts was nice, and I could see myself using that.

@LightBurn I record in Active Presenter and I edit out most of my “ums” in Davinci Resolve :-

. Active Presenter is chock full of features and probably the best screen capture tool I’ve ever used. I used to use OBS Studio & Davinci Resolve for my private (company) ATM coding training videos, but I was preaching to the Choir in those; YouTube is a whole different audience.

Active Presenter is free software and has a very small learning curve. The graphical UI is self explanatory, unlike most other software. I use the program window capture, and then when it’s done, watch it and add the zoom on the timeline as I playback; it’s an overlay. The rest of the edits I do in Davinci Resolve, like adding graphics, adjusting the soundtrack, adding cuts and other videos and such. But I guess the entire editing process can be done in Active Presenter. I’m just used to using Davinci Resolve from work.

Thanks again for the compliments! Now retired, mine aren’t like the entertaining videos on YouTube. I’m not making them to score the million subscriber plaques, but more to try and help my fellow hobbyists.

I’m using Active Presenter myself (so it seems you’re preaching to the choir again) but I haven’t played with zooming. I’ll have to play with it more in all that free time I have.

@LightBurn I know the feeling, I’ve used it since V4, a long time now and just found it for the first time in V8. Real quick:
INSERT → ZOOM AND PAN
Adjust the handles for the size and move to the location zoom.
Hit play on the video, and then pause on where you want the zoom to stop.
Insert another zoom and pan, but size it to full screen this time.

What is your YouTube channel? Loved this video, very informative.