Been battling this issue for a few months now. When cutting my Ruida RDC6445G laser will intermittently mess up the cuts. I believe it is a data transfer issue, and so far have not been able to eliminate the issue. I am connected via USB cable directly to the control board (not to the hub on the outside of the laser).

My partner was cutting circles out of scrap today, cut several fine from the same drawing in lightburn, then added a small fish to the next cut as the scrap was large enough to fit it. After adding the fish and hitting start in lightburn we experienced the intermittent screw up again.

The first photos are of what we had in lightburn. She had been cutting this circle just fine for the last 30 minutes. Cut several without issue. 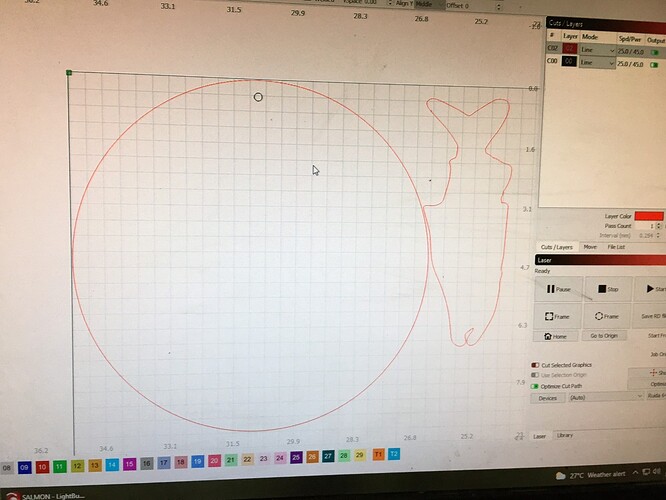 The second photo is the result of what we got. 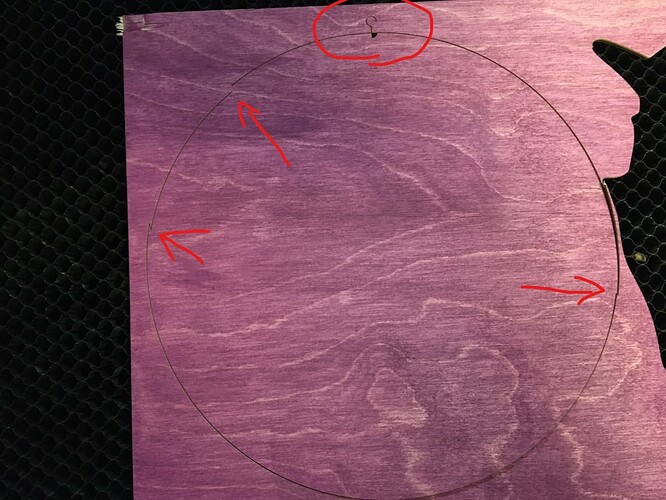 The third photo is what we are seeing at the Ruida controller screen. Notice the jaw of the fish is also messed up. 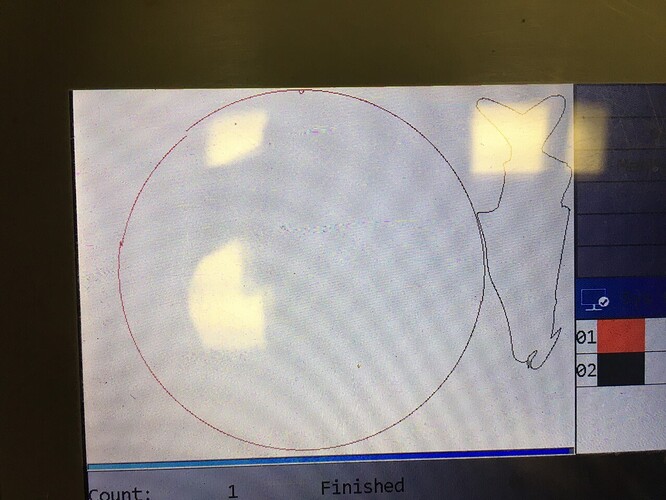 I do not believe it is a belt slip issue as it would not show up incorrectly on the Ruida Controllers screen. I feel as though data is getting lost between the computer and the laser. I have been having this issue regularly for the last 4 months and have kept trying different things like a new USB cable, connecting directly to the controller vs the outside of the laser. Have also had it happen on different computers, as we have a desktop and laptop we use.

Any advice would be amazing!

Im running windows 10 PRO, and lightburn version .9.20 - my laptop is a mac and running a newer or the newest version of lightburn. Will have to double check laptop specs.

If it’s on the Ruida lcd, then it’s being told to do that…? If we are looking at the same thing.

Curious if the results are the same both ways.

Yes, it is my understanding that if it is on the ruida LCD it was instructed to cut like that. The information that the ruida received is displayed on the LCD.

We use both, most of the time just “start”. From previous posts that I have made or others I have found “send” is useful when its a lot of data that is being sent. We had thought about this being a possibility because previously when its occured it had been medium sized files. This last particular file was very small. 1 circle and a fish outline.

Not sure what Hank was driving at, but if you click ‘send’ the project or file is sent to the laser. You can go to the control panel, press file and select the file you just sent to be run.

I have not used the ‘start’ in a situation where you have a layer selected and ‘start’ runs or re-runs that layer. How exactly start works relative to does it send it then run it or? Here’s the Laser Windows documentation, but they are not too clear on exactly what’s happening.

" Start: run the current file on the laser"

I doubt this is related to your problem.

My understanding on the start vs send is that when you use start, the machine can start moving/cutting etc before the entire file is transferred to the machine. With larger files there may not be enough memory for the controller to take all the data as well as send data to the stepper motors/laser on off etc. Sending the data eliminates the machine moving before the transfer is complete.

Again, this is just what I have read as I have been trying to do my own research before posting again. I dont feel like its the issue here due to the small file sizes I am using, as well as it not happening consistently. I have cut several much larger files then this particular one successfully in the past one after another after another without issue, just to swap to a simple circle and have a problem.

In general, the Ruida display should show the same as the Lightburn ‘preview’. Can you post the .lbrn2 file and let us examine it. I doubt this is lightburn. Maybe someone from Lightburn will give us the gory details of how ‘start’ and ‘send’ really work. Generally once the Ruida starts I don’t think Lightburn can stop it, indicating to me it ships the whole file there first or it could just stop transmitting to stop the job. But I don’t know.

I assume you have tried to ‘send’ the file again and look at the Ruida display for anomalies?

the only thing I have personally encountered so far that actually can mess with the Ruida output despite looking fine in LightBurn is the Backlash settings in the Ruida controller. Your misaligned cuts look something familiar to what I have encountered with messing with those Ruida settings - but the wired hook at the top doesn’t fit to this idea. Nonetheless, it is worth checking. 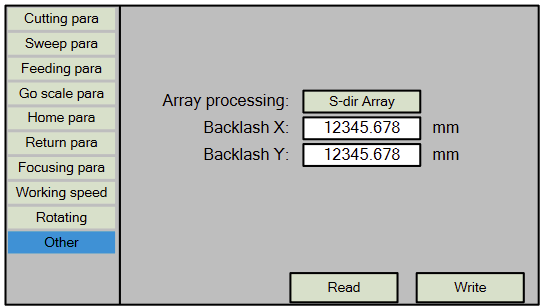