I purchased a A40640 15w (80w) Laser to play around with, I was told by the company that if I added Air Assist I could run the machine at any power setting to cut wood. I posted on facebook page and got educated!!! that I cant run my machine @100% as it will kill the diode.

All the information I found that lead me to buy the laser didnt say anything about this restriction, it said that the new module they use has two diodes and better cooling which gives it a better life span 20,000hrs

Could one of the actual experts tell me what I can do with this laser?

Can I run at 100%? for a short period or long period?
Should I say under X% and just do multiple passes

Or upgrade the cooling on the module to a better fan

I have owned CO2 lasers I just purchased this really out of curiosity and It seems great but I dont want to burn it out after days.

There are primarily 2 things I would investigate. Find out how this matematic is screwed together, ie how in the world the seller or manufacturer gets 80 Watts connected to the description of the machine. The second, equally interesting but even more important question is what the manufacturer recommends, with what powersetting and for how long, they guarantee a flawless production. I have an Eleksmaker 5.5 Watt that I have run with max power during the time it was in daily operation. But cutting with a nice result in 3 or 4mm BB plywood was / is not possible. The new diode lasers with 2 diodes and a mirror system are very interesting, but, 2x5.5 Watt minus loss in the optical path out to the material, gives (very generously calculated) 10 Watt. Has anyone ever measured and documented the real optical output of the new diode lasers?
My post is not meant as a basic discussion about whether one laser is better than the other, I have both types and am happy with all three.

No definitive answer but I never hesitate to run at 100% power on my diode lasers. A long-retired electrical engineer with failing memory and 40+ years industrial experience, I do remember HEAT being the major enemy of semiconductors. With adequate cooling/heat-sinking they generally last a long time. Among the dozen or so laser modules I have owned, I now have three of the Neje A40640 dual-diode modules and they perform well and seem well-built, with an adequate fan and heat-sink… and are never uncomfortably warm to the touch, even after 2+ hour jobs. Please give it a chance and don’t re-engineer it until you know it needs it. I have been very happy with mine, straight out of the box.

EDIT: No, these are not 80W, 40W, 20W modules… regardless what the [unscrupolous or not] “marketeers” put in bold-print advertising. To their credit, Neje specifies 15W as the true optical output power in the A40640 General Specifications section… though even that may be closer to 10W. Regardless, the square-ish beam geometry seems a great improvement and the laser performs very well IMO.

Got a ton of these claims on the solid state light bulbs for the house. Only one has lasted over a couple years. They probably could last for 20,000 hours.

Generally speaking, save the ‘high’ power for cutting, if possible.

Solid state equipment operating temperatures are based on ‘junction’ temperatures which is where the power (heat) must be dissipated away. This is the main cause of failure for ss components.

I have not been able to find an 80 watt laser at the Neje site. That laser is advertised by them as a 40 watt. It appears this laser is being sold as an 80 watt unit by some unscrupulous sellers, so beware. 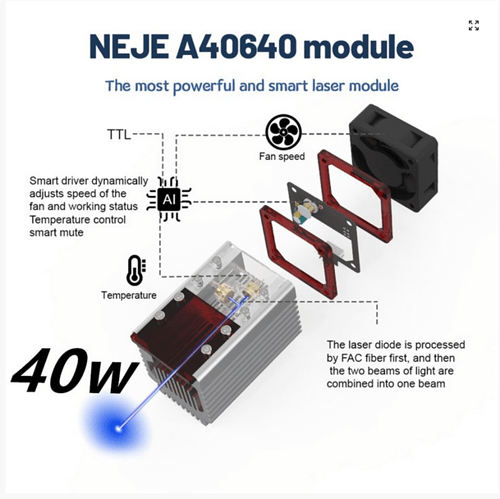 Most of us don’t have a way to measure the power for that lasers frequency. I can for my co2, but not the solid state.

yeah I have no idea where the 80w comes from because everywhere is 40w on the documents. they also told me it was 2 x 7w but I read like what you said 5.5 watt which is the max for this type of diode correct? im just happy if it cuts lol

thanks mate, that gives me confidence in using the laser for small cut jobs at higher power %

thanks mate, that gives me confidence in using the laser for small cut jobs at higher power %

Not to discredit 2kj4linux’s experience in any way but I’ll offer a counter anecdote with my Ortur module. It’s built very similarly in terms of heatsink and fan. I had a unit die with under 100 hours on the laser that I largely attribute to running above 90% power. Degradation wasn’t linear from my experience. It seemed to happen suddenly. So I think what’s happening is that short periods of overheating degrades more than extended periods of moderate heating.

There are graphs online that show a degradation curve.

Having said that there are folks on this forum that run their diodes hard and long. This is always going to be a trade-off. There’s no question to me that hard-driven diodes will have a shorter life but the lifespan could be reasonably long and worth the other trade-offs of time and potentially cut quality.

One thing I want to address from your original question. The way this is worded it sounds as though there’s a perception that the air assist is mitigating the power setting from a longevity perspective. That’s not the case. Air assist is only aiding the cut itself, not in any way helping to cool the machine.

No, that’s not my point either. If there are 2 diodes with 5.5 or more Watt combined with a mirror system - and it works, then it is fantastic. I just think it’s a shame that they can not just describe an otherwise fine product without exaggerating.
Why not just write 2x5.5 or 7.5Watt diodes which give approx. 10 Watt optical output power that can cut 3mm BB plywood in 1-2 passes?
But as many others also write, if a diode (or CO2) laser does not get shamefully overpowered and it otherwise does not get hot, it runs forever, (unfortunately a CO2 laser tube does not).

So, instead of 15W is a a real 10W, but even on those 10W you can only use a % of it?
Wonders how they would confirm or deny the usability above 80%.Feels almost like, if it died is because you used it above 80% catch all rule.

Diodes die, thats a fact of manufacturing, but at least on Ortur within 1 year you use them at your leasure, if their power output decreases furthen tha 20% they are replaced.

I just think it’s a shame that they can not just describe an otherwise fine product without exaggerating.
Why not just write 2x5.5 or 7.5Watt diodes…

It is a shame… I agree. But it’s nothing new. Back in the 60’s and 70’s, I remember the “muscle car horsepower wars”… everybody trying to outdo the others, claiming their car had more horsepower than somebody else’s. Didn’t matter to the marketeers whether it was a gross/net/brake/whatever rating… whichever number was bigger was what they put in bold print… and probably a % fudge factor on top of that as well…

How do you recommend checking the output of the diode to see if it’s lost power?

Well theres the scientific method, and theres the get enough samples through and you get a feel for it
I do these all day, on those little wooden business cards
A 5W module well focused should barelly mark 10%, light mark 20%. and so on

then some creative license is needed, depending on users material, and other aspects
Can also spot belt tension issues and alikes

I do have a FieldMate tester but they dont always tell the whole story. A module can have a full 5W output on power side, and be unable to engrave if optics are wonky. Which does happen.

As an after thought, the BEST practice would be
Run 1 test brand new → date it and keep it
Then when something looks strange run again and compare
Granted normally new users dont tend to have this routine understandably so.

5% (of the total) power drop after the first weeks of use is within spec. Other than that not so much

And yes, i am a laser hoarder i have modules from everyone and their mothers

Actually I was hoping for some kind of ‘instrument’ or how to use something that is already around.

I have a Mahoney wattmeter, but they won’t advise any kind of information about how it works on a different frequency.

I also have a Dohicky from Russ Sadler…

Thanks for the time… Does Ortur check the returned lasers? how?

I have a Coherent Fieldmate meter as i said, i am not 100% pro on its use but is quite “idiots” proof.
Focus or unfocus dont matter, distance within reason dont matter. it reads heat dump really. 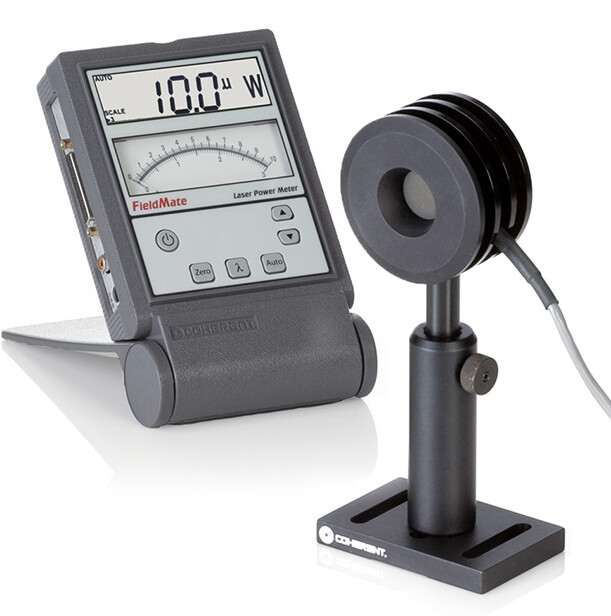 If you accept a comparitve measurement where you use a known good module as baseline to define any offset in readings, any 100-200$ laser meter should do most of the job.
Is hard to justify to dump 1500$ on a meter though unless theres a clear reason for that

The nuance comes on the methodology of testing.
example: Depending on the lense a module use you can get a 30% drop of laser power output vs without lense. Some tests are done without lense for that sweet extra 30% boost. I personally think that type of testing is a bit silly. If a module needs a lense, testing without is irrelevant.

So all my testing is done with lense installed and are relative to eachother
IF an ortur module claims 5W on the label and my meter shows me 5W, i assume if the next module i shows 5.1 or 4.9W they are real, comparative to my 1st test. And by the same token, a different brand module if it shows 10W its 10W based on my 5W baseline.

Regarding ortur faulty modules testing: We recall some modules if they have some peculiarity we want to dissect. I remember in the past a batch with faulty lenses - bad contaminated glass batch - we recalled some samples. But mostly as long as failure rate remains under 3% treshold we accept it as normal faults manufacturing variance and dont request the users to ship them back. Our failure rate currently is way under that 3% and in those i am including some other silly faults like bad wires, faulty lenses, faulty fans etc.
Quite happy with that figure myself.

thanks for the reply, I didnt mean air assist was adding power, I understand what it does, I just figured that it would help with the cooling in the sense that heat would be less as the air would blow away the smoke and heat at the nozzle. I was also thinking a bigger or better fan on top would help with cooling

my Neje rep told me that 100% is fine and they dont have any issue with people running their lasers at this. But I will keep other brands in mind for my next one