Over Burn issues, Focus, lens what am I doing wrong?

I am having a burn issue I am hoping all the experts on here can advise me on. As you can see from the pics there is a distinct second burn mark appearing on higher power settings. I feel like I have focused the setup pretty well. Is this a lens issue a focus issue what am I doing wrong? As you can see it is on the left side of the main cut. Any help would be much appreciated. Chinese 100 watt CO2 laser 6mm focal length. 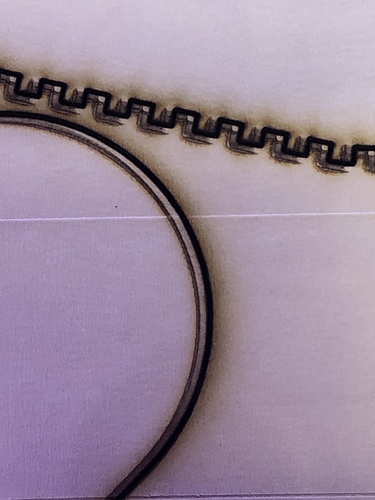 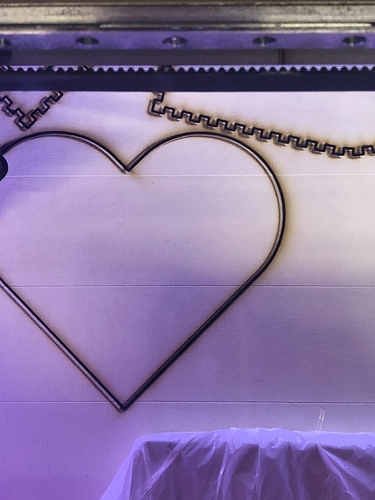 I’ve not experienced this problem, but have read here of others who have. It is suggested that the laser is bouncing off the inside of the nozzle, creating a second lower power output creating the second set of lines.

Consider to remove the nozzle and lower the laser/raise the bed until the tube is flat on a test piece. Alternatively, shim up the test piece with a block of wood. Draw a circle around the laser tube on the test piece, fire the laser and check for centering.

Once you’ve ascertained that the shot is centered, perform the test again, but leave the test piece where it is after the first firing and drop the bed as far as it will go.

The second firing should over burn the first. If you get two separated burn marks, there’s a more severe alignment problem.

I would start from the beginning and do a mirror alignment. You can lose allot of power through the mirrors if their not aligned. If you just want to get rid of the double burn for now use the suggested procedure or Google it. I like this guide:

Keeping the invisible laser beam aligned between your laser tube, mirrors and lens is essential for the continued good performance of your cutter. Here's a handy guide.

Thanks for the suggestions, When I first got the laser I spent days working on the perfect alignment. I just completed a check on the alignment of the mirrors and they are all exactly in the middle in convergence from as close as possible to as far away. I conducted a final burn check on material after cleaning the lens. Now the additional hot spot is on the other side. This is leading me to believe my lens may have a flaw and it is focusing most of the beam but there is something getting away. Do you think it could be an imperfection in the lens. I do see a hazy spot on the lens which will not clean off.

Well, I got it figured out. The lens was crap. Got a new one and the issue is gone.

Thanks for the recommendations.