I had imported a PNG customer file to mark a cup. File processed in LB with a large square around the actual image, I was able to estimate/overcome that without too much problem. The logo had 2 colors, one solid black one orange. The preview looked good, and the laser was set at the same min/max power -

Interesting - and I’m sure LB did exactly what I told it to do…only the outcome wasn’t the expected one.

How can I fix the .PNG in LB to be all one color and avoid this in the future?

ps -I’m tried converting it to a vector in inkscape - but the image isn’t high of enough resolution and the tiny lettering details get “messy”. 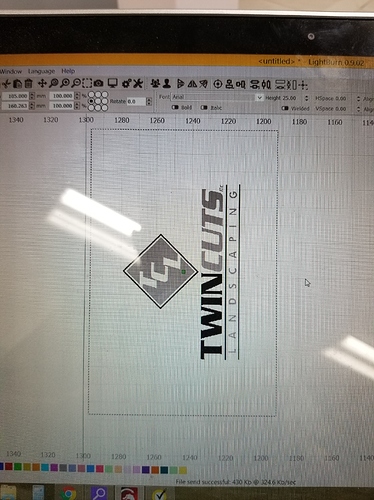 clearly throttled the laser power back on the orange portion rendering a “shaded” product but not one that I could pass on to the customer. Basically…the black portion of the logo etched the powdercoating off cleanly as I would expect, but the orange portion did not.

What is the result you are trying to achieve?

Sorry for being unclear-

Just a consistent mark across the entire cup/logo instead of the shading attempt which doesnt look very good. I’m sure I could/can convert to a vector and then manipulate the color using another program…just hoping LB would do that for me and I can save some time

Enable Threshold mode for the cut, instead of dither. Check the preview and if the logo doesn’t show up, lower the image brightness on the “Shape Properties” pane about 10% and try again, until it looks right.

Brightness was already at zero, and raising it just made the shaded portion lighter.

Adjusting the gamma from 1.0 to 3.0 made the logo all the same contrast and appears correct in the preview.

Go lower, not higher with the brightness setting. I took my sample from zero to -20 and got a good result.

Into the negative I go

… and raising it just made the shaded portion lighter

That’s why I suggested lowering it, but your method works too.

Threshold mode is just a simple black/white cutoff, normally at 50%. By adjusting the image brightness up or down you can change the outcome: 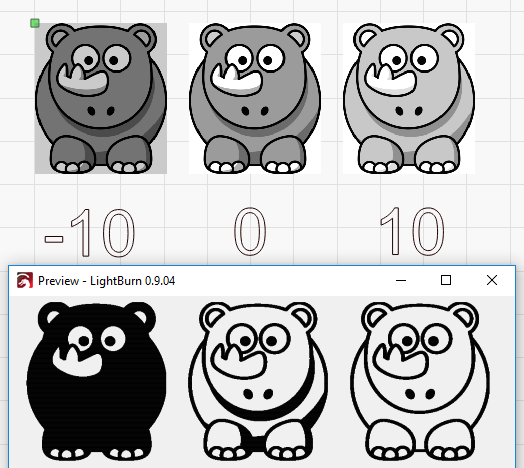 Gotcha. New problem…maybe laser related but I dont think so…

Output/preview looks good…but typical settings to use with cermark arnt working. I dropped the speed to 200 and upped the power to over double what I use (normally 25% on a 150w) and it’s barely marking at all. Like its nerfing the laser power.

Maybe I should just convert to vector elsewhere? I’d really like to learn how to make this work though

Well…not sure what I’ve done.

Checked alignment, good
Checked output at nozzle, dead on in the circle (using pulse)
But running a file…any file…laser wont power enough to burn through a single layer of masking tape.

I reset the laser, no change.

Make sure the ‘Enable’ flag is on for the tube, perhaps, and make sure you have the laser main switch on. On my big machine if I have that off it just doesn’t fire, but still runs through the motions.

When cleaning/replacing the pens I put it on the top side of the tobe… not the bottom as it should have been. No wonder the spot size on the pulse was so big.

Seems to be marking well now…although I only cleaned the lens off after I was having trouble the first time. I’ll try and mark the png file we spoke of earlier and see what the result is. I wanted to make something that I new worked first which is why I resorted to an old file.

I’m just relieved it wasn’t something that could’ve been my fault.

Nah! I’m just new at lasers (been operating a cnc plasma for some time now) and have to learn as I go. 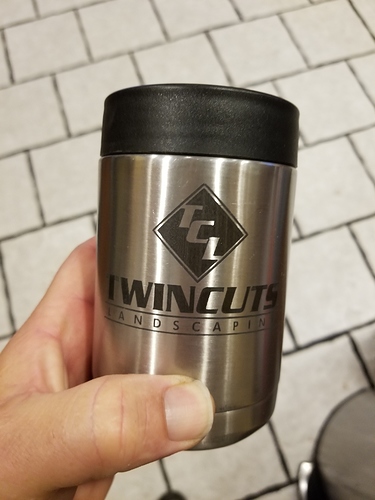 Hey, lookie there! Glad you got things sorted and thanks for the kind words. Looking forward to seeing more successful works.