A few months ago I started work and noticed that the resolution on my camera was terrible. When I had been working the previous day, it was fine. One big change I noticed was the silver magnets I use. They are basically invisible to the camera. I have to mark them with a big X to make sure I don’t run them over. I took the camera from my second laser, (I believe that is an LB 120 Camera) plugged it in and it too has poor res. I then tried it again on my second laser (running a Windows PC on this one) and it was just fine when set back up.

Anyway, it hasn’t bothered me enough to do anything until this evening. Does anyone know if there are any settings or anything that would be causing this? I attempted to attach a screen shot of the camera.

I am using the 180 (I think) LB camera with the supplied USB, no extensions. Also operating a Mac that is specifically designated to run this laser. It has no other uses. I have also tried to run the camera wizard a few times (thanks to the updates wiping out camera settings :), cleaned it off with a microfiber cloth, adjusted the focus and maybe a few other things. 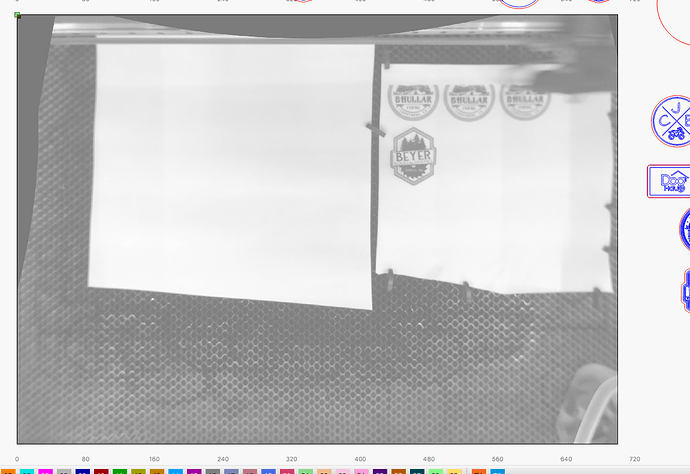 Can you show a pic of what you see through the camera preview window?

I have the same issue with a brand new camera. The live view is clear and in focus, the overlay view is horrible.

Yes, good point that was added just there. Live view is very clear and nice. The overlay pic is what stinks. 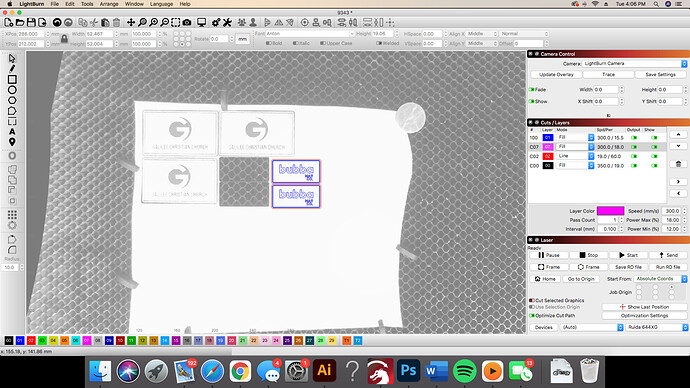 You have the ‘Fade’ toggle enabled. I’d suggest disabling it.

Thank you Ray - This does give a different look, but I usually run with it faded because the blowout at the bottom of the table is terrible and I can’t see a thing - where there is the most light coming in.

I appreciate all the suggestions, and it really isn’t that big of a deal. I am just curious as to why the overlay is so much worse than the live OR the feeds from other programs.

Can you show what the live view looks like? The overlay shouldn’t look dramatically worse than the preview unless you’re only using a small part of it. If your camera sees a really large area around the workspace of the machine, and then you’re cropping that and zooming in, that would explain a lot.

Where is the fade toggle to disable it ?

I was browsing in settings (trying to turn off autosave) and found a toggle for camera resolution and color. Clicked those and I am in business. crystal clear.