Hi dear lightburn community,
as you have already helped us out multiple times, maybe you can help us with our newest and biggest problem yet. We recently reached a breaking point where a second laser became mandatory. We were using a 80W chinese laser and tried to find a second one identical to ours. The new laser came with a TopWisdom Controller, so we switched it to a Ruida RDC6442. At that time support for TopWisdom was not implemented yet. Now our problem is, that the laser tube seems to have power differences to our first laser, so we are not able to use the same settings on both machines. The laser tube does not produce a beam under 20% power withe the same machine settings as the first and seems to be less powerful than the first one overall. We did some cutting tests on cardboard and the second laser was just able to cut the corners, but not the straight lines with the same settings as the first.

Maybe some of you already encountered similar issues and might present their solution to the problem. What we want to know is, if it’s a harware issue caused by the tube / controller / mainboard or if this can be fixed through the software?

We already thought about lowering the power settings to adjust it to the second laser, so we can use the same layer settings on both machines, but we wanted to hold back on that solution to the end.

I will attach two pictures of the Tube Specs. If any of you need more informations about our machines, feel free to ask, we will try to provide any piece of evidence to tackle this issue.

Thank you in advance
Maxim 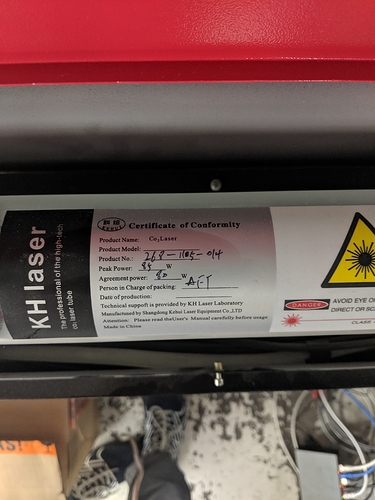 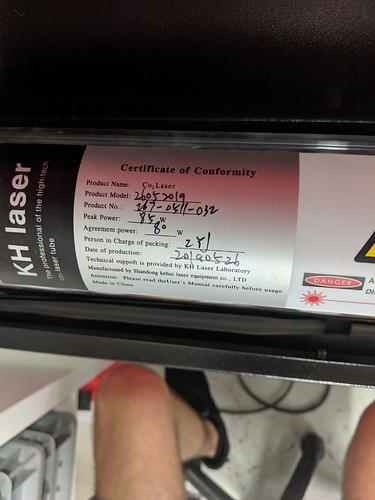 Hi, have you checked the beam alignment on the second laser? even a small error can rob you of a lot of cutting power.

We adjusted the mirrors, but the problem already occurs right from the tube. The tube does not seem to create a beam that exits the tube if the power is under ~20%. If a paper is placed in front of the tube nothing happens to it.

Both tubes are set to min. power 1% and max power 99% in lightburn, but our first tube can handle such low power settings under 20%. Thats why we are confused and wonder if we can somehow fix it.

That could be a characteristic of the tube or the power supply. My 50W for example, doesn’t mark anything below about 15%. I haven’t tried with paper directly in front of the tube, but it won’t mark card on the work bed. Do you have a milliamp meter on the laser that shows the actual current being drawin at 20%? that may give clue as to whether it’s a PSU issue or the tube.

The first place I would look is the termination points on the laser. They just wrap the wire on the posts and silicon them on, pretty sketchy. Any arching, even a small amount will reduce your power to the laser. Take them off and clean the posts with some sandpaper and re-strip the conductors. I then wrapped them on the posts and used a wire nut to hold them snugly. Don’t over tighten the wire nut as not to damage the post. Then re-apply the silicon topper that they used, or replace with a new one and re silicone.
Hope this works.

Unfortunately we dont own an mA meter.We could try to connect an multimeter.

We will check the connections, thanks for the tip!

If you fit one, put it in the 0v return lead! not the High voltage one…