I’ve read through manuals but it’s not coming together for me.

I would like the job origin to be where I have placed the laser. But no matter where the head is when I press Origin, the upper left of my LB space corresponds to the upper left of the table (physical 0,0), rather than where the head was when I pressed Origin. I have gone into Z/U, Origin set, and cleared Multi Origin enable as the controller manual seems to say to do. However, no change, the origin still remains at physical 0,0. I’m wondering if I need to do something in LB as well to set where in the drawing area my job origin should be. Other systems I have used automatically set that to be at the upper left of drawing extents. In any case, a recipe for the job to start where I physically chose the job origin would be awesome. Thank you.

Please help machine and LB agree on origin
Not Cutting at Current Position (Or I'm Not Understanding)
Pumatooth (Don) September 2, 2020, 12:15am #2

I would like the job origin (upper left of drawing extents) to be where I set the laser head. However, pressing Origin on the machine does not set the origin there, even if, as the Ruida manual seems to say, I go into Z/U, Origin set+, and clear Multi Origin enable. I do not know what the four other Origin enables are for. It may be there’s something I need to set in LB as well, but my reading of the manuals does not reveal it to me. (I’ve no problem with moving my drawing so it’s all the way in the upper left corner (0,0) if that is necessary, but I still need the machine to start working where I tell it to.) Any help determining the recipe would be appreciated. Thank you.

I’ve read through manuals but it’s not coming together for me.

In case you have not seen our in progress rewrite on the subject: https://lightburnsoftware.github.io/NewDocs/CoordinatesOrigin.html

Does LB require you to hit the ORIGIN button in anything but absolute coordinates?

I’ve found I have to hit Origin else it will go start at wherever had earlier been set as Origin, even with Start From set to Current Position.

Correct. It’s a quirk of the Ruida controllers. Go Scale or Frame will go from current position, but start goes from the Origin. I’m told it’s so you can move the head out of the way to set the next piece in place and keep your starting point. It would be nice if that was included in the Ruida documentation, but then again the Chinese to English leaves a lot to be desired any way.

FYI, for Ruida specific questions, they have an excellent user forum. https://rdworkslab.com/

Go Scale or Frame will go from current position

Not in LightBurn - we actually correct for that. If you use the Frame buttons in LightBurn it will always frame at the correct location, regardless of where the laser head is currently placed. I don’t have control over the frame run from the controller panel itself though.

I stand corrected Oz. Too used to hitting the button on the laser.

I do not have such a requirement with my Ruida 6445 controller (needing to use the origin button on the HMI). Wherever I place the head, start from current position starts the job right there. Framing is the same. 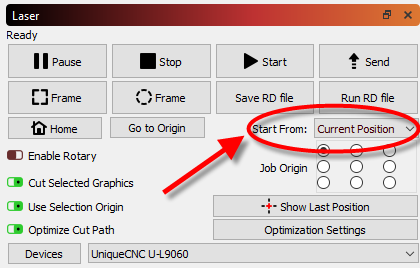 Job Always Starts Where Head is at Rest; Origin is Set (reset) to the Current Position

Framing Always Starts Where Head is at Rest; Origin Unchanged
(i.e., the framing origin is again anywhere I have the laser head, disregarding any origin of the machine. The framing, however, doesn’t reset the origin like running the job does).

This is how I have my Origin set+ configuration: 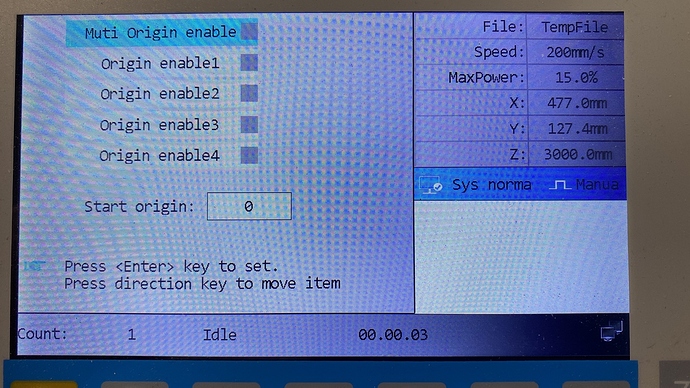