I opened Lightburn today and my normal settings upon starting were not the same as usual. First, my height & width were in mm instead of inches (I never changed anything that I am aware of). Also the speed will not allow me to type 3 digits only 2 so if I want to score a line or engrave it won’t let me go past 196. My speed when I opened a previous file was different and set at 0.3 or something similar and I’ve never set it on something like that. If I put it on a speed of say 17 it goes super fast as if I would have put it on 350 normally. Also all of my past files that I did are all weird like that too now and not saved as my original speed settings. It’s probably a simple fix somewhere but I’m not sure where to go to fix it or what could be the cause. I’ve exited out of Lightburn, turned the laser off, turned the laptop off still the same problem. Any help would be greatly appreciated as I have several jobs to do. TIA

Hi, have you checked your settings in ‘general settings’?
Top of the screen ‘the cogs’ and use the ‘best for co2 lasers’.

Thanks for the response but I figured it out just a few minutes ago by tooling around in the settings area and reading some other comments. It had to do with the in,mm,sec box not being checked.

I do not see this in my settings 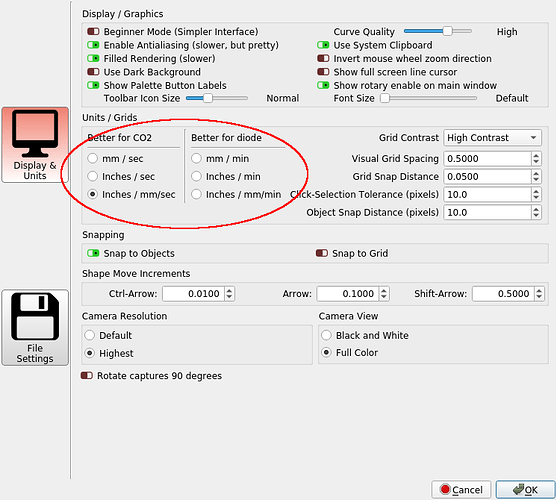