Suggestion on a tool

Your software is amazing! One tool I think is missing is a measuring tool. Sometimes I like to resize objects and having a tool to measure would be super convenient rather than exporting out than back in.

It already exists - use the Line tool as a ruler and read the length in the status bar at the bottom. Click on the first point to measure from, then hover over the 2nd point, and you’ll see the length display update in the status bar. Press ESC to (or right-click) to stop drawing the line, and no changes are made to your design. It was designed for this.

What is missing from the line tool is the ability of a dedicated measuring tool to add a text box with the length automatically. A lot of my customers want to see a dimensioned drawing when I quote the job. Currently I need to export a CSV file from LightBurn to another program to add the dimensions. Not a huge deal, just an extra step.

The program I use to add the dimensioning has a measuring tool that pops up a text box the user can position after the start and end points are clicked. The text box then fills with either the dX or dY depending on the orientation of the dimension line. 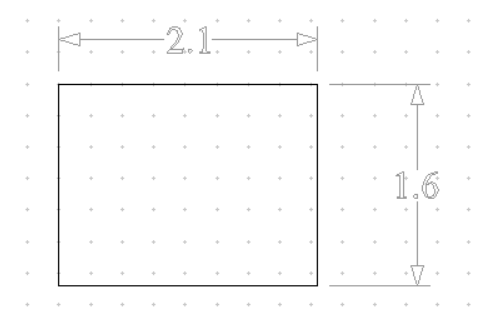 I could add a new tool for this, but I see a couple potential issues:

The first is really hard - it’s parametric modeling with construction history, basically, and it implies a lot of infrastructure we just don’t have. The second is more reasonable, and I have a few ideas for how that could work.

I would NOT expect the dimensioning to be attached to the shape or to change if the shape changes. It would be nice if the line and the text were grouped together so it is easy to remove them.

My use case is to add the dimensioning, save the screen image (maybe generate a preview first) let the customer approve the drawing, then remove the dimensioning from the project.

If the customer requests changes I remove the old dimensioning and create it again from the new version.

I am pretty sure parametrics are way beyond the scope and price range of Lightburn.

In regards to Fusion 360 being free: No it isn’t. Just hobbyist and small businesses in their first year are getting permission to use a watered down version without charge. Otherwise it costs quite a lot!

So dimensioning, parametrically attached, might be asking too much.

On the other hand a quick dimension tool showing the distance between 2 klicks (or one click on a vector) would be nice and helpful. Perhaps a choice in settings whether they stay shown (not parametric) or disappear when moving on to the next function.While working on that showing radii or diameter or absolute angles would be helpful as well. All this data is already available.

For the temporarily visible option: just show it as long as the mouse button is pressed. After release the function is ended and the “select” tool is active again or it stays in Dimension mode if there is an option (one time vs. continued).

Yes, the trick with “line” command works but is a cumbersome workaround and might lead to errors (forgotten line etc). A dimension tool with BASIC functions would be a nice professional touch.

The line trick is not a trick at all, it was designed that way on purpose and is not a workaround.

The line tool is intended for measurement. When you draw a line, nothing is actually created in the design until you click to drop the second point. It already displays the X distance, Y distance, and length of the new segment, and if you draw more than one, it shows the angle between the current and previous segments: 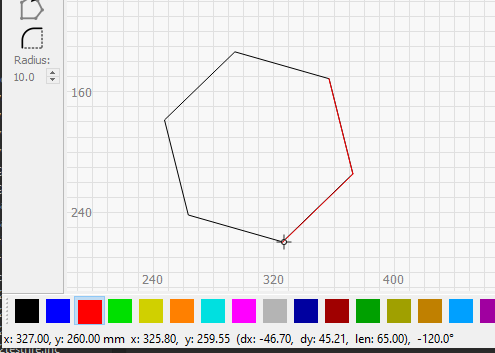 As Anthony mentions, it was intended to be used this way - I figured out that a ruler tool would require the same number of clicks, so rather than make a completely new mode that just duplicated the existing functionality, it was easier to piggyback onto it.