The latest update in the Cubiio 2 Kickstarter page says they are working with Lightburn for their Cubiio2 slim profile laser etcher / burner. Can Lightburn shed some light on this collaboration? Will Lightburn be able to control the Cubiio 2 directly is what I am really interested to know, as right now, the generated gcode has to be transferred to the laser before it can start the work. This process of going back and forth really takes a load of time, especially when you are at the testing stage for a material.

That is something we are working on, yes. 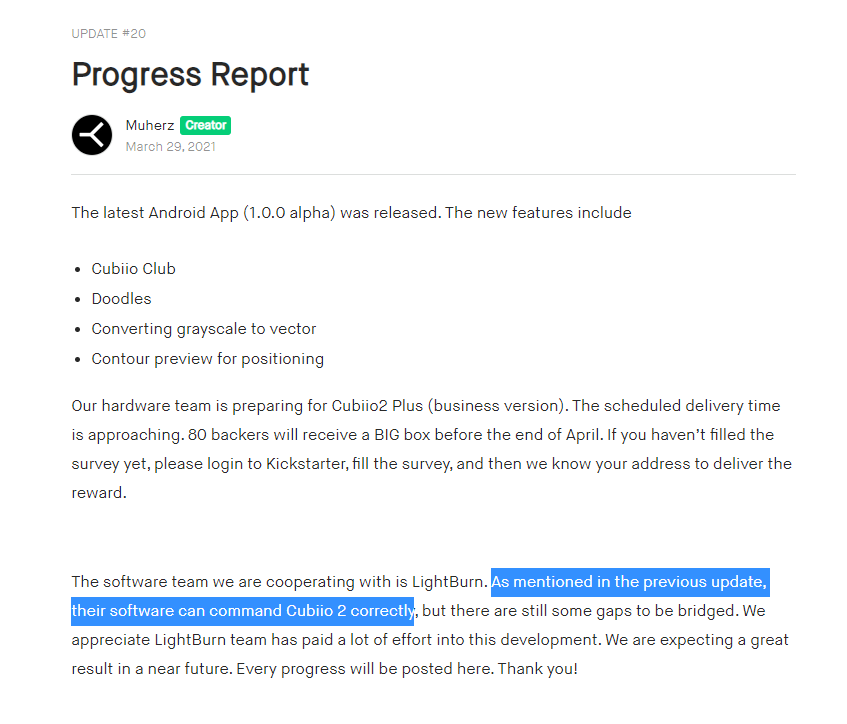 @raykholo Any timeline that you can divulge? If you are not able to divulge, at least let us know if Lightburn will have a direct connection to it, either via WiFi or cable? Any scrap of info from you will be very much welcomed

Timelines are always a bit fuzzy, as development priorities shift around as various needs emerge. (that sounds evasive, but it’s not intended to be, it’s just true).

I have a Cubiio 2 here at my desk, have some early work done communicating with it, and have the basics of the protocol setup done, status reporting, and jogging. I need to pull some of our GCode generation engine out into a distinct piece that can be called from other code, because Cubiio isn’t streamed like other GCode devices, then I have to clean up the communication, add support for framing, and fill in a few other gaps.

We’re also in that weird limbo before a move - LightBurn is actually moving to a new headquarters around the end of this month (what normal people would call a house, but for us is actually two buildings, one for LB and one for Sara and I). That’s already impacted development and support a little, and while we’re trying to minimize the impact, it’s going to shift things a bit too. Once it’s done though, I’ll have much more space to leave machines like the Cubiio permanently installed instead of having to rotate hardware, so things should actually start to move faster once we’ve settled in a bit.

That’s not a time, but hopefully gives you a better idea of why it’s next to impossible for me to give you one right now.

Likely a few months out still.

@LightBurn That’s great to hear something is happening behind the scenes. Please keep us posted on the progress. I will send this link to the FB Cubiio 2 group so they can also help to keep this thread going. Happy moving and stay safe!