Ok, so I have the latest version of Lightburn, but the problem still exists. Upon trying to do etching nothing comes out correct. Vector lines won’t connect on some, circles that are supposed to cutout start to make 1 pass and then the laser gets back to 0 but then starts to make spirals for the remaining passes…

The latest project I’m attempting to do is simple vector lines and some lettering, I’m going to attach, previews and the lightburn file… I have reached out to Sculpfun but no response as of yet. 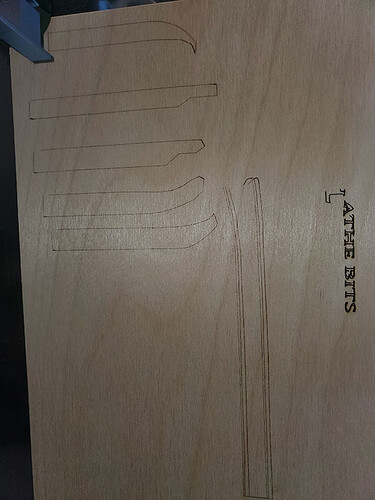 20220305_094721576×768 64.3 KB
First image is on a test piece of wood, notice the lettering and notice the one etching that never connects for some reason (also multiple passes don’t line up for some reason as you can see and no the test board has not moved) 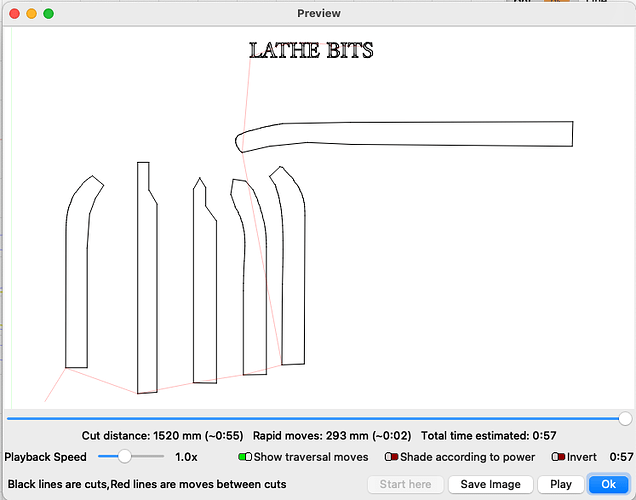 Seems to me you’ve got some mechanical issues going on. Check the usual culprits:

All the belts are taught, there is no slipping as it moves, either by hand or via the software. If it were slipping wouldn’t it slip in multiple places not just the one space?
I checked the belts, no teeth are missing either.

Another really strange thing is the lettering notice how large the L is compared with the other letters, when in the file and preview they are all the same size

If it were slipping wouldn’t it slip in multiple places not just the one space?

Yes, if it were a belt problem you’d see it at multiple places and not necessarily at the same spots. Maybe I’m missing something but it looks like you have issues at multiple places. What is the “one space” you’re looking at?

Another really strange thing is the lettering notice how large the L is compared with the other letters, when in the file and preview they are all the same size

I was suspecting you had a combination of issues going on. The letter distortion for the non L characters looks like binding from wheels being too tight. The misalignment issues could be caused by wheel tightness if it’s forcing missed steps. But thought that could be caused more from belt looseness.

If your thinking right now is that it’s a software issue I’d suggest putting that far back in the list of possibilities as it will be a distraction. This type of thing is almost never a software issue. Check the gcode if you want to put yourself at ease.

Could the belts be to taught?

Absolutely. Taught but not stretched. Remove any slack from the belt and just enough tension so that slack is not easily reintroduced… but they should not be cranked.

Have you checked for wheel clearance?

its a lot looser now but still off 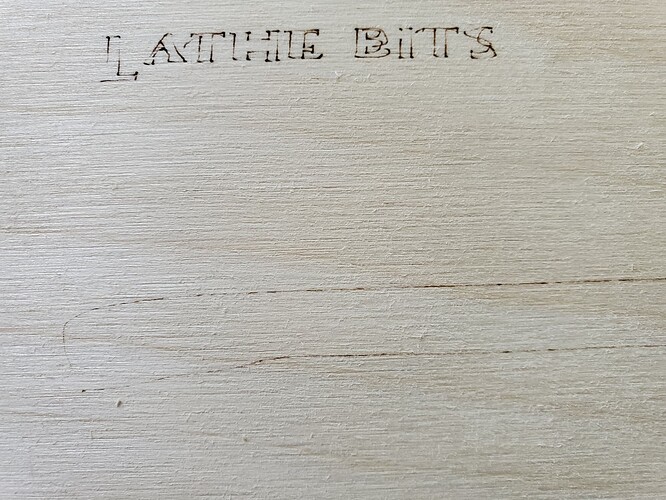 Notice the S on the lettering, the vector on the one below the lettering is almost connecting, looks like I need to do some playing around with the belts to get the right amount of tension

The one on the left side (y-axis), away from the drive motor is free spinning there are no locking bolts on it like the other side, the x-axis is secure

How are the stepper and toothed pulley physically attached? I don’t imagine it’s machined from a single piece of metal so there must be some mechanical linkage.

How about the wheel situation? If you press gently against the laser module, do you get a lot of rocking motion? If so, wheels need to be adjusted.

In general, look for anything that feels loose. Move your head around by hand and see if you feel any slop back and forth to all corners.

Not sure what you mean “stepper and toothed pulley” but the only thing that feels loose is that left side y-axis but I’m assuming its supposed to free spin. 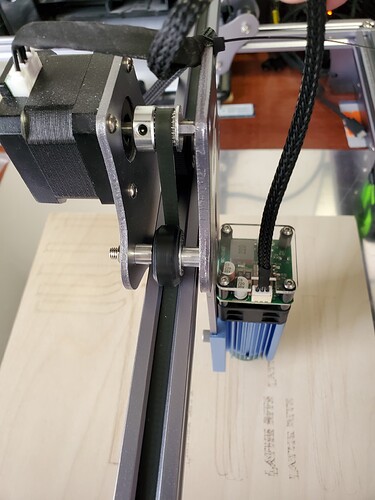 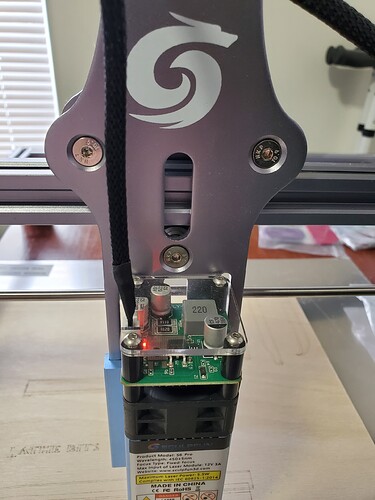 Take a look at this diagram: 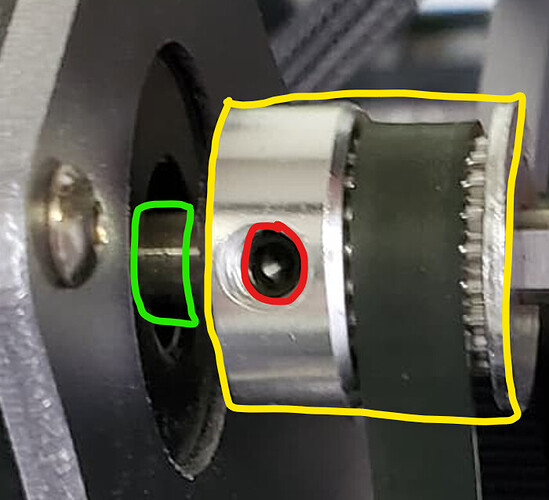 Make sure that the pulley is not able to rotate on the shaft. It needs to be secure. If not, tighten the grub screw so that it’s aligned against the flat part of the shaft. If it’s not getting secure in spite of tightening make sure there’s not another grub screw underneath blocking your way. Do this for all steppers.

Make sure the linkage that connects the rod for the Y-axis stepper similarly is well connected and with minimal backlash.

Can’t tell from your photo if there’s a gap but the wheel that’s roughly beneath the visible pulley, make sure that and the other supporting wheels are well touching the railing. Should not be squeezing it tightly but should have no visible play.

Stepper shaft is keyed and secured with the grub screw, there is a second grub screw also that is secure on the shaft. When I turn it I feel what feels like bumps as it turns, same with the y-axes, I’m assuming this is normal as it is on both.

As for the wheels they are not tight on the crossbar but there is no play either, with the belt off they move like butter.

When I turn it I feel what feels like bumps as it turns, same with the y-axes, I’m assuming this is normal as it is on both.

Not sure but this might be a problem. If you turn the pulley back and forth does the shaft move perfectly along with it? Or is there backlash before the shaft engages? Often when this is a problem you will feel bumps as the grub screw is settling at different points along the shaft. You might also be feeling the motor resistance so not certain.

If you’re not sure then remove the grub screws entirely. Then pull the pulley from the shaft… make sure you can see light all the way through the grub screw holes. Retighten with a thread locker if you have it… blue loc-tite is enough… don’t need red.

As for the wheels they are not tight on the crossbar but there is no play either, with the belt off they move like butter.

If you attempt to lift the entire laser mount… are the bottom wheels already engaged or is there a gap before engagement? Same with top wheel on the way back down. If no, then should be good to go. Check for Y as well.

If you can’t find any source of slop then try running the job again but at a much lower speed. Does the quality improve? If so, then still likely something mechanical at issue. If no visible improvement then possibly something else.

Got it! Went and got 2 more grub screws for that left y-axis, that seemed to do the trick.

To your questions about the wheels they are fully engaged with the guide rails and the shaft had no play, think it was those grub screws on the left y-axis

Huge thanks for the troubleshooting with me!