Unable to connect and get started and can't seem to find this problem on any forms :( 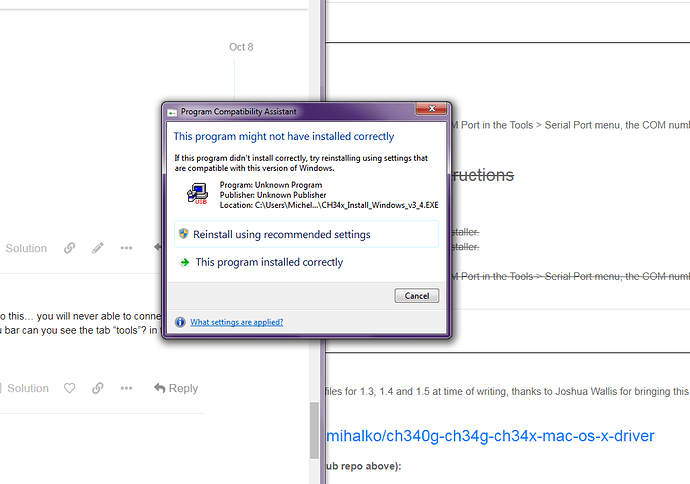 I have tried reinstalling but that window just keeps popping up

and what about “this program installed correctly”? tried?

yes, tried that too. The window closes but no change with the problem.

so the problem may be the usb cable or the usb port in the motherboard, do you have another pc?

Or, you can simply try another USB port on your PC
…#justsayin

No unfortunately. Do you think that’s the case even tho when I plug in the cable the system recognizes it? It makes a sound and shows up in the USB tab. Have tried all the different ports and same issue. I would be stoked if it was just a cable issue

well you have only to try, i regret not to be there to help you better than this…

I will. Thank you for your help anyways, I really appreciate it!!!

Hi I had the same nightmare on a different piece of equipment, nearly went bald ripping my hair out, it was on a friends win7 PC, and the driver would not install and the software did not install correctly either.
The solution was rather than run the programme in win7 compatibility , it was to set the Install file to win7 compatibility before installing on both, the driver and the software.
Try installing the Driver Via Laser GRBL set up the programme in Win7 compatibility and also Programme software. it also works on other software if on a windows 10 machine and you want to use software for win 7, sometimes 10 throws a message incompatible but its the install that needs the compatibility, not the programme when installed although always a good idea when successfully installed to run it in the correct version.
Bit of a long shot, but it worked for me.
Good Luck

Just an after thought but I sometimes have a connection issue in Lightburn, open task manager and then programme tab, end task on any com surrogates and re open the programme. and check the Baud rate on the port is matching on software to the Port in Device manager. when testing with laser GRBL.

In your image of the Device Manager with the laser plugged it shows “CH340 COM3”, with everything plugged in and LightBurn running does COM3 show up between the Devices and GRBL buttons in the laser window (look at the image that LaserWillie posted above)? And if so, what happens if you select it?

The com1 and lpt1 are set within the bios of the PC, you could try switching them off, that will stop any conflict assigning com ports and also remove them from system resources

Thank you, it’s nice to hear that at least I’m not the only one having this problem. I played around with your suggestions last night for a few hours and didn’t really get anywhere but to be honest this is a little over my head so I’m not even totally sure if I was following your instructions correctly. I’ve uninstalled everything I’ve done in the last week and I’m going to try again. Hopefully I figure this out while I still have any eyebrow hair left… Thanks for the help!!

Unfortunately I think that might have been Killrob’s image you were looking at, “CH340 COM3” isn’t showing up on my device manager anywhere

have you tried with a new usb cable?

sorry pal, this is the image of my PC

and don’t you know anyone who can lend you one? only to try?

I don’t think so but I’ll ask around. Anything is worth a try! Do you think that could be the issue even tho the computer makes the connected sound when I plug it in?