I’ve got a cohesion3d board in my 50w laser. my desktop is 15ft away from it and I successfully use the laser with this connection. However, I want to use a camera. So I’ve tried some cheap usb hubs, they don’t work. I installed a ethernet cable to use a ethernet->usb adapter set. The cheap ones, are not powered and fail, Installing a powered usb hub close to the printer actually burns out the recv device. So I’ve purchased a specific powered usb over cat5 adapter. Camera works fine. Laser connects, and then ALARMS out while attempting to home. unplug the cat5 usb cable, plug in the 15ft usb cable and it works fine. This is looking more like a hardware issue since I connected it up and used simplyfy3d to connect to the laser. While connected with the 15ft cable, laser homes. connect the us hub, and it fails.
What’s odd is the smoothie laserboard responds like it should to M119, M503, M500 etc. But refuses to home with G28.
On a similar note, I have a HP laptop. I’d like to use it next to the laser since it’s handier when doing a setup. The laptop shows the same issues with homing and the ALARM fail even though it’s physically 4 ft away and using that same 15ft cable or any other USB cable I own. laserboard responds properly to M119, M503, M500 commands. Frankly it would be nice if ethernet was not disabled with the laserboard since I’m going to have to hook up my Duet3D v3 with raspberry pi if I want to connect over a distance. At least then I’ll have a touch screen interface. 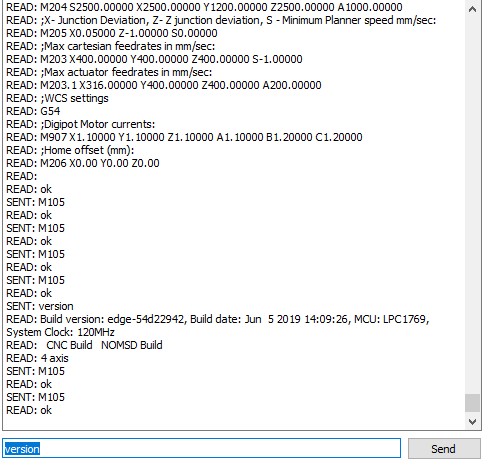