Hello all,
I want to be able to raise my Atomstack x7 to whatever height I want (within 300mm). I’m tired of fiddling with legs to raise it up to use my rotary unit. So, I have an “Annoy Tools GRBL Board” and I’d like to attach the 4 corners of the laser to each of the 4 stepper slides. Then raise or lower them simultaneously. This would be my 1st “CNC build from scratch”. Any help would be most appreciated.
Rich

Is there a particular reason you want to try to lift the entire machine?

If no, you may want to consider a couple of alternative designs:

These design changes could allow you to use a single motor design.

Also, it’s possible that your current Atomstack controller board has a Z-axis port that you could plug into without having to replace the entire controller. It may require an additional stepper driver module to be added. You may want to see if this is an option before swapping out the controller entirely.

Yeah, I’ve thought about that, but I think lifting the whole frame is easier for what I want to do. I do a lot of wood working and at times would have much taller stuff to work on requiring clearance for the gantry. I have a very finite amount of room. My controller does have an unpopulated “Z” header. If there was a way to have it spin all 4 axis that would be great.

In that case the only thing I’ll caution is that leveling 4 independent motors may be tricky. Regular GRBL does not support a software solution for this. Even if you tried splitting the Z signal to 4 motors you’d have to deal with the current draw issue and the potential issue with leveling.

I believe grblHAL can be configured to gang all 4 motors and you could potentially use auto-squaring to do the leveling. I’m not personally familiar with this. Your controller would need to support 4 steppers and limit switches for the Z plus X,Y so 6 total. Not many laser boards will support this. I suspect there may be some CNC boards that get close, 5 would be relatively common. For 6 you’re typically in 3D printer board category where there are several popular solutions. If your Annoy Tools GRBL Board is the general one I’ve seen it would typically support 3 axes.

I’m not certain if grblHAL or other GRBL-like firmware supports the 3d printer boards. If not, you may need to work with a Marlin based solution.

Another possibility is that you could create a separate solution just for Z on one controller and leave your existing controller to manage XY. The drawback is that you’d have to control the 2 systems separately.

I wouldn’t mind having 2 systems. One for the Z and the existing laser control. Then I could get away with 4 axis and 4 limits. The “Annoy Tools” has X1 Y1 Y2 Z1 and all the limits. I bought that board before I realized that static was the problem I was having with my Laser. So Now it’s a spare. I also have the original control board from my laser which has the same outputs as the “Annoy Tools”. I would just have to figure out how to clone the commands from Z to the remaining axis, I assume.

Check to see if Y1 Y2 support independent stepper drivers. I suspect it uses a single driver split to 2 ports. If that’s the case then won’t be independently addressable. If they are separate that means the GRBL version supported would have been a custom build that would have duplicated the same signal to both drivers. Hopefully you’re in the latter camp. Although you’d still not be in the clear. From what I know the Annoy controllers use an 8-bit Atmega328p. Can you confirm? grblHAL only supports 32-bit MCUs as far as I know.

Not sure about the technicals. This is the board I have coming. https://www.amazon.com/dp/B09C8DG9KR?ref=ppx_yo2ov_dt_b_product_details&th=1

The board does not have independent Y1 Y2. The telltale sign is that there are only 3 stepper drivers on the board. I’ve outlined in green here. 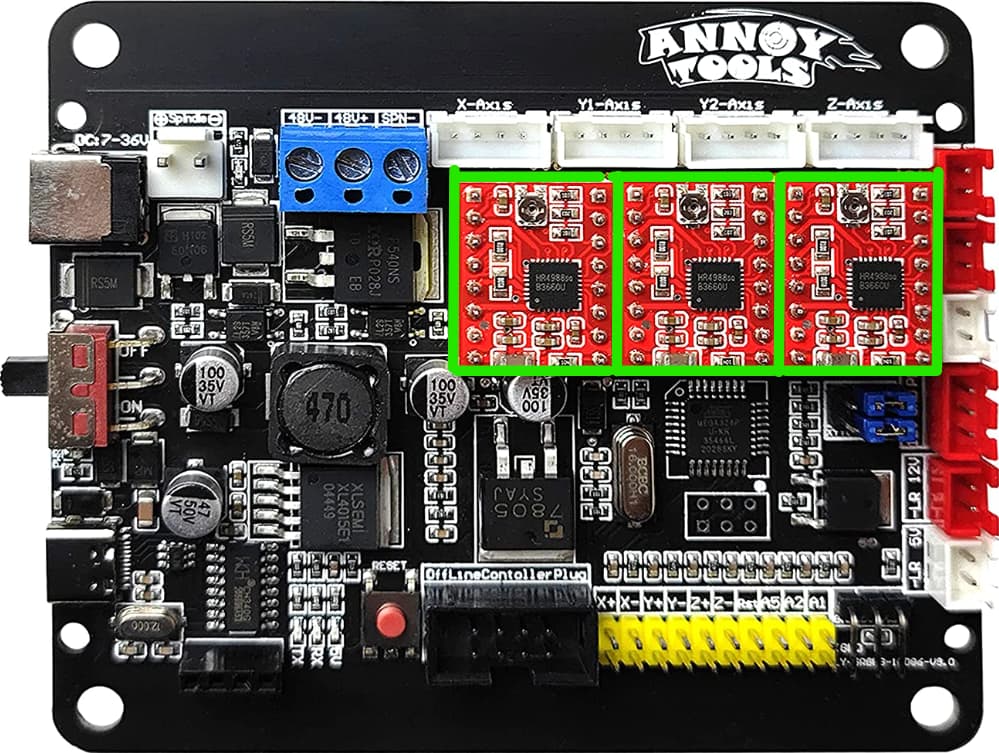 That means that Y1 and Y2 share one driver.

Ok, so I know I’ve seen one of these boards with 4. Let me see if I can find it again.

Something like this thing? Or if you have a suggestion. I’m all ears. 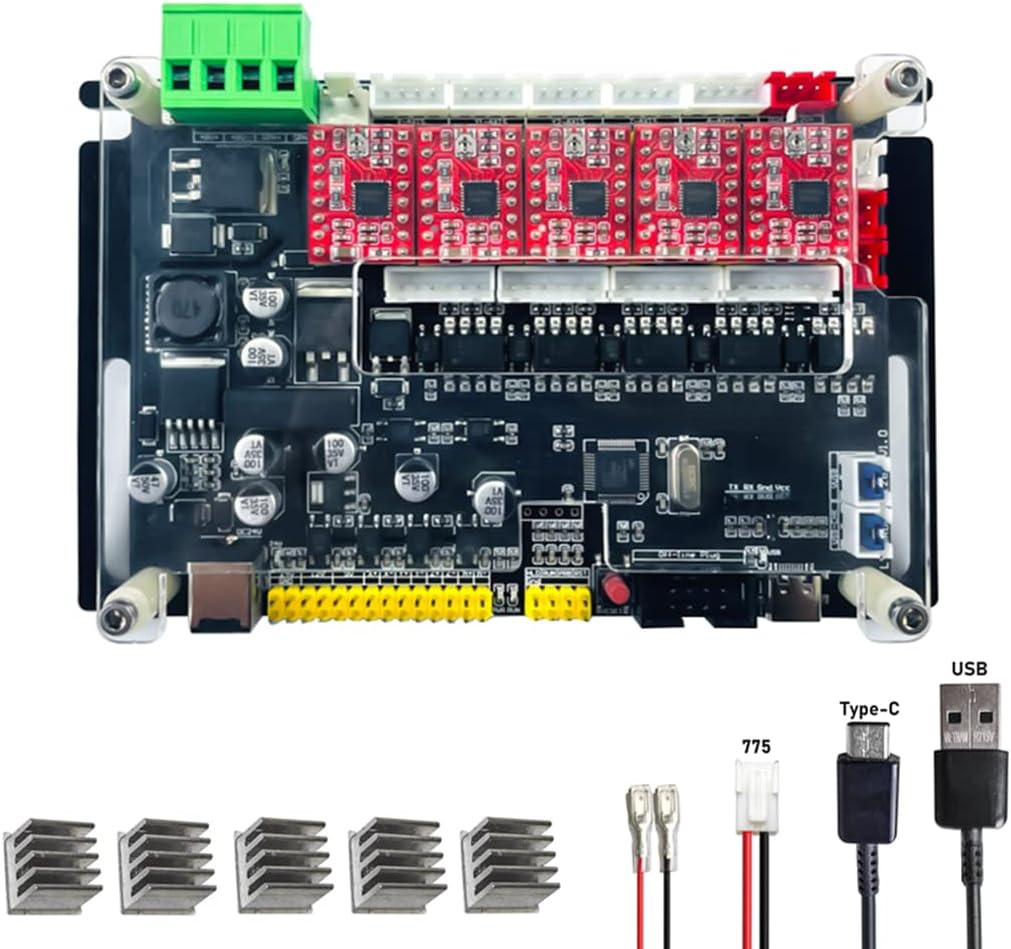 Four-axis five-drive control board features: ● This control board is a 32-bit MCU control board, running faster, the highest no-load speed reaches 40,000mm/min, better algorithm optimization, less vibration and more stable performance when the...

I can’t quite tell what’s going on with that board.

There are 5 drivers which means each stepper is getting its own driver. However, it’s possible that you cannot directly address Y2. Some hints include that there are only 4 external driver ports. This makes me think that Y is addressed as a single axis. The pins for Y2 are reversed which makes me think they wanted a hardware solution for moving in opposite direction for Y2. Finally, there is not a discrete limit switch for Y2. Seems to be a single shared Y limit switch port.

In any case, there are still 4 discretely controllable axes. However, it’s not clear what MCU is being used on the board so hard to determine how well this would be supported by specific firmware options.

I don’t really have any specific suggestion for boards as what you’re attempting is fairly unique. You may want to take a look at grblHAL compatible boards site:
GitHub - grblHAL/Controllers: List of controllers supported by grblHAL

From what I can see the grbl-teensy-4 may get you what you need but with the potential disadvantage of it requiring external stepper drivers.

Hmmm, maybe I can put a single 300mm slide in the center of each end of the laser (which is 850x410). So they would go on the 410mm sides. Attach a 20mmx40mm extrusion at its center to the slides in a vertical orientation. Then attach the laser cross member to this. That should impart some additional rigidity to the system. But would operate basically like a two post car lift. All I would need is Z and a cloned axis. So the “Annoy tools” board (Should) do it? LOL… now just the how.

A mechanical solution like what you’re describing would be easier to control. You’d just have to tune it mechanically. You could probably even do this with a single stepper if you had the right levers in place. You could do a mechanical solution at all 4 corners this way either with 1 or 2 steppers as long as you tied all of them together although you’d have to work out stepper size and gearing.

With this type of solution you could potentially do this on your single controller.

Another thing to consider is a purely mechanical solution with no controller. Maybe just a hand crank or even just a quick release type of adjustment with telescoping legs similar to a height adjustable table. I’m not sure what your specific needs are but if it’s mostly to just accommodate the occasional different sized materials then this could be easier/faster.

Well, I figure the slides are 70 bucks each, I already have the control board and power supply. I have the aluminum extrusion. So, other than cabling I can’t be too far away. Space is my real killer so a lot of purely mechanical options are not possible.

Haha. This wouldn’t be the first time that “parts on hand” determines the solution. Let us know how you progress.