Was burning photo's fine now it's not

Hi,
new member.
been testing on the lightburn software.
i was lurking on the forum for a bit and that got me going.
was able to burn some decent photo’s to wooden ornament blanks using the jarvis filter.
now I can’t get anything to burn right.
All I did was shut down my PC and power off the laser over night.
came back and something changed.
I just don’t know what.

I have an alhpawise c30 pro 3w laser.
it does have variable power.
here is my output from the console when the laser connects.
I noticed an eprom read error which explains why i have to set $32 to 1 every time i connect.
however both max power or spindle settings laser + lightburn are 1000.

one of those settings has to of changed to cause this.
I just don’t know which one.

here is a shot of what i’m getting from the laser.
I just re-opened the project to burn another because there was a spot in the wood on the last one i burned i wasn’t happy with and it just wouldn’t work.
any help?
Thanks in advance. 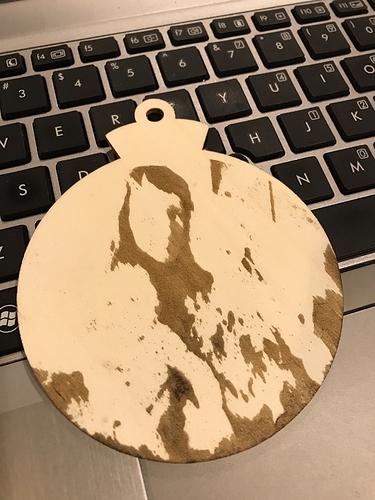 EEPROM read failed generally means that the eeprom on the board is gone bad and needs to be replaced (which isn’t practical - most people replace the whole controller). They do have a limited number of times that they can be written to, so if you’ve had the board for a long time that could be it. (and sometimes they just fail)

For the image, what settings were used in LightBurn?

really?
I just got the thing from gearbest.
only been testing on it for a few weeks.
yes i know cheap china stuff is a gamble but this wasn’t exactly cheap.

here are my burn settings. 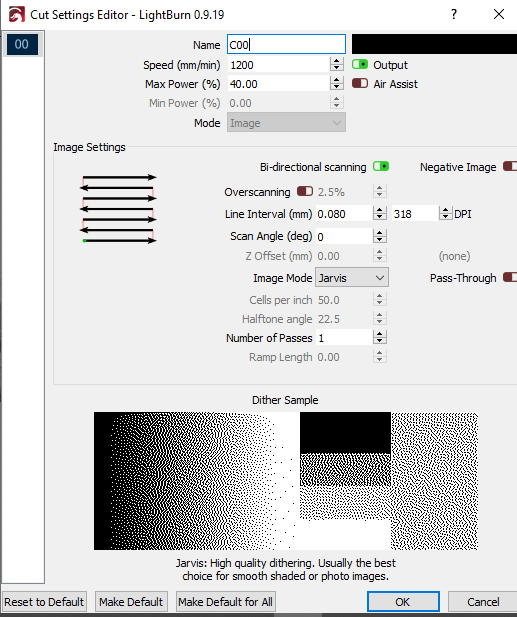 I’d start by dropping the DPI back to 254 and try that first. If you see gaps between the lines you can increase it, but you shouldn’t otherwise, and 254 might even be too high, depending on the focused size of the diode.

When you say eprom of the laser you mean the controller board correct?
I won’t tear it apart now but I have a ramps 1.4 setup from a CNC project that is probably overkill but will run GRBL.

I did pick up one of those usb microscopes and made the dot as round and small as possible and it does seem to be gouging the wood.

Could my focusing the beam better of thrown everything off?
I’ll drop the DPI down and give it another go.

Changing the focus will affect your settings, yes, but I would expect having a smaller focus would have improved things, not made them worse.

And yes, the eeprom is on the GRBL controller board. 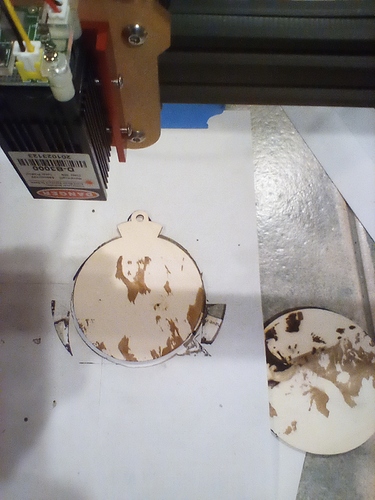 If the EEPROM is dead it’s possible that you’re having other issues as well.

I believe you are right.
I was watching it etch and it is clearly just turning on and off.
That and it isn’t retaining any GRBL settings i send to it or allowing me to flash the GRBL hex to it.
i’ll try to see if I can wipe the integrated arduino in it.

But, just in case I already have a grbl 1.1 board coming sunday.

Thanks for your help.

alright.
back in business.
My sainsmart controller came in.
flashed it to the latest 1.1 grbl.
it had the same drivers and steps as my old controller.
sure glad i posted the settings from my old controller here because i couldn’t read them.
etched a pic on cardboard just fine.
just back to fine tuning settings now.