I have a 60W red and black laser and I can’t seem to fix these wavy lines. 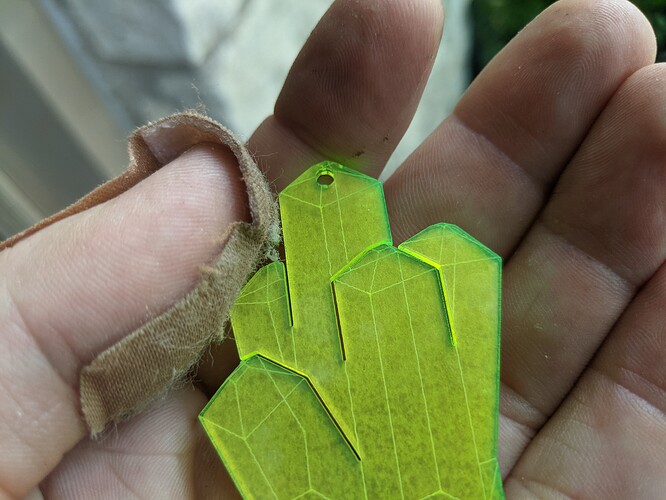 They look a little line sine waves, and they happen mostly on long straight lines. I feel like it’s some type of mechanical vibration or chatter. My mirrors are locked down tight. I just took out the lens to clean it and make sure it’s seated properly, and I just tightened all of the belts but I’m still getting the wavy lines. The belts now make a now “pong” sound like a bass guitar string. Is that too tight?

I wonder if it’s just the way the lens is mounted that’s letting it wiggle? It’s the lens/nozzle that came with the laser and doesn’t seem like great build quality.

Is it possible to upgrade the motor drivers? This is commonly done on 3D printers to make them smoother and quieter.

Try doing a square with cross lines inside (in the shape of X) with the same setting. Your x may not be perfectly square. 300 is usually pushing it for line work like this, but could be done. Make sure to grease the rails and tighten every single mounting bolt. I don’t know is upgrading drivers would help, this is most likely mechanical.
Also make sure that your laser is on a very stable base.