after finally finishing my DIY cutter with a Reci W2 90W tube and Ruida 6442 controller. Lightburn is absolutely amazing for it!

My problem is as follows… I’ve engraved a text (really doesn’t matter which) with fill mode with 60% laser power and the text comes out wavy left to right… same text at lower power - 15% comes out ok (as far as I can see at least). see picture (please disregard the burning… this was just an experiment 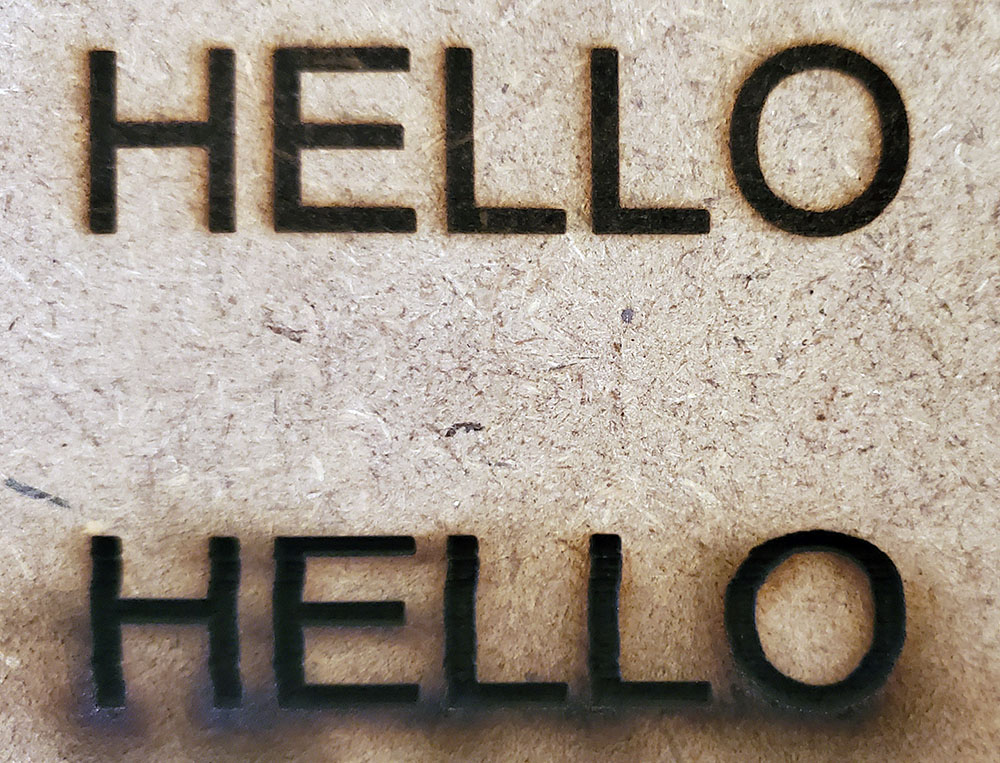 At first I thought that my motors are loosing steps, but that won’t explain why at lower power its working good, and other line cutting (even at higher power) seems to be working perfectly. only in text (haven’t tried picture engraving yet), when the laser scans left to right in succession, I can see this phenomenon. it almost looks like at higher power, the controller is somehow late to fire the laser at the right time and is not in complete sync with the movement? when I did the same 60% power in fill+line mode, again the fill came out wavy, but the line around the text letters came our perfectly (obviously not aligned to the letters fill) but that explain it can be loosed steps otherwise the location of the lines won’t be aligned to the over picture and they were… so a little stumped here…

These are my machine setting with window grab of the settings: 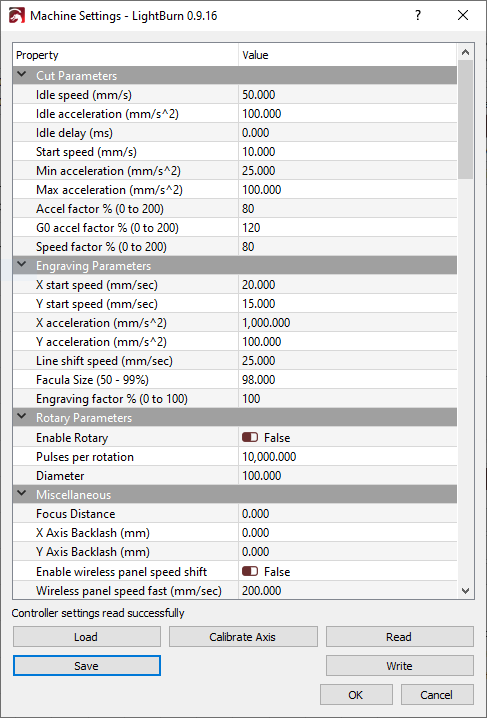 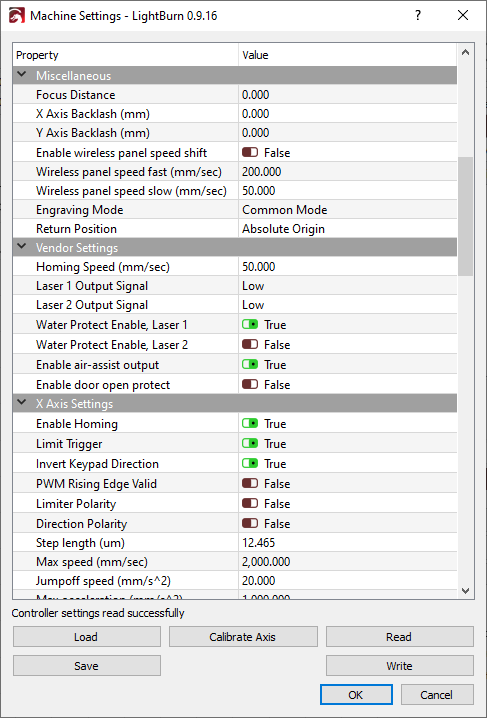 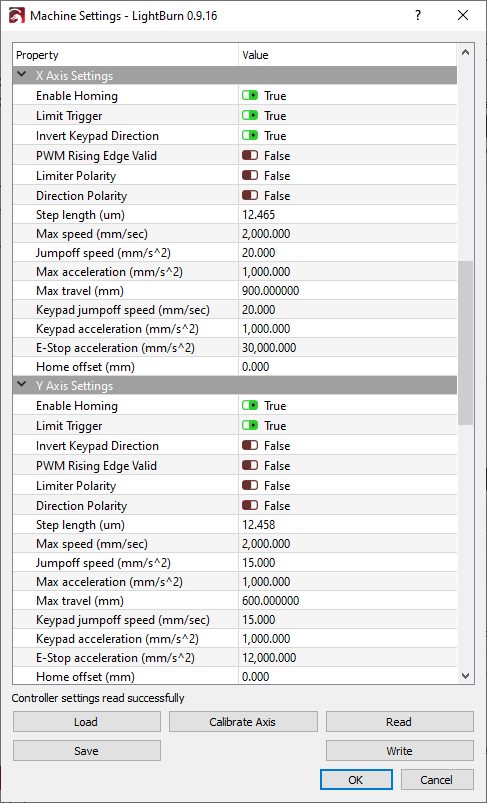 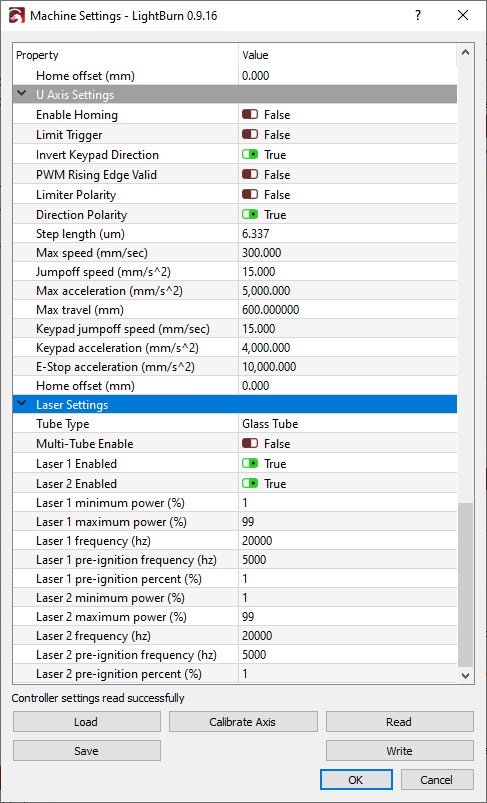 Would appreciate any collective wisdom about what can be wrong with this setup?

What’s the setup in your machine, power-wise?

Have you done a complete earth check? (checked every ground on the machine and both the grounding post and the centre-pin on your power cable)

What accessories have you got on the machine? Running air and cooling off the back?

FWIW I’ve got a nearly identical setup and don’t know what settings I’ve got, as I’ve never needed to go there to fix a problem - I don’t think it’s a configuration issue - it rarely is on RuIda’s unless they’ve been played with. I would say it’s environmental.

Thanks for the follow up! I’m using a single 24v 13A meanwell PSU to drive the steppers and controller and LED lights. Laser power supply from line voltage 220V. Air assist pump and cooling from line voltage as well. I didn’t run an earth check… What do you suspect?

You can put a 36V PSU in there for the steppers, that will make everything run better - the 24V controller wont be hanging off high-drain drivers/motors.

A bad earth/ground is the single biggest contributor to malfunction.

All PSUs, controller, anything with a gnd needs to be properly earthed to the chassis. Checked with a multimeter - should be negligible resistance - three or so zero digits below the decimal. The chassis needs to be similarly checked against the centre-pin of the power cable. Often cheaper machines neglect anything but a washer screwed to painted steel. Clean up everywhere you have an earth - a Dremel is good for this, but a screwdriver and some sandpaper does the job, too.

The chassis earth shouldn’t be used if you have proper western-style wiring with a proper earth for the house. You can use it to put a wire in your water reservoir if you aren’t using a refrigerated cooler - keeps the water from building up static.

When you ran the job with 60% power, did you also increase the speed? The 2nd picture you provided illustrates much of what resembles frame or belt slop.

No, it was actually the exact same speed. Just increased power… The 2 jobs were started with the exact same parameters (other than power) one after the other…

As for the power supply, I’m using nema 17s steppers so would think 13a 24v overall will be enough, but will check the ground again, maybe this will be culprit…