What to look out for in an air compressor

My air compressor on my Gweike LC1390N melted down and started putting out smoke. Is there anything to look out for when purchasing a replacement? I was thinking about running an air line from our shop, but I think I would need a regulator. I’m not sure what air pressure to regulate it down to. Also, the air compressor that came with it was a diaphragm one. I’m wondering if that matters and if I could just get some air compressor at Lowes. Any advice would be much appreciated.

I bought a Stealth brand compressor to replace the air pump. It has a water trap inline to prevent moisture from making it to the nozzle. Built-in onboard regulator lets me set the psi to about 15 or so. Even though it’s a quiet compressor, it’s a bit noisier than the air pump, but certainly effective. I wish I had known in advance that my hobby room would host a laser, as I could have had the contractors who remodeled it plumb in a line from my compressor in the garage. It would have been great to have the noise elsewhere and would have only needed a regulator and a water trap. The compressor I bought is oil-free and may be a two-cylinder diaphragm version.

I drain the water from the tank every use and there’s always plenty. The design of the one I have is poor, as the valve opening is partway up the curve, not directly at the bottom. I’ve shimmed the compressor to rotate the tank to put the valve at the bottom. Shimmed by four to six inches!

I just have one question: How do you know how much PSI to regulate to? Mine doesn’t have an internal regulator.

I turned up the pressure about 5 psi at a time. After 15 psi, there didn’t appear to be much difference in the cut and higher than that caused the hose to blow off on the back of the laser! The compressor has a gauge, but you can add an external regulator if your selection doesn’t include one. The big shop compressor I have came with an external regulator, but I’ve added three others for the branches I’ve added.

Thanks, Fred! That’s great to know.

You can change your input hose fitting to the laser nozzle to one with a screw adjust valve. They’re only a few bucks. 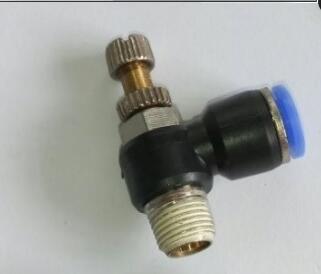