I’ve gone through the calibration numerous times. I’m choosing standard lens (not fish eye). I have the alignment circles taped to a clipboard, and the honeycomb bed is covered. My central images are great. My outside images are not - the numbers get a lot higher. I’ve tried focusing the camera - it seems to have a halo effect on the outside areas (it’s almost a greenish tint). There is nothing on the lens, and I even cleaned it.

Here’s a screenshot from the camera. The dollar in the center of the frame is fairly clear - but the ones on the outside areas are really blurry. In doing the alignment, I tweaked the offsets to get it to match the laser head position and it was repeatable (I used a 200% scale). But when I put that frame on the bed, the left side was off by 5mm but the right side was correct. So I’m very confused 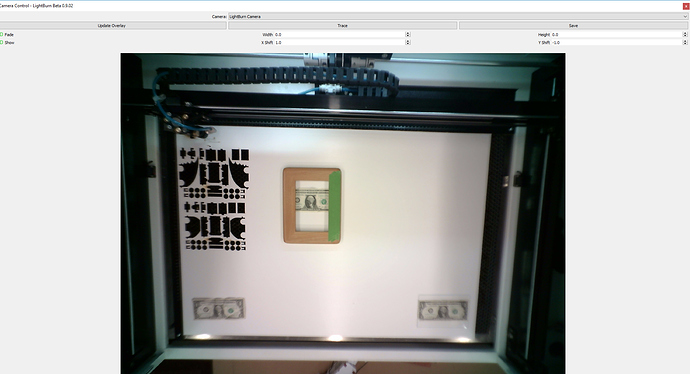 I did find this after I posted: Camera in edge is not focused

I am REALLY glad for what you guys have done, but I do wish some of this stuff was better documented. I feel like going through a needle in a haystack…for the last few hours.

I’d like to suggest adding a few info links in the software that would take you through the camera installation/focus/etc. There’s a lot of knowledge here, but it’s not linked to lightburn software.

Also, for the dot pattern, I still find it difficult to perform. It would be nicer if we can do it with the camera mounted and a pattern printed out and placed on the laser bed. Also, I’d rather see a grid overlay for the part of the screen we were supposed to be calibrating (I think Oz mentioned tick tack toe…gray out the rest of the screen, and show a box where the image needs to be displayed…the photos in the demo are confusing since that lid is closed).

I’ll play with it some more tomorrow

Changing the images is a good idea. I originally had small thumbnails / icons showing the tic-tac-toe pattern, but that was confusing for enough people that it was switched to the current set of images. I’ll do another pass over it.

You can do the dot pattern with the camera mounted, but getting good lens curvature info means being able to get the right coverage and positioning. In your case, printing the calibration pattern on a full piece of letter paper might make it big enough, but probably not. I’ve done it by putting a cardboard box or two on the bed of the laser and just placing the card on that - moves it closer to the camera, and holds it nice and still.

I wasn’t aware of the focus issue with the 90 degree lenses initially. I’m going to ask the manufacturer if this is normal or if they have suggestions or guidance here.

I agree that things are a bit scattered, and I very much want to improve this, but it’s time consuming and we don’t have the resources yet to devote to it.

I am having the same issues with 90 lens

Has there been any progress in determining of there is a defect in the 90 degree camera. I want to buy the 90 for my K40 top mount but dont want to risk purchasing one if there are issues. Sounds like the 120 will also work with the k40 but based on the math calculation it’s not as good of a fit.

Oz, thanks for the reply. I ended up switching out my 90* lightburn camera for my generic action cam (which ended up at 110*) but looked much better. I’m a bit disappointed in the 90* - the action cam is too heavy and usually falls off after a while, plus it need to be manually put into PC Camera mode…which is why I opted for the lightburn camera.

On 600x900 it’s too hard to focus everywhere, and then burry enough it defeated the purpose of wanting the camera

I wasn’t aware of the focus issue with the 90 degree lenses initially. I’m going to ask the manufacturer if this is normal or if they have suggestions or guidance here.

The manufacturer is aware of the issue and working with me to try to come up with something better suited.

Is it possible to buy a different lens for the 90 degree camera? What type of mount does it use? The image looks like it’s smeared with vaseline.

Have you taken the protective sticker off the front?

Have you focused the camera? The focus range is a bit narrow, and the focus is at a fixed distance from the lens, not a flat plane, which makes things a bit challenging. You kind of have to focus on a ring around the middle of the bed, instead of the bed center.

I tried the focus too. While the math told me the 90* was the right camera for my bed size (600x900), even with moving the camera closer to the bed to be closer to the ideal height, it still doesn’t look very good. I wouldn’t have bought it had I known how poor the focus was on these. I was hoping your vendor would offer to exchange it with a better one. I know you guys are a small business, and it’s not easy to eat them, but I’m not happy with the camera at all (I love Lightburn!!)

You can change the focus. You just gotta remove the glue on the lens and turn it to where you want.

I’ve tried my best to get the focus as best I could. I initially did it before I installed camera using text at the same distance from camera as the bed would be once mounted and then tweaked it once installed. I used the multi pages of text laid around the work area technique and went with best balance.