Already says i have a license

Ok this is goofy. I just bought the lightburn software (never had a cutter/engraver before to need it) and have 1 copy on my laptop and 1 on my desktop. The one on my laptop always said about the trial period and it ending but the desktop one never did. I put my newly bought license into the laptop one and everything seems fine but my desktop one says it is registered also…how can that be? I never input the license. I don’t know if I should uninstall lightburn and reinstall it to see if it fixes it or what. Any help is appreciated!!

It’s showing as already activated and good to go or it’s saying that it can’t accept the license because you’ve already exhausted all your activations?

It says it is activated and good to go.

Are you saying you had a separate trial on the desktop? Or did you activate both computers with the same trial license?

If the latter I suppose it’s possible that both computers were shifted to the new license but I don’t recall it working this way.

Ok so the license portal says 1/2 - this is weird. Maybe I should just uninstall from my desktop and reinstall fresh.

Oh and yes, I had one on my laptop and 1 on my desktop so I could work on projects on the go since it doesn’t work on android

Is it possible you’re still on a valid trial license on the desktop and it just hasn’t yet expired? You should not need to reinstall in any case. You should be able to update the license key as-is. 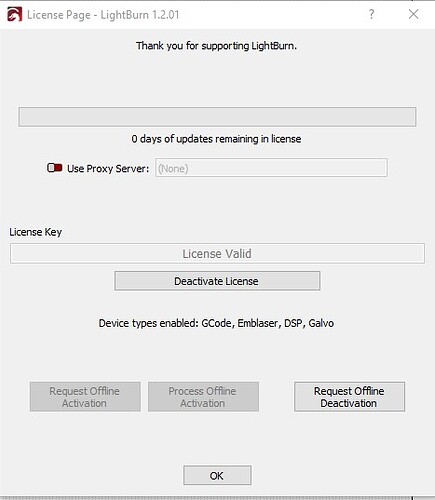 That is what I see even though I never activated the license on this computer only the laptop. I though I used the same lightburn from the creality usb drive and just updated to the newest version…

That’s odd indeed, especially since Emblaser is included in that which is only available from Emblaser directly.

A full uninstall and reinstall with a direct download from LightBurn may be in order in case there’s any question as to the original source of the file.

[EDIT]
I just checked the LightBurn version (1.0.06) included on Creality’s site and it’s a binary match to official LightBurn release. So not sure if that’s the same file included on the USB drive but if it is then I don’t think that’s the source of the anomaly.

It should be the same as that was the file i used on the laptop too. I don’t even know what Emblaser is LOL

I am gonna just uninstall and reinstall a fresh download from the website to see if it lets me put my license in.

Ok I reinstalled and it let me put my license key in right after so I think that fixed it…and now that license link you sent me says 2/2 for licenses!! WOOHOO!!! really weird though…oh and now it just says GCODE instead of all that other stuff too.

Thanx for the help!!!