Hello all, I really like the Lightburn software after a first-look. I HATE the Luban software that comes with the machine and am looking for an alternative. I installed the trial, but unfortunately the auto detect did not find the connected machine. I did manually create a machine profile but after trying all versions of GRBL could only achieve partial command success with GRBL LPC.

Has anyone had any success with this machine?

Thank you for any help!

I would be surprised if SnapMaker wasn’t using some kind of customized firmware. In order to properly support the machine we’d either need to purchase one of the machines, or have help from the company. If you want support for that hardware I’d suggest voicing your support with SnapMaker.

Hi Oz, thanks for the speedy reply.

I have to say that I’m impressed with the Lightburn software.

Since my first post I’ve been kicking this issue about for a bit and discovered the basic differences between your Marlin post-processor and the generated g-code from the Snapmaker software [SNS]. I have, after a fashion, got it to work.

The key differences are;

I have simple g-code files showing this more clearly if you are interested.

I did the necessary manual edits to prove my point. I’m still probing but essentially I think this is it.

Could this be added to a modified Marlin post?

I look forward to your reply.

If those are the only necessary changes, it probably wouldn’t be too hard. Are you using LightBurn to stream the code too, or just to write the gcode file?

Initially, got ‘some’ communication activity via USB streaming with a version of GRBL but not the expected responses to the commands, then I focused on the output g-code. Apart from header info, comments and such and an additional command that is supposed to turn on the laser cooling fan (which still activates without the code) there are only the changes I’ve found so far. Indeed, tomorrow I will hopefully get a chance to check whether the sort of working Marlin output now controls correctly via USB. I can of course send you the g-code file from the SN2. Referring to the issues prior, the result is that there is some laser burn between area fills such as text where there should be a rapid no burn move, almost like the laser power doesn’t fall off quickly enough when toggling the G1 power output. I took photo’s of the issue;

In the 2nd photo you can see the rapid movements between the digits (I used flood fill for this one)…here’s the SM2 code output;SN_output.txt (19.9 KB)

Regarding the G0 / G1 change, we didn’t do things that way because image engraving produces the cleanest results when motion is consistent, not constantly speeding up and slowing down, though it wouldn’t be a terribly hard thing to change.

I’ve managed to overcome the space-burn in the generated code from Lightburn which can be simply overcome with a quick macro or search/replace in a text editor.

Indeed, I can conclude that Snapmaker g-code only controls laser power simply by a using the P[xxx] parameter as a function of percent in the M03 command block and M05 in conjunction with a G0 rapid.

But by adding the P0 to your G1 with S0 overcomes this. So there is no need to resort to G00 rapid commands after all. This has now made it useful enough to work with Lightburn as a g-code generator.

I’ll run through a few different modes within your software just to make doubly sure but I’m hopeful! Assuming no show-stoppers I’ll grab a licence for this value alone.

I did do some control tests via the USB/serial and after finding the correct baud managed to get some predictable control jogging/homing.

Looking at the console, work co-ords are being returned but some commands yield a ‘?’. My next move will be to port sniff the data in and out and see what’s what. 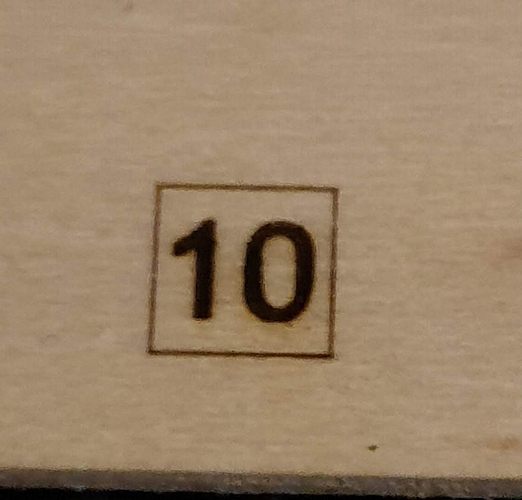 What baud rate did you use for the SnapMaker? Anything else in the device settings that you needed to change?

Type M114 into the console and press enter - that’s the command LightBurn uses for the position query. You should just see whatever the SnapMaker replies with.

Picking this up in message

Was there any update on this for native support? If it’s a simple find and replace in the g-code, what is it? I’m really hoping to use LightBurn for the snapmaker because the Snapmakerj software is extremely slow and cannot use the serial numbering functionality.