Anyone know what type of "RuiDa" Controller this is?

So today while attaching my D.I.Y. Solution of a Red Dot Beam Combiner into my G·Weike Cloud I took the opportunity of also having a look at the RuiDa Controller Board aaaaaand it doesn’t look like a RuiDa at all 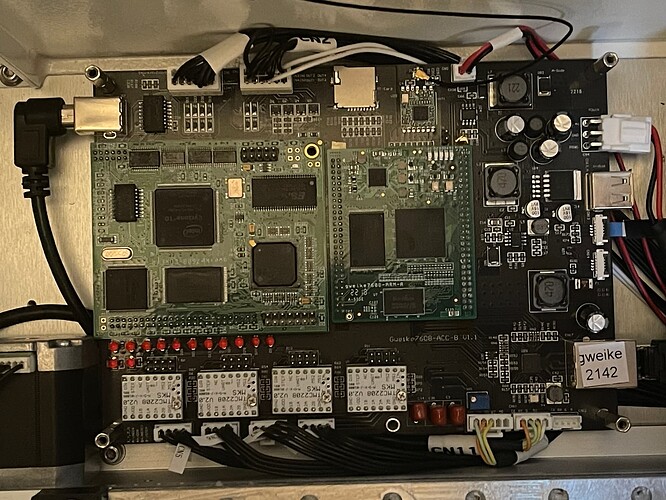 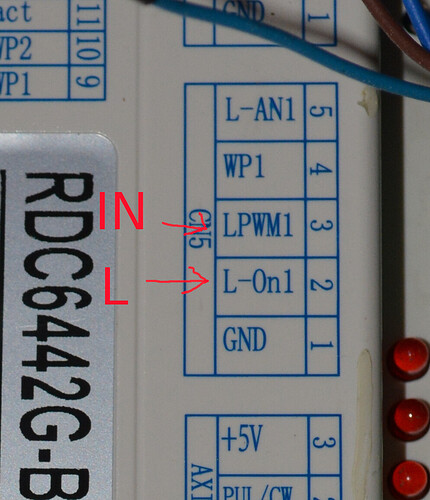 Same connector scheme… does it wire to the lps as noted in the photo?

Well, the board is labelled Gweike7608, in a Gweike machine. Sounds proprietary to me.

There are lots of these manufacturers machines around here…

It is very curious …

Looks like to me that the two daughter boards might be the “Ruida” components and it’s integrated into a custom solution with built-in stepper motor drivers and power delivery. Almost like an Arduino Nano plugged into a Shield.

The daughter board at the left has an Intel Cyclone which is a FPGA component which I believe is standard for Ruida controllers.

This makes sense given the space constraints in that machine. I was curious how they would have gotten all that in there.

I’m curious if the entire design is made under license or if the daughter boards are supplied by Ruida. The PCBs are even different color so it wouldn’t surprise me if they’re sold this way.

You mean the Chips on the green PCB? Should be doable while working on the Beam Combiner the next time.

This makes sense given the space constraints in that machine. I was curious how they would have gotten all that in there.

Oh, that machine is cramped AF I can tell you… The moving Tube + Mirror Assembly spans practically the entire width of the interior space with both ends just barely clearing all the components situated underneath them. The only location I found suitable for housing the 5V PSU needed for the Red Dot Module was on top of the Coolant Reservoir shy before the Tube reaches its furthermost position.

While having a look into the insides I noticed one of the Ribbon Cables rubbing against the Shaft interlinking the two Y-Axis Idlers in the Back but doing something about that is going to be a P.I.T.A. because everything is Zip Tied together in an awkward place with limited access

Luckily I wasn’t really fixated on adding one but still

I would guess there’s still a possibility to do this. There are quite a few exposed connectors and pins that might be accessible for this.

I can’t quite make it out from the picture. What are the open connectors at the bottom-right?

I’m also curious about the SD card slot. Wonder what that’s used for.

Assuming all of the protection interlocks are working … Maybe an led indicator shows the status of the interlocks?

I’d email the manufacturer and ask them about the led’s and how to determine why the red light is on.

Can @Durahl advise us on the led status lights? How are they identified on the pcb?

Which are lit when just powered up and also when it’s actually running a layer.

Wait, was there a stated problem? I thought we were just gawking at what was inside…

I was going down the path of comparing connection labels with my Ruida… First thing I noticed is that it has a CN5, which is the laser control on my Ruida. It also has a row of leds…

If we can relate them to another dsp, maybe it will help… As far as I know it’s configured as a Ruida… Possibly a lower cost Ruida product…?

Yes, there is no actual problem stated in this thread… my goof, guess I need some time off …

Can @Durahl advise us on the led status lights? How are they identified on the pcb?

Durahl cannot as they, or rather the entire board, are usually hidden underneath a Metal Cover I’ve just temporarily removed for the Photo.
The only functional Indicator on the Machine is the RGB Backlit Start/Stop Button and the fact that stuff isn’t happening

@jkwilborn The promised Pictures - I’ve added them to an Imgur Gallery to preserve their original size.
Lighting them up to be somewhat readable is a R.P.I.T.A. with what I had at hand