Anyone with CV cohesion smoothie experience

Anyone good at setting the info on the c3d smoothie board?
I bought the c3d rotary. Followed all instructions to update the code on my board but now has errors. I’ve been on the c3d forums asking for help for weeks and I am no closer to being fixed than when I started…
Ray at cohesion has been trying but he will ask a simple question and not come back to respond for several days. I’ve offered to pay for the help but to no avail. Cohesion has all their messaging blocked so I can’t try to go to them direct.
I’ve bought new memory cards and downloaded all the files directly from the c3d dropbox and I still can’t get it.
I’ve even offered to buy new memory cards with all the codes preloaded. I can only assume the crew over at cohesion are super busy so a trivial issue like mine must seem like a waste of time for them. They have always been very responsive and very helpful which is blowing my mind as to why I can’t get help this time. Sooo frustrating.

So if anyone has any idea on how I can get going again I’d certainly appreciate some help.

My goal is to get my rotary going. As well as fix the errors in my engraving (it scans parts that aren’t supposed to be leaving blemishes everywhere)

The two different boards likely have different firmware, or at least different configuration settings because they use different motor drivers. If you put LaserBoard files into a C3D Mini, or vice versa, it would likely cause trouble.

The engraving errors sound like what we’ve seen when you enable ‘Smoothie Clustering’ in LightBurn but don’t have support for it in your firmware. Try turning off that setting in Edit > Device Settings and see if that helps the engraving.

do have the mini. And yes, the errors are the extra engraving steps it’s taking.

I sent ray from cohesion pics of my board and how it’s configured. So I would certainly assume he would know to send me the correct files for my board.

As for the clustering. I just checked and I did have that on. So I just unchecked it. Ran the same file I’ve gotten errors on before and so far it’s perfect. Thank you!!!

(Really not sure how it wasn’t caught in all the conversations I’ve had over the past 2 weeks on the cohesion forum. (Which is where I was instructed to check that when setting up the rotary)

Now I need to set up the rotary properly.

Truly, thank you again for your help and immediate answer.

If he sent you a version of the firmware with clustering enabled, but it wasn’t installed correctly, you’d have the same problem (I’ve seen that happen before). I wrote the Smoothieware clustering code, so I’m very well acquainted with how it looks when it fails.

Yeah he sent me the dropbox downloads for the configuration files (where I was to add the slot A and delta information. As well as the firmware update.

So now my laser so far seems to be working as it was originally. Huge thank you! I suppose Its time to look at the configuration and see if I can figure out why the delta info isn’t taking. (I copied and pasted all the delta info that was on the cohesion forum. Sent pics of how and where I entered it and so far nobody has said I did it wrong.
So according to the reading I should have entered the delta info, put memory card back, plug in rotary. Then go to lightburn and type the go60f22 code or whatever it is and that should jog the rotary. So I am clearly doing something wrong or missing a step somewhere.

When you copied the new firmware to the card, was it named “firmware.bin” ? That part is important. If you renamed the file, it won’t find it to install it.

For jogging the rotary, the command would likely be:

If you don’t have the steps per degree set correctly in the config file, the rotary will not make one complete revolution, or it will go farther than one rotation. In either case you’ll need to adjust the steps value.

Ok. So I am giving myself mixed answers to give you.
Memory card 1 is the one that came with my board. It has the configuration text file and FIRMWARE in caps.
I am setting that one aside for safe keeping so k don’t lose all ability to use my laser.

Memory card 2. Started off empty and freshly formatted. That’s the one I’m trying to get operational( knowing I’m inexperienced I’d rather experiment with a separate card than the one that I know works, just kn case I mess it up) But I can’t get any response from the laser.
Looking in my download history I can see a couple times I changed the name and a couple times I didn’t. But on 2 of them where I didnt change the name it was saved as firmware.bin in lower case.
Then when i looked at today’s version is said firmware(1).bin (not sure if that’s proper or if my computer added the (1) to differentiate between the 2 identical files its recognizing.
So it showed in lowercase in my downloads folder, but I open sublime text
Open file and it shows up in caps.

What goes on the card has to be:

Lower case, no (1) or anything in the filename. You’ll also have a file called:

… that contains the configuration info. You can have other things on the card, but those two have to be there, and have to have those names. You put the card into the C3D, then plug it all in and power it up. When the C3D boots, it’ll see that firmware file, install it, and then rename it to:

…and that’s how you know it worked. If you already have a firmware.cur file on there, it’ll get deleted and overwritten with the new one.

Don’t keep multiple cards - that can actually make things worse, because if you put a different SD card into the machine that just has “firmware.cur” on it, the controller doesn’t do anything other than run with the firmware it already has, thinking it’s already installed it. It’s the “firmware.bin” filename that tells it “hey, install this and use it”.

Hopefully that helps you a bit.

I would also verify that when you copied the delta info into your config that those lines do NOT have a hashtag in front of them. Made this mistake myself before and it was very frustrating.(hashtag in front will comment out the line to the controller, turning it into a note)

This might be the problem. Do k remove all of the # at the beginning of all rows or of certain ones? I know there are a few scattered throughout

just the lines you added related to delta. there are a lot of features that overlap in the firmware depending on usage so those other comments are good. (like the extruder stuff when your running a laser, etc)

Whoo hoo! I have a working laser with a working rotary.
I do have a couple questions though.
I did a wineglass to test.
If I scanned at 90° it came out as one ugly line
If I scan at 0° it does the image, but its transposed backwards.

Are my settings wrong? Or do I need to get used to only using the rotary at 0° with the image flipped. In the picture both items should say test. You see a big line on top as the first test
And the word test transposed 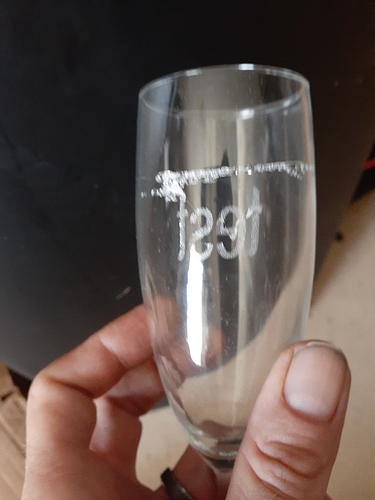 Scan at 0 degrees, but physically rotate the entire rotary attachment 180 degrees on the bed. Then it will engrave correctly.

I do have 1 final question.

Which setting do I adjust in order for my rotary to make a full 360° rotation. Right now it comes up a little short.
I know to set the wheel size depending on whether I’m using the larger 50mm wheels or the smaller 28.15 wheels.

You can easily test this in the Move window by doing this:

Set the distance to 360 (that’s degrees) and set the speed to something reasonable. Click one of the rotate buttons and the rotary should spin 360 degrees. If it falls short, you need a larger delta_steps value. If it overshoots, you need to set it smaller.