Automatic pause for cool down the laser

Hi,
I just have burned my new diode laser by too long working. Is it possible to program an automatic pause, lets say every 15 minutes, to cool down the laser ?

Hi Egbert,
You’ve probably crossed the boundaries of your laser, probably because it’s falsely labeled. It’s almost normal unfortunately.
My 5.5 mW is a real 5.5 mW and I have driven it often for many hours at a time without it getting hot at all.
(I assume the small fan on the top of your laser has run normally)

I’ afraid, you are right. I bought this 15W laser and it was one of these chinese types. I will get a new one from the seller of the whole machine. But I think it will become the same problem.
Bur your reply does’t answer my question.

It’s possible, but it would have to be embedded in the lowest part of the job sender in order for it to work across all types of job.

It’s possible now to use start / end delays on cuts to have those stop periodically. If you’re engraving an image, run it half speed and half power and you’ve accomplished the same thing as pausing occasionally.

Hi Egbert,
If you get a replacement from the same supplier, with the same power label you probably should not exceed 75% power, better 50%.
Here is a link with interesting reading about diode laser. https://odicforce.com/Background-and-Projects/Page-/-Category
You can also do a test where you see the real power curve of your laser, it is also very interesting and will surely surprise you.
If you get a 1.5W and the actual “only” is 750mW, it is still a pretty strong laser, for engraving it is super fine. But it doesn’t really cut into wood or acrylic, up to 2mm with some turns, I think 3mm plywood will probably go too, but it takes tons of time and the result is not pretty to look at. 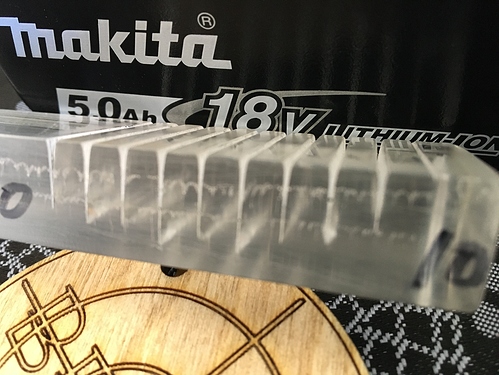 this is a test from my co2 laser but i think the power curve can be compared to that of a diode laser. Interestingly, the power after 70% power goes down(cutting depth) even though the mA setting is still rising! What I would say is that all lasers have an absolute max which is not necessarily at the end of the “setting scale”

I just made R&D on my defect lasermodul: It is a
|4500mW (4,5W) Nichia NUBM08 Laserdiode 445nm Blau 9mm
I measured voltage and current provided by the driver. It was not so bad adjusted.
The diode was mounted without any Wärmeleitpaste.
First when I receive my new laser is to mount it better and to control the working parameters and perhaps reduce them a little bit to 80-90 %.

Maybe anyone could answer my LB-question about pausing??

it explains a lot.
By the way, Oz has answered your pause question, look a little higher up here in this thread 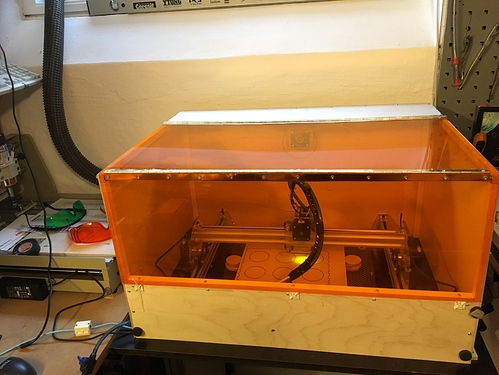 Hi Egbert,
I just found a picture that shows how I solved the problem with all the smoke that comes from laser cutting.
I built this box for my 5.5W diode laser for a little money, in the back you see a small 12V PC fan, an adapter for Ø50mm and a hose out the window. It worked incredibly efficiently for me.
At this time, I used my large workshop compressor to keep the nozzle and cut clean, it was overkill and made too much noise. Today I use only a small 12V fan with a 3D printed nozzle on my K40.
By the way, with the right power management for your new diode laser you won’t need any break time. If it is not oversteered you can run for many hours without it getting hot. I made a photo that took 3 hours to burn and my laser didn’t even get a bit hot.