Trying to make this houdstooth pattern integrate with circles. Tried using weld but basically made everything disappear. Then went back to Rhino to draw and when it was done, joined and exported as an AI file. One result was the better on the right, the other was after repairing holes on the left. Now that they are ready for scanning, I am getting the same error I always do in this situation. Why can I not join these shapes? Why is lightburn insisting that they are not closed? I can’t join by tolerance or by a line.
The shape should be intuitive enough but I always have issues like this. Is the join lines function that much trouble?

Many of them are already joined, but in really bizarre ways. If you exported as a DXF, that’s likely why. If you have options to export as SVG or AI, that would be better - they maintain connectivity better than DXFs do. 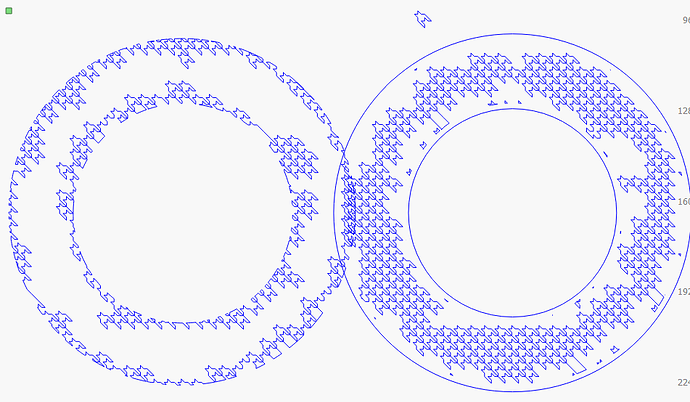 It should be possible to get the look you’re going for with the grid array in LightBurn:

After my last issues with bad joins, I fixed most of those problems by exporting to AI. The array function combined with the booleans was my first method to make this file, however making the rings weld with the pattern just deleted the pattern. But then I don’t know if I fully understand how the selection process works with booleans in lightburn any more than I understand why it fails to join.
Still, what can I ask that will make sense? I feel that there should be a reason why lightburn won’t close those shapes. I always draw in rhino. I always export to AI. Sometimes when I make a complicated file like this and import it to lightburn if fails to close. Even “Close with a tolerance” does not work unless its s 50mm line?! What is it here that lightburn does not like? How do I avoid it?

Randy - I have never used Rhino, but there might be some issues with it regarding it being a 3D program and exporting to 2D DXF. I know a few people who use it successfully when creating 2D artwork similar to what I do. I am pretty sure someone else using Rhino was having some DXF issues with Lightburn.

I created another “Houdstooth” pattern in Draftsight 2D CAD, and trimmed out the excess near the circles, and then created polylines of it all. I imported the DXF file into Lightburn, and set the DXF auto-close tolerance to 0. Lightburn imported it correctly. The repeating pattern looks a bit odd near the edges of the rings because a lot of pieces have to fall out in order for it to work.

I also imported the DXF file from Draftsight into an older version of a free program called nanoCAD 5.0. I exploded all of the polylines, and recreated new polylines from the lines, arcs, and circles using the Boundary command. nanoCAD is a typical AutoCAD knockoff (just like Draftsight) with it’s native file format either DWG or DXF. I generally use release 13 DXF. When I exported a release 13 DXF from nanoCAD and imported it into Lightburn, it lined up exactly to the DXF data I originally exported from Draftsight.

What you might want to do is import your Rhino DXF into nanoCAD, explode everything, and then use the Boundary command, and see if it creates linked polylines of the entire file. Just put your original data on a separate layer to delete later. Draw a rectangle around your imported DXF data, and then use the Boundary command. If you need any help PM me. I think you were pretty close in the image you referenced as being better. Lightburn does a good job of importing polylines, and if the CAD design is correct, you don’t need Lightburn to connect anything.

I appreciate the help RalphU. I figured out how to create the image in lightburn but still have no reason as to why an AI file would behave like that. It is 2D, so how can it not be joined. THAT is the issue I want to understand. I am likely to face this again. Because I draw 3D objects (not in this case) then lay them flat and outline trace that 3d object (make2d command in Rhino) it makes a 2d image on a single plane. From there is is exported as AI. I need the 3D part to design my pieces, sometimes involving a pattern that comes in from a second source. (usually a traced image from lightburn)
In the end I learned how to use the vectors grouped to work as Boolean operations to remove the excess pattern.
I feel that lightburn could easily add a trim command that would speed up this process. I know it was talked about but not sure what became of that idea.

Keep me posted if anyone figures out my issues.

Here is the working file I was trying to create if anyone is interested.

AI files can contain entities that aren’t connected. It all depends on how well the AI translator works. If you want to, upload the AI file that was a problem, and I can take a look at it in Illustrator. Or OZ can take a look at it, and see if it is something else in the translation.

If the entities aren’t connected in the AI file, it is pretty easy to see. Another issue with saved AI files is their accuracy is only to 4 places. That means that any AI file exported from CAD is accurate to 0.0001

Not much of a problem most of the time with lasers, but I never met anyone running CNC milling machines that designed 2D parts in Illustrator. I’m sure somebody does

Regarding the weld issue, ‘Weld’ (more commonly called ‘Union’) is “Keep the overlapping areas of these two shapes”. If you “Weld” a small shape that is fully contained within a larger shape, the “overlapping area” is the larger shape, so that’s all it keeps. It’s doing exactly what you asked it to. The operation you likely want is ‘Subtract’ (also called ‘Difference’) or ‘Intersection’: 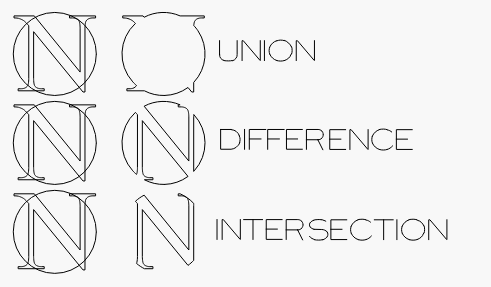 Thanks Oz. Gonna save that image. The part I never remember is the order of selection.

It’s always “A - B” (first minus second). On the other hand, click Undo, then click Redo and it switches the order, because no one remembers.

I use Rhino3D as well as a vinyl cutter. The same issue arises there with DXF to the vinyl software, so I set out to figure out the solution as it seemed counter-intuitive to save as, open with another software, manipulate more, save as… You get the picture.

What I found is issues around splines, polycurves, etc. While Rhino handles splines and polycurves sometimes the subsequent software has trouble. I even tried save as DXF then open with Corel only to find nodes not connected so the hunt was on.

The default save as dxf in Rhino needs to be tweeked a bit. Check to scheme to make sure the “explode polycurve” option is unchecked. See screen grab attached. 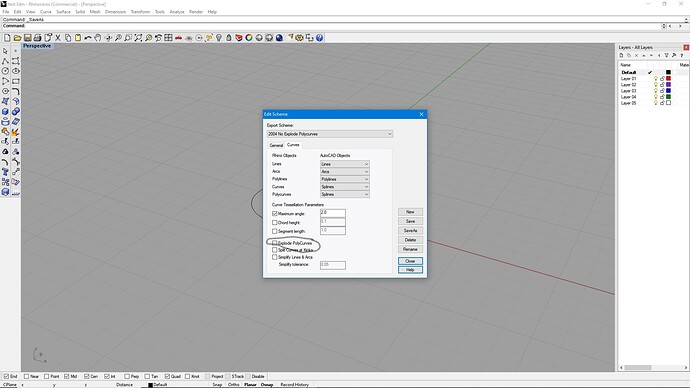 Please give me feedback on this possible solution because it is highly frustrating with both Laser and Vinyl machines!

I don’t have Rhino, but can you look at the drop down menus for Curves and Polycurves, and see if they can be switched from Splines to Arcs? If they can, I think that would be a better option. Then it would allow Lightburn to connect everything if the endpoints of the arcs touch each other.

The “curves” and “polycurves” options in Rhino can certainly be changed by the user. I did not find that those were as critical as the “Explode Polycurve” option. That option (explode polycurve) pretty much killed the import into my vinyl software via DXF. I have also found that without it being “unchecked” (which means don’t explode polycurves), it behaves erratically when importing DXFs into other software including: CorelDraw, InkScape, and LightBurn.

While the “nodes” are coterminous they do not appear to be connected. CorelDraw and others have a “connect curve” which converts the individual segments together but not always in an intuitive fashion.

I do have to change the curve and polycurve settings to import into software that does not support Bezier curves or splines. I leave that to the devs to say whether LB supports Bezier/Splines.

I would never use DXF as import into CorelDraw. I learned my lesson on how it incorrectly imports DXF polylines that contain arcs that turn more than 90 degrees. Lightburn imports them correctly. I only work with polylines in CAD, because I know how to make them “appear” to be splines or bezier curves. Many CNC controllers I used to design for (in the past) did not do a very good job with splines and bezier curves. I know that Rhino uses the DWG/DXF routines from the Open Design Alliance. They were one of the founding members.

From my past experience using DXF, the entities that allow for the best success in any translation are lines,arcs,circles, and polylines. I know that DXF polylines that contain arcs and straight lines work well with Lightburn. They don’t with CorelDraw 20119. Maybe Corel fixed it in CorelDraw2020.

I concur with CorelDraw as I use 2018 version concerning this issue. I suspect that on the typical scale of our lasers, the difference between using lines/arcs and splines/curves is probably more mathematical than anything else.

All in all, I found that changing the curves/polycurves to lines/arcs was not as big of a culprit in importing DXF files as the “explode polycurves.” Once I changed that parm, my import issues with other software including LB seemed to rectify themselves.

Further to your point, it is true that knowing a bit more of the “guts” of the CNC controller as some handle somethings better than others.

I would be interested if the OP, once changing the export settings, sees a better connection with an import into LB.